Home Woman Jake Paul’s ‘Disrupting the Space’ of Boxing — But Why Is He... 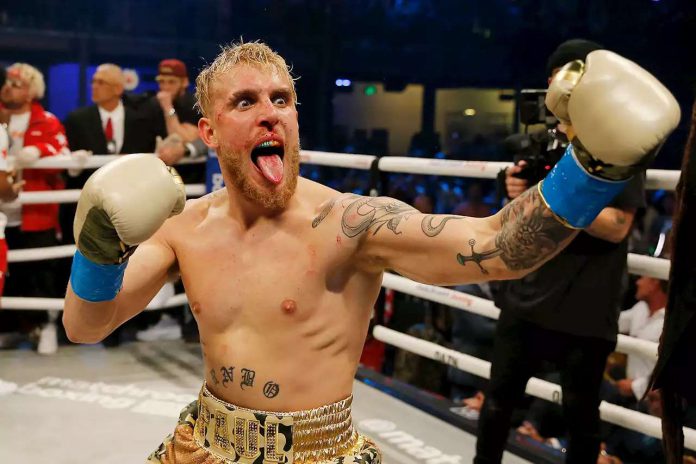 airs on pay-per-view
.
Finding his place as a prizefighter is not something Paul’s inner circle necessarily saw coming. However, it also didn’t take them by surprise.
Related: Watch Jake Paul vs. Ben Askren Triller Fight Club on FITE TV
Paul’s mother, Pamela Stepnick, admits to some initial trepidation regarding her son’s shift in career path, but also knew of his craving for competition. Once she became educated the venture wasn’t being done on a whim — and saw the direct positive impacts it had on Paul’s life — his choice was hard to deny.
“I was concerned,” Stepnick says. “I would’ve never chosen boxing as the athletic event for my kids to choose as a career. I always thought Jake would do something athletically, but I always thought it would be football. I think he’s happier being an athlete and having boxing in his life. YouTube, and all that stuff, it’s competitive in a different way and it’s not competitive, to me, in a healthy way. He was good at it so he just kept doing it, but I don’t know if he was that happy.
“He didn’t finish his senior year in high school, so he didn’t get to go to state wrestling. That was his goal. He never got that closure and I really think — a lot of the world doesn’t think of him as a pro athlete — but they didn’t see what he was. They just see him as a YouTuber or an actor. A lot of people are underestimating his ability as an athlete.”
One of the chief complaints
about Paul’s boxing run thus far has been his untraditional path. Most who enter the sport build up a record through fighting beginners with similar career ambitions and journeymen who offer various types of skill sets.
Paul has no desire to follow the beaten path, though. Taking on Askren, who has no professional boxing bouts but had a world-class wrestling career before becoming a decorated MMA fighter, can bring together multiple audiences.
The fact Paul vs. Askren is getting more attention than a good chuck of matchups between proven boxers rubs some purists of the sport the wrong way. Paul’s manager Nakisa Bidarian, who is the former UFC Chief Strategy Officer and Chief Financial Officer, argues his client’s involvement in boxing brings tremendous upside.
“It kind of confuses me when people talk about disrespecting the sport or not paying his dues,” Bidarian says. “You definitely have more negative voices in boxing than positive, but you also have very powerful voices like Mike Tyson, like Roy Jones Jr., like Evander Holyfield — legends of the sport who have clearly said, ‘This is a good thing, you should embrace this.’ There is an audience for this. It’s not necessarily about it being good for the sport because it’ll bring new viewers in, it’s just expanding the sport as a whole. It’s expending the audience, it’s expanding the reach.”
To find success in any avenue in life, commitment is key. It’s easy to hypothesize that Paul doesn’t need to be fully invested in boxing, because he’s got a lucrative fallback. It can be a challenge for someone with money in the bank to manufacture motivation, especially when there are countless athletes who have to invest years to gain a sliver of Paul’s notoriety.
Paul promises he isn’t taking a half-hearted approach, though. His head coach, BJ Flores, who is a former championship-level boxer, has been impressed by his pupil’s dedication and growth given his late start in the sport. He’s not hailing Paul to be something more than he is so early in his career, but in comparison to the outside perception, predicts the world will be “shocked” at what Paul can do when the gloves are tied on.

“There’s no substitute for hard work,” Flores says. “Hard work beats talent when talent doesn’t work hard. After 16 months of working together he’s really starting to get into a good rhythm. He can do a lot of things in there a guy with his experience level has no business being able to do. I don’t coddle him or take it easy on him. I expect a lot from Jake, and he gives me his best every single day. He hasn’t let anything distract him.”
Minimizing distractions has not come without struggle for the 24-year-old. Temptations to break focus are presented left and right, but he claims boxing is the priority above all.

That means sacrifices elsewhere in life are necessary, and although that’s not always the easiest thing to do at his age, it’s what’s required to evolve into the fighter he aspires to be.
“This isn’t even a job — it’s a lifestyle,” Paul says. “I’m sacrificing so much for this. It’s not one thing; it’s everything added up. It’s the diet; it’s the ice baths; it’s the recovery. It’s the saying no to every opportunity to go hang out with celebrities or girls. It’s the saying no to making music, filming YouTube videos, to going to sleep earlier so you get a good night’s rest. Showing up and working your ass off, being alert. I don’t know what else could really compare to being a professional fighter. I think it’s probably the hardest thing in the world you could possibly do.”
The challenge of finding boxing success isn’t guaranteed merely through hard work. Paul’s brother knows that first hand.
Logan Paul
, who has blown up as a major YouTube personality right alongside his younger sibling, tried his hands at a boxing match in November 2019, and came out on the losing end.
Victory is never promised no matter the level of preparation, but Logan has seen up close what his brother is capable of. To him, it’s only a matter of time until the world gets exposed to it when the stakes are real and the cameras are rolling.
“The biggest misconception about Jake is that he doesn’t have a boxing career, because he’s ‘not a boxer,’ ” Logan Paul explains. “This fight will prove to everyone just how serious he is about pugilism. He’s a monster. All he does is train. It’s the only thing he cares about.”
Time will be the revealer
of all when it comes to Jake Paul’s boxing career. He vows this is not just a phase, and he’s in it for the long haul, with the potential to add “hundreds of millions” to his bank account in the coming years. It’s a unique opportunity in front of him, and he doesn’t want to squander.
Jake Paul’s backstory has put a far bigger spotlight on him than any 2-0 boxer has the right to have. A segment of that spotlight consists of people hoping to see him lose in humiliating fashion, though, and he’s doing everything in his power to make sure that never happens.
“Anything you do in life, people only take you as seriously as what you’re doing,” Paul says. “I’m taking it more serious than anything in my life and more serious than a lot of pro boxers even do. I’m dedicating my life to this and I’m young, I’m hungry. I’m disrupting the space with who I am and what I’m bringing to the table from a marketing and branding standpoint. Everything is perfectly teed up.
“A lot of guys when they’re in a position like this where the sky is the limit or there’s a huge, bright future — a lot of guys fold under pressure. A lot of guys lose focus, they get comfortable and they think they’re invincible. I’m being very cognizant to not make any of those mistakes.”
For the critics who question Paul, he doesn’t care much for your opinion. “A hater has never signed one my checks,” he says, but Paul is aware why his history and brash personality may instill the belief he’s not a real fighter.
Paul expects the public perception to sway eventually: If things go as he expects, the fights will get bigger, and the opponents will get tougher. With that, however, will come moments of adversity inside the ring. If Paul fights enough, the day will eventually come where he’s knocked down — or knocked
out
. He anticipates his doubters will be surprised when he gets back up and continues to push forward.
“I dream of those moments,” Paul says. “I don’t think it’ll happen this fight. I think down the line when I have a more formidable opponent, when we go into deeper waters or I get hit with a big shot, I’m ready for that. I love that. That’s part of this business. No one has been able to do that to me yet. When, and if, they do, I’m prepared and that’s just going to bring the best out of me.
“People are going to see the real side of me and out of that will come respect. People will start to catch on that, ‘This kid is not a fucking joke.’ I’m a real dog. I’m a real, bona fide, motherfuckin’ dog.”

Make This Healthier Barbecue Sauce and Put It On Everything You...