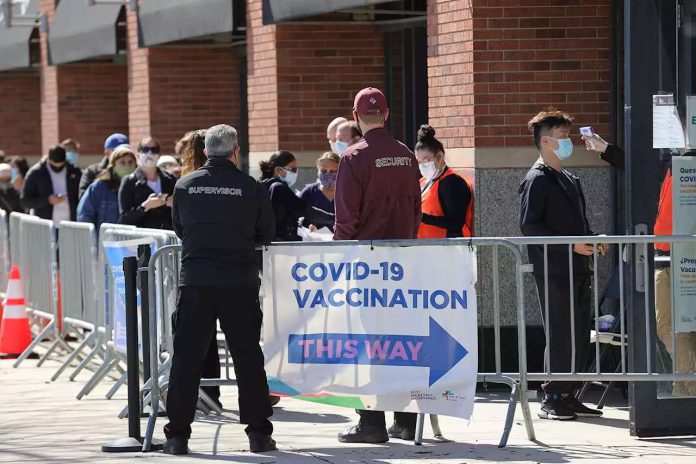 Vaccinations for the coronavirus are supposed to be free and available to all Americans regardless of insurance or immigration status. For some, that isn’t how it has been playing out. Here are com…

call an HHS hotline
to report any billing-related violations, but referred oversight questions to HHS. HHS didn’t respond to requests for comment.
Fear of potential bills has kept others from getting vaccinated to begin with. Nancy Largo of Bellport, New York, doesn’t have insurance, already carries about $7,000 in medical debt and has been out of work for almost two years because of a workplace injury. She knows the vaccine is supposed to be free, but she’s still worried. “What happens if they charge me?” Largo asked in Spanish.
Largo doesn’t speak English, and medical providers don’t always have Spanish-speaking staff, so she’s not confident that she’ll be able to ask questions about billing and other details once she gets to a vaccination site.
Though nearby pharmacies are offering the vaccine, Largo is limiting herself to finding a shot through one clinic that she knows treats people without insurance and has Spanish-speaking staff. So far, they haven’t had an appointment for her.
In Nearly Every State, Providers Are Required to Believe What You Say About Underlying Conditions.
Sara Waldecker was worried about how she could prove that she was a high-risk patient eligible for a Covid-19 shot. Michigan had just opened up vaccinations to anyone ages 16 and up with disabilities or medical conditions that qualified. Waldecker, 37, said that a childhood illness left her with lung scarring and asthma, but she wasn’t sure how to get hold of those medical records because “the primary doctor I saw, up to five years ago, has died.” After that, Waldecker switched hospital systems, and her old records didn’t transfer with her. Then Waldecker’s husband lost his job during the pandemic, leaving them without health insurance. She said she couldn’t afford to see a doctor and have tests run to get diagnosed again. She’d spent the entirety of the pandemic isolated, buffeted by conflicted emotions. “If I catch it, there’s an overwhelming chance I’m not going to make it, but I also feel guilt from keeping my kid from her favorite places,” she said. “She’s healthy, the rest of my family is healthy — I’m the weak link. I’m the one keeping them in isolation.” In fact, Waldecker didn’t need to prove anything. In Michigan, “individuals attest to any medical conditions upon registration,” according to Lynn Sutfin, public information officer for the state’s
Department of Health and Human Services. “They do not need to provide proof.” That information is not evident on the state health department’s website, nor is it clear on the website of the health department for Macomb County, where Waldecker lives.
ProPublica surveyed all 50 states and found that, among those currently providing vaccines to individuals with underlying health conditions, almost all only require a patient to self-attest that they meet the criteria, and do not require any documentation or proof. Florida is one exception. It limits eligibility to “persons determined to be extremely vulnerable by a physician” and provides a form for doctors to fill out.
In Delaware, health providers and hospital systems are the only places where patients with health conditions can get a vaccine. “Delaware health providers, including hospitals, have been advised to use their clinical judgement to vaccinate individuals 16-64 with underlying health conditions, as they will have access to the patient’s medical information,” state public health department spokesperson Robin Bryson wrote in an email.

Even in states that only require an attestation of someone’s underlying condition, that information was hard to find on state websites. Many did not mention it at all, and ProPublica was only able to learn about it by contacting press offices.
Whatever a state says, however, specific vaccination sites may sometimes ignore official guidelines. When Ric Galvan, 20, went to the Alamodome stadium in San Antonio, Texas, for his shot on March 2nd, he recalled, he was questioned by a firefighter who was helping with intake: “He first sort of condescendingly asked, ‘How old are you, buddy?’ — likely because I’m young.” Galvan provided his ID and stated that he had chronic asthma. “He then asked if I had an inhaler or some sort of proof of having asthma, to which I said, ‘No, not with me.’ He then told me that the vaccine is only for ‘real asthmatics’ who ‘need their inhaler with them at all times.’ ”
“As someone who has been under pulmonologist care since I was 4 years old, this really upset me,” Galvan said. He tried to push back, telling the firefighter that none of the confirmation emails said anything about medical proof, but the firefighter told him to leave the site. A full-time student who also works part time, Galvan added that he was frustrated because it had been so hard to get an appointment in the first place, and now he had to start over again.
“We must ensure individuals that have registered do in fact meet the criteria set by the state of 1A and 1B. This process entails verification of name, age, and if under 65, qualified pre-existing conditions,” replied Michelle Vigil, a spokesperson for the city of San Antonio. “Unfortunately we have seen instances where these conditions cannot be verified. In order to ensure that we are in compliance we have had to turn a very small number of people away.”
But Texas sites aren’t supposed to ask for proof of underlying medical conditions, according to Douglas Loveday, spokesperson for Texas’ health department. People seeking vaccinations “can self-disclose their qualifying medical condition,” he said. “They do not need to provide documents to prove that they qualify.”
Juany Torres, a community organizer and advocate in San Antonio, said she’s heard of several similar cases at the Alamodome.“ Some undocumented folks that showed up were questioned about their diabetes or their asthma, and they were turned away and lost their appointment,” Torres said. They had been diagnosed in their home country and didn’t have their medical records on hand, she said. None have health insurance or a primary care doctor in the U.S. “They lost the time they had taken off work, they were embarrassed, and I had to re-convince them that they were worthy to go and that they should get their shot,” she said. In Texas, at least, requests for medical documentation should no longer be an issue: On March 29th, the state transitioned to allow everyone age 16 and older to sign up for a vaccine.
In This Article:

Here Are All the Winners From the 2020 AMAs