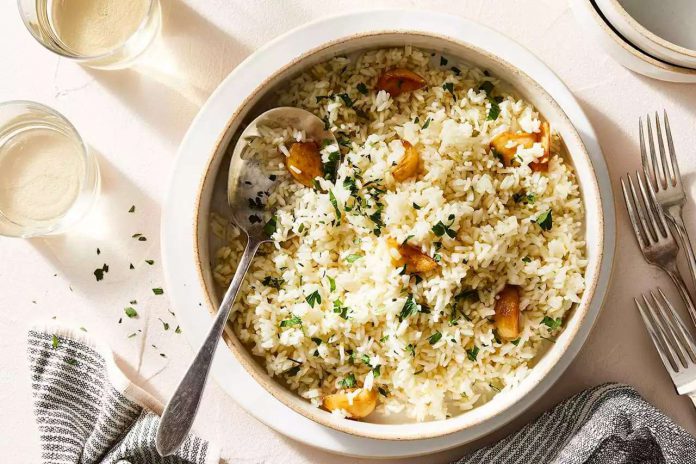 Michael Twitty’s secrets to maximum flavor—and the roots of a Southern staple.

—with richly flavored, repeatable recipes for everything from Hoppin’ John (and its lesser-known cousin Limpin’ Susan) to rice waffles and his grandmother Hazel’s Country Captain.
Highly repeatable.
Photo by Julia Gartland. Food Stylist: Anna Billingskog. Prop Stylist: Amanda Widis.
He also tells the stories of where these rice dishes find their roots, and, notably, of the impact African cooks and farmers
have had in the centuries following their enslavement in the United States. Twitty’s grandmother’s red rice (sometimes misnamed Spanish rice), uncoincidentally, has much in common with the jollof rice of his distant ancestors in Sierra Leone.
In a similar way,
this week’s Genius Recipe
stems from a sweeping category of Southern rice dishes called pilaus or perloos—“seasoned rice cooked in stock, often with other ingredients,” as Twitty describes them. But this one isn’t canon: It came from playing with the Meyer lemons he loves and the herbs shooting up in his garden. “That’s just me messing around in the kitchen—that’s just me being silly,” he told me as we chatted for this week’s episode of The Genius Recipe Tapes podcast. “I would love to be able to say ‘Yes, it’s from the lemon people of the lemon island and their lemon ways, their lemon heads,’ but that’s not where that’s going.

But Twitty’s recipe builds on pilaus past, and has come out brightly flavored and perfectly cooked in every pot I’ve made, single and double batches alike. He starts by rinsing the rice a few times, as so many cultures do, so that the grains shed any loose starches brushed off in transit. Then he adds them to an already-simmering base of stock, lemon juice, fresh herbs, and salt.
“It’s about making that rice ready to just be a sponge for the flavor,”
he told me. At the end, a little butter, lemon zest, and chopped parsley gloss it up, and every grain is plumped with flavor, yet wholly distinct.
Then he pairs it with a sleeper-hit topping: candied garlic—which requires no candy thermometers, and is as simple as simmering the crushed cloves in a lightly sweetened stock, then crisping in olive oil. It will remind you of the melting, savory swell of roasted garlic, but with bronzed, sticky-crisp edges. You will want more.
Altogether, this rice sits cozily next to fish, chicken, chickpeas, or roasted vegetables, but doesn’t demand all that much of them. They don’t need to bring fireworks of flavor: The lemon rice—or lemon perloo, if you like—has done all of that for them.

The Naya Rivera is presumed dead as the search becomes a...

Join us for Home Workout Warrior! A full 4-week fitness and...