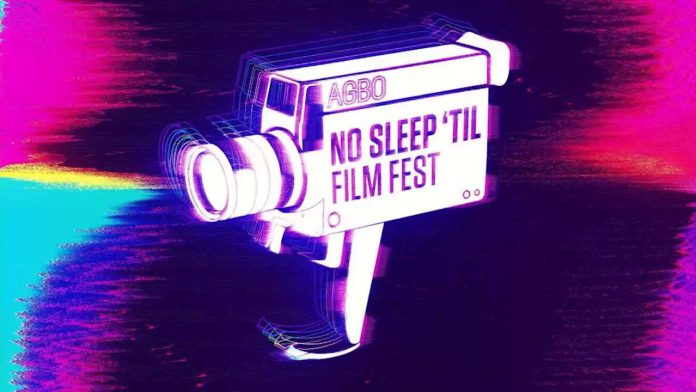 On Wednesday, AGBO announced that it is launching “No Sleep ’til Film Fest,” a filmmaking competition and festival, geared toward emerging artists, which will take place between t…

AGBO
announced that it is launching “No Sleep ’til Film Fest,” a filmmaking competition and festival, geared toward emerging artists, which will take place between the 16th and 18th of April.
For the independent film and television production company, the virtual short film festival reflects an ongoing commitment to championing newer creators. With submissions opening on the 16th and closing on the 18th, creators will have 48 hours to craft a bite-sized film, which runs three minutes or less, while observing the latest social distancing guidelines.
Three winners, announced on May 7th, will be selected by a panel of judges including AGBO Co-Founders and Chairmen Joe and
, Vice Chairman Mike Larocca, Co-Presidents of Story Christopher Markus and Stephen McFeely, and President of Creative Angela Russo-Otstot. Subsequently, the top films will premiere across AGBO’s social channels.
Related Story
‘Avengers’ Directors The Russo Brothers’ AGBO Strikes Multi-Year Podcast Deal With Spotify
Each filmmaker in the top three will receive Final Draft screenwriting software, and will be invited to join the AGBO Storytellers Collective, an alumni network of participants from other AGBO fellowship programs. The second-place winner will receive an electric bike, courtesy of Story Bikes, while the first-place winner will earn camera equipment from RED and a storyboard sketch of their short from storyboard artist Anthony Leonardo.

“We consider it a privilege to watch the work of tomorrow’s storytellers, especially when crafted with this level of ingenuity and in the spirit of rising to a fun challenge,” said Russo-Otstot. “We can’t wait to see what the filmmakers come up with and we are excited to share their talents via this new platform.”
Recently, AGBO produced Apple TV’s harrowing drama
Cherry
, starring Tom Holland, which was directed by the Russo Brothers, co-written by Russo-Otsot, and released on Apple TV+. Currently, the company is in production on Netflix action-thriller
The Gray Man
, which the Russos are also directing. That title’s cast includes Ryan Gosling, Chris Evans, Billy Bob Thornton, Alfre Woodard,
Bridgerton
breakout Regé-Jean Page and more. On the TV side, AGBO is at work on
Citadel
, an action-packed event series produced with Amazon Studios, which stars Priyanka Chopra and Richard Madden.
The creative prompt for “No Sleep ’til Film Fest” will be released on April 16. To find out more about the competition’s rules and guidelines,

Travis Barker was Visiting 03 Greedo in Prison During El Paso...