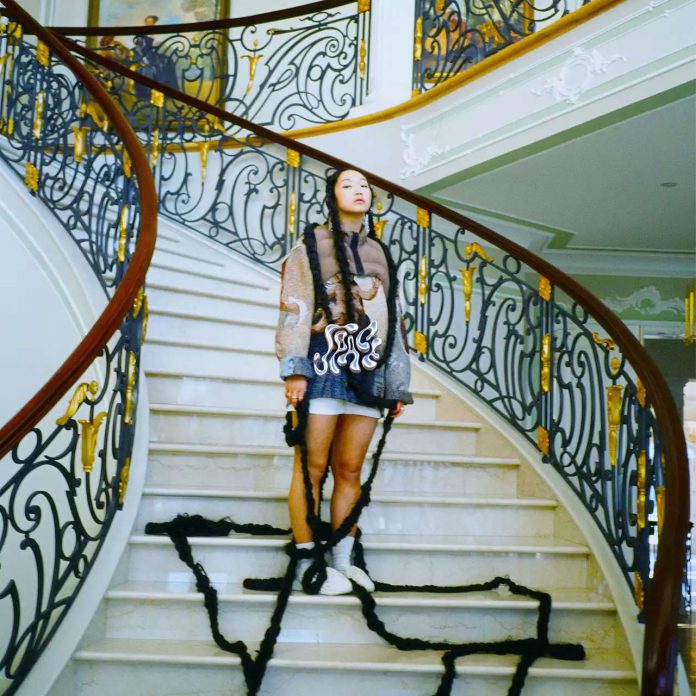 MATHIAS ROSENZWEIG
Budding r&b artist and rapper, Audrey Nuna, celebrates her 22nd birthday with the release of her new single, “Space.” Arriving today, the tune is paired with a captivating music video that moves through a series of stunning frames and looks, celebrating her Korean-American identity. The picture was directed by Loris Russier with Nuna and Khufu Najee helming creative direction.
A mellow, and soothing ballad, “Space” sparks the New-Jersey raised musician’s first official release of 2021, and sneaks fans a taste of what’s to come in her forthcoming project.
This new single proceeds Nuna’s last song, “damn Right” which landed her praise across many revered publications. Not far behind the entrancing track were the experimental and razor-cutting, “Long Night,” “Paper,” and “Comic Sans” feat. Louisville rapper, Jack Harlow. National Public Radio proclaimed her as “one to watch” in their list of women in rap who left their mark in 2020. Nuna’s versatility across rap and r&b deems her a force to be reckoned with.
Now, with the drop of “Space,” Nuna continues to transcend conventions and push boundaries, paving the way as one of the first female Korean-Americas r&b artists breaking into mainstream culture. Her foray into music can tracks back to taking voice lessons in elementary school, and at age 10, the first generation Korean-American landed her first gig, singing “America The Beautiful” during the U.S. Open Tennis Tournament. Quite a few year later, in high school, like many of her artist peers, Nuna began posting cover videos via Instagram, grabbing the attention of manager/producer Anwar Sawyer.

The two have since written over 100 songs together.
The genre-bending supernova, has since taken time off from enrolling in New York University’s esteemed Clive Davis Institute. Nuna is now signed with Artista Records under Sony Music Entertainment.
Below, she talks to us about all things New York, the future and bringing this latest endeavor to life.

Can you tell us about the inspiration behind this song?
AUDREY NUNA
The sonics of the instrumental really inspired me. as soon as i heard it, it made me think of being underwater, away from people.

Did you already see many of the visuals while writing the music?
AN
I saw the underwater scene early on. everything else trailed in afterwards. My friends khufu and loris and I sat at a coffee shop in Bushwick and wrote the treatment out together.

What are your hopes for your 22nd year of life?
AN

V
Can you say anything about being one of the first Korean American artists to be breaking into the space that you’re in?
AN
I’m blessed and able to do my thing because of the people before me who laid down the foundation.

V
Can you talk a bit about your experience at NYU and why you decided to take a gap year?
AN
I loved going to school in manhattan. The sushi at Kimmel Dining Hall is great. I decided to take a gap year because I didn’t want to take on student loans and I was already recording a shit ton. I convinced my dad with a powerpoint with cute fonts and pie charts that it was a good idea to leave school for a year.
Watch the video for “Space” below.

Carrie Symonds just appeared in public for the first time since...