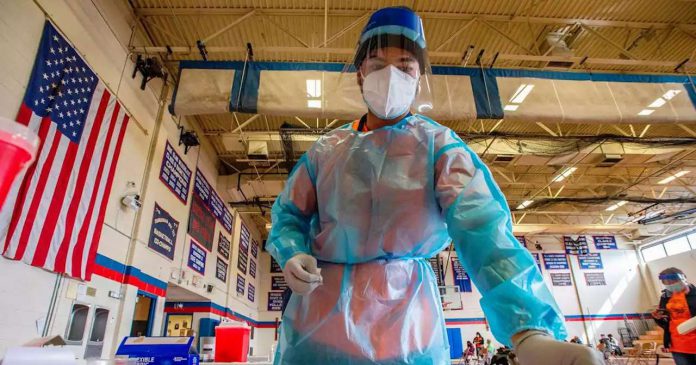 A new phase of the pandemic may be upon us, with states such as Michigan seeing a surge in cases attributed to a version of the coronavirus.

A new inflection point in the pandemic. Photo: Joseph Prezioso/AFP via Getty Images The highly contagious variant of the coronavirus first detected in the U.K. is now the dominant strain of the virus in the United States, according to the head of the Centers for Disease Control and Prevention.
“Based on our most recent estimates from CDC surveillance, the B.1.1.7 is now the most common lineage circulating throughout the United States,” Rochelle Walensky said Wednesday, using the scientific name for the variant. That means it surpassed all other variants in the country. “The virus has a hold on us, infecting people and putting them in harm’s way, and we need to remain vigilant.”
The variant was expected to become dominant by early April and lead to an increase in cases, though how much has been a hotly contested prediction. Research has suggested B.1.1.7 not only spreads more easily between people but is also likely associated with higher mortality than other variants.

The strain has become more prevalent among young adults in the U.S., which Walensky said has contributed to states battling a surge in new cases and hospitalizations. Michigan, for example, leads the nation in hospitalizations among younger, unvaccinated people, according to the latest CDC figures.
Since it was first discovered in London last December, the variant has spread to other parts of the globe. On Tuesday, CNN reported that the variant had now been identified in every U.S. state and has been spreading in the U.S. since October. There are currently 16,275 confirmed cases of the B.1.1.7 variant in the United States, according to the CDC, but the true figure is much higher given that the U.S. has relatively little genomic testing to sort out variants of the virus.

With Sanders Supporters Desolate and the Convention in Flux Can Joe...