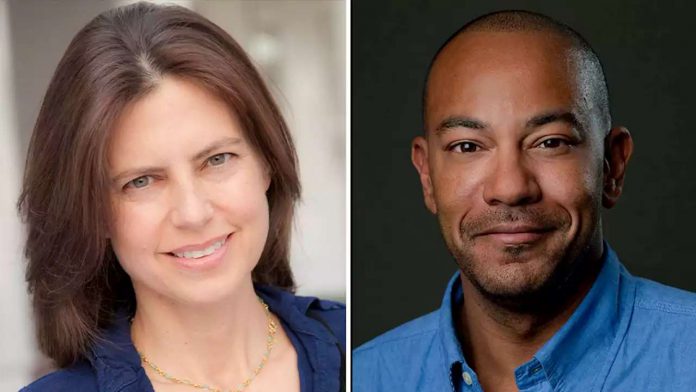 EXCLUSIVE: Prolific series producers Sarah Timberman and Carl Beverly have closed a long-term overall television deal with Lionsgate for their Timberman-Beverly Productions. The duo is joining the …

to high-end commercial series for broadcast and ad-supported cable like the long-running
Elementary
Justified
on FX.
Timberman and Beverly currently have several series stemming from their overall deals at three different studios over the past decade and a half, Sony Pictures TV, CBS Studios and ABC Signature. They include drama
SEAL Team
, currently in its fourth season on CBS; the upcoming Showtime drama series
The Man Who Fell to Earth,
based on the iconic 1976 film starring David Bowie, a collaboration with Alex Kurtzman’s Secret Hideout Productions and Jenny Lumet starring Chiwetel Ejiofor and Naomie Harris; the upcoming FX limited series adaptation of Taffy Brodesser-Akner’s acclaimed novel,
Fleishman is in Trouble,
with Susannah Grant’s Sage Lane Productions; and a reunion season of
Justified,
to be adapted from the Elmore Leonard novel,
City Primeval: High Noon in Detroit,
which is in fast-track development at FX.
“Sarah and Carl’s amazing track record of critically-acclaimed hit series speaks for itself,” said Lionsgate Television Group Chairman Kevin Beggs and Lionsgate Television Group President Sandra Stern. “They have proven themselves to be gifted and prolific storytellers across every major genre and for every kind of platform, streaming, broadcast and cable, with a record of accomplishment that few producers can match. We’re incredibly fortunate to add them to our family and look forward to the many high-end premium hit series that have become their signature.”
Lionsgate’s status as an independent is believed to have been a major factor in Timberman and Beverly’s decision to come to the studio.

In addition to having a sibling network it is the primary supplier for, Starz, Lionsgate TV also sells everywhere, with current series on three broadcast networks, Showtime as well as multiple shows on Apple+ and HBO Max.
Additionally, the pact marks a reunion for Timberman and Beverly with two top Lionsgate executives, Jon Feltheimer, CEO of Lionsgate Entertainment, and Stern. They all worked together at Columbia TriStar Television in the 1990s, then run by Feltheimer. Beverly started his career as Feltheimer’s assistant.
“We’re thrilled to be joining Jon, Kevin, Sandra, Scott, Jocelyn and the entire Lionsgate Television family,” Timberman and Beverly said. “In addition to enjoying long standing friendships and professional ties, we’re huge admirers of the provocative and ground breaking storytelling that Lionsgate has long championed, their strategically nimble approach to the fast evolving landscape of television, and their ability to work across a wide range of platforms. We can think of no better place to be as we embark on our company’s next chapter.”
Timberman-Beverly Productions is repped by Adam Berkowitz of Lenore Entertainment Group, Jeff Finkelstein of Del Shaw and Bruce Gellman of Hansen Jacobson. The company was launched in 2003 as 25C and renamed Timberman -Beverly Prods. in 2008.
Subscribe to
and keep your inbox happy.
Read More About:

Ryan Reynolds Says He and Blake Lively Will Always be ‘Unreservedly...

Things Are Not Going Well for Amy McGrath