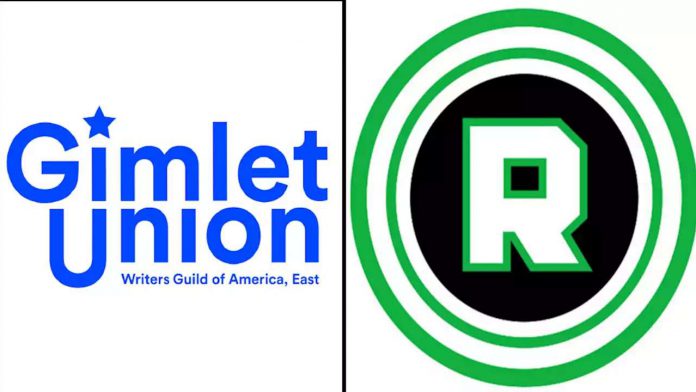 Writers and producers at Gimlet Media and The Ringer, which were two of the first podcast production companies to unionize with the WGA East, have ratified their first collective bargaining agreeme…

WGA East
, have ratified their first collective bargaining agreements.
The contracts, which the guild called “groundbreaking,” were unanimously ratified by the 48 members o the bargaining unit at Gimlet Media and by the 65 covered staffers at The Ringer. Both companies are owned by Spotify Inc.
The contracts “demonstrate that the people who make podcasts, from writers to producers to editors, bring enormous value to the major platforms for whom they create content,” said Lowell Peterson, the guild’s executive director. “Collective bargaining ensures creative professionals have a seat at the table to address issues like inclusion and equity, intellectual property concerns, and sustainability of careers.”
Related Story
Hollywood’s Unions Are Racking Up Huge Dues Losses During Pandemic Slowdown
In a statement, staffers on The Ringer’s bargaining committee said: “We began this process with the aim of improving working conditions and compensation at the company, especially for our lowest-paid members. We’re thrilled to have achieved that goal with this contract.”
Gimlet Media’s bargaining committee said: “Our union began as an effort to improve diversity, pay equity, and pathways to promotion at Gimlet. We are proud that this first contract includes provisions that takes steps forward on all of these issues. We also look forward to maintaining more open discussions with management to ensure that we continue to make progress on all these fronts, and more.”
Provisions of the new contracts include:
● Increases to salary minimums, with The Ringer establishing $57,000 plus overtime as an entry-level floor, and Gimlet Media beginning at $73,000 for Associate Producers.
● Establishment of new senior titles.
● Limitations on the use of contractors within bargaining unit positions. Contractors must either be offered a full-time job after 10 months, or the companies must inform them 30 days in advance that there will not be a position available for them.

● Minimum of 2% guaranteed annual increases.
● Minimum severance of 11 weeks for all employees, regardless of tenure.
● Spotify benefits, with no change in benefits for the duration of the contract.
● Editorial standards that guarantee that the company will not modify or fail to publish content based on the direction of advertisers, and that bargaining unit employees will not be required to work on advertising and branded content.
● Funding for Diversity Committees, with representatives from both management and the bargaining unit.
● Language guaranteeing that 50% of candidates for open unit positions who make it to the stage after the phone interview will be from traditionally under-represented groups (BIPOC, LGBTQ+, people with disabilities, military veterans).
● Elimination of post-employment non-compete agreements for all employees who make under $155,000, and removal of post-employment non-competes in individual agreements.
● Just cause and union security.
The guild also represents employees at Spotify-owned podcast production company Parcast, which is in negotiations with Spotify for their first collective bargaining agreement.
The WGA East represents nearly 7,000 writers in film, television, broadcast and digital news and podcasts. The guild also represents staffs at WINS-AM, ABC News, Bustle Digital Group, CBS News, CBSN, Chalkbeat, Committee to Protect Journalists, Entercom, Fast Company, WNYW-TV, FT Specialist, Future Plc, Gizmodo Media Group, Hearst Magazines, HuffPost, The Intercept, Jewish Currents, MTV News, NowThis, Onion Inc., Refinery29, Salon, Slate, Talking Points Memo, Thirteen Productions, Thrillist, Vice, Vox Media and WBBM-TV.
Subscribe to
and keep your inbox happy.
Read More About:

The Get-Organized Gear That Could Change Your Loved One’s Life or...