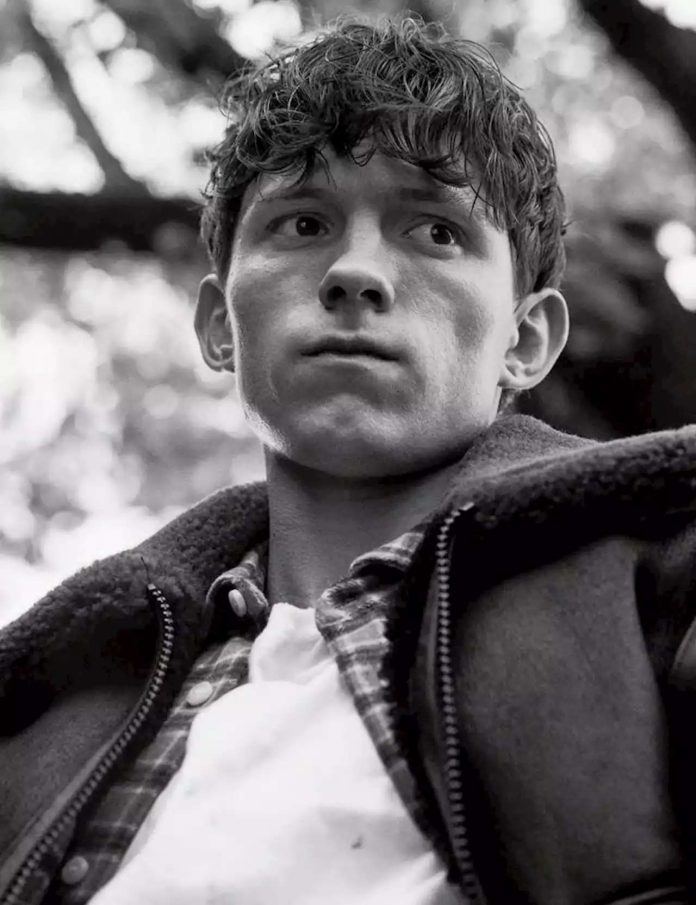 The latest addition to the Marvel universe brings a brainy charm to the world’s most beloved web-slinging superhero.

In the lead up to the expectedly seismic release of
Spider-Man: Homecoming
in July, and with it the sky-rocketing of his star power, Holland and his friend and
Spider-Man
co-star, the actress and singer Zendaya, went head-to-head on an episode of the curious celebrity game show
Lip Sync Battle
that aired on MTV ahead of this year’s Movie & TV Awards. Holland, with a full drag-and-dance routine rendition of Rihanna’s “Umbrella,” won the day, and became a viral sensation for his efforts. In May, they hopped on the phone for a lower-stakes sort of back and forth.
TOM HOLLAND: Zendaya, how are you doing?
ZENDAYA: I’m good, man. This is my first time interviewing you. It’s kind of weird. I’m going to keep it real simple. [
both laugh
] What did you want to be when you were a kid?
HOLLAND: I didn’t really know what I wanted to be. My mom thought I could dance because I used to dance to this Janet Jackson song she’d play when I was a baby. Then she would take me to a Saturday dance school. I used to go every week and got spotted by a scout, who suggested I audition for the role of Billy in
Billy Elliot the Musical
. When I first started auditioning, I was too small and I couldn’t dance. [
Zendaya laughs
] I went to an all-boys school, where I played rugby, so ballet wasn’t the coolest thing to do.
ZENDAYA: Kids are kind of mean. Was that ever a thing?
HOLLAND: I think it toughened me up. I loved doing ballet. I trained for two years. I auditioned every six months for
Billy Elliot
and got slightly bigger every time I went, and eventually I got the job. I’m very happy I had that training. It’s been so valuable to my career, and I’ve used it on almost everything I’ve done since.
ZENDAYA: It’s probably the reason you beat me on
Lip Sync Battle
. I’m just throwing that out there.
HOLLAND: That was raw talent.
ZENDAYA: What came after
Billy Elliot
?
HOLLAND: My parents decided that it was time for me to go back to school. And after being at school for only six weeks, I was whisked off to Spain to shoot in a water tank with Naomi Watts for a film called
The Impossible
ZENDAYA: Your mom is a photographer, right?
HOLLAND: Yes.
HOLLAND: He is a stand-up comedian and an author.
ZENDAYA: Do you think that has had anything to do with your creativity?
HOLLAND: Definitely. I come from very creative parents. It’s nice to have a dad who’s been in the industry for probably over 30 years because he knows all the dos and don’ts and the ins and outs and stuff.
ZENDAYA: So now we move from
Billy Elliot
to a big movie. Did you want to be in the industry more and more? Because when I got my first job, I just wanted it even more.
HOLLAND: That happened for me the more I auditioned for
Spider-Man
. The closer and closer I got, the more I wanted it. I must have been about 18 when I started auditioning.
ZENDAYA: How long was that process?
HOLLAND: That process was five months. I did eight auditions. I did five self-tapes, and then a screen test with Robert Downey Jr. and a screen test with Chris Evans. In the screen test with Robert Downey Jr., they brought me into the room and I met him. I was so nervous. In my head, I thought, “Wow, you look really weird in person. You don’t look like you do onscreen.” I found out later that I met his stand-in. I basically got my nerves out on his stand-in and then met him. Then my screen test with Chris Evans was a movement test. I was like, “Shall I do a backflip?” And all the Sony guys were like, “Can you
do
a backflip?” “Fuck, yeah. I’ve been sending you videos for the last five months of me doing a backflip. How do you not know this?”
ZENDAYA: Was that the most stressful period of your life?
HOLLAND: It was stressful because the closer and closer I got, the more I could see my future changing.

ZENDAYA: And you wanted it.
HOLLAND: The thing that killed me was the waiting. Even after my self-tapes, they would call me up and be like, “We’re going to let you know tomorrow.” Six auditions later, still nothing. On my last audition, they said, “You need to stay in Atlanta because we’ll tell you tomorrow.” So I stayed in Atlanta for about a week because my cousin lives there. With each passing day, there was no phone call. I flew back to London. Five weeks passed. I kept checking my phone every 20 minutes, trying to find something. Eventually, one day I was sitting on my bed with my dog just scrolling through Instagram, and there it was. It said, “Go to our website and check out who the new Spider-Man is.” And I did. It said my name. I went crazy. My poor dog had a fit. I ran downstairs, told my family. My brother, Harry, was like, “No, dude. Sony’s account has been hacked. They’d let you know. They’d call you.” Which is so Harry, by the way. He’s so pessimistic about everything. But Sony
had
gotten hacked not long before. Then [president of Marvel Studios, and producer on the film] Kevin Feige rang me up, telling me, “I’ve got great news. You’re going to be Spider-Man.” I’m like, “I know, Kevin. It’s on Instagram. I’m 19. Did you really think I wasn’t going to find it?”
ZENDAYA: Everybody asks me this question: What do you see for yourself? What do you want? Obviously, you’ve done other types of roles that are very different from Peter Parker. Do you want to act forever?
HOLLAND: The 20-year goal is to be a film director. The 15-year goal is to win an Oscar. The five-year goal is to just keep enjoying myself. I really am having the time of my life. But as far as my future goes, I want to stretch myself as an actor in a way that Jake Gyllenhaal, Leonardo DiCaprio, and Meryl Streep do. I don’t want to be stuck to one character. I think that’s what can happen when you take on a superhero movie. So every conversation I have with my agent is, “What have you got for me? What’s next? Who can I play?”
ZENDAYA: It’s cool you want to be a director. When I’m on set with you, you have a very director-like mind. You’re always coming up with ideas and being as involved as possible.
HOLLAND: I like directing because I like working with actors so much. I’d like to be a director who gives my actors complete freedom while collaborating with them to find performances.
ZENDAYA: We never had this in-depth of a conversation when we were on set.
HOLLAND: Ever.
ZENDAYA: Our conversations are …
HOLLAND: Childish.
ZENDAYA: What do you consider your biggest flaw and your greatest strength? That’s a very mature thing to know.
HOLLAND: My biggest flaw is probably my attention span or lack thereof. And while it might seem contradictory, my biggest strength is my work ethic. Like, on
Spider-Man
, I would just try to outwork everyone. That said, if you ask me to read a book, I just can’t get my brain to focus on it.
ZENDAYA: I feel like I know the answer to this, but what role in an iconic movie do you wish that you could have played?
HOLLAND: James Bond. Or maybe I’ll do Batman.
ZENDAYA: It would be a little unfair if you got to play Spider-Man, James Bond, and Batman, Tom.
HOLLAND: It would be so unfair. But life isn’t fair, Zendaya.
ZENDAYA IS A LOS ANGELES–BASED ACTRESS AND SINGER. SHE APPEARS IN
SPIDER-MAN: HOMECOMING
, OUT IN JULY, AND WILL BE SEEN IN
THE GREATEST SHOWMAN

32 Snacks on Amazon That Will Help You Kick Your Sugar...

Once Upon a Time In Hollywood’ Costume and Location Tour With...

Hundreds of Elephants Are Dying and No One Knows Why