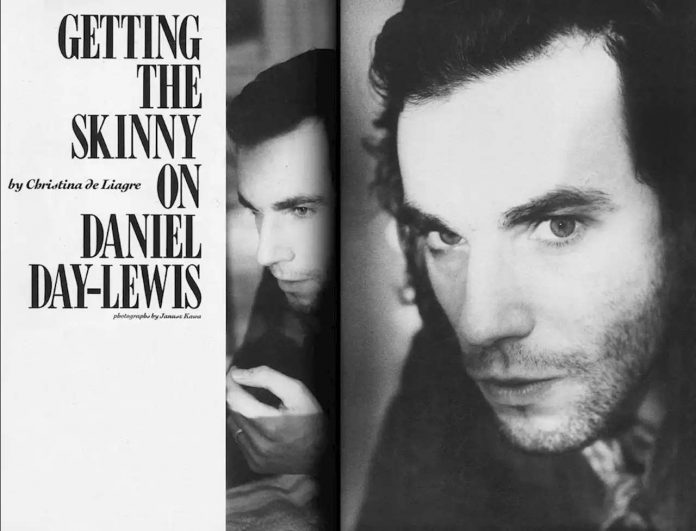 On Tuesday Daniel Day-Lewis announced that he will retire from acting after the completion and release of Phantom Thread, a drama directed by Paul Thomas Anderson about the 1950s London fashion scene.

. Does that make the whole experience of the movie even more emotionally charged?
DAY-LEWIS: Does what make it even more emotionally charged? The “alleged” relationship? [
laughs
] Well, why would something that’s allegedly true make it more difficult? What are you trying to say? If I have avoided the question up till now, is it likely that I’ll start speaking about it at this moment?
DE LIAGRE: I’m not asking you to speak about it, but it would seem that it was a highly charged production from many points of view.
DAY-LEWIS: I can’t account for what people say. They allege what they want to allege. I haven’t contributed to that and I don’t intend to. They’ll just have to draw their own conclusions…
DE LIAGRE: Have you kept up with friends from school? In your letter to director Stephen Frears approaching him to get the part of Johnny [in
My Beautiful Laundrette
] you wrote, “I know you think I come from a public-school background, but I’ve got very nasty friends.” Who are they?
DAY-LEWIS: Well, if ever you’re in London I’ll take you to a football match in Newcross; you can watch Millwall playing, and then you’ll find out. They’re actually doing rather well as footballers now, but in the past they had a reputation as the most badly behaved supporters in the country, probably in the world. They’re very naughty boys.
DE LIAGRE: And are they still part of your entourage?
DAY-LEWIS: [
laughs
] Well, I was part of their entourage. I was just sort of tagging along! I was a shrimp.
DE LIAGRE: How do you feel about Stephen Frears describing your letter as “vile and disgusting”? Was it?
DAY-LEWIS: He’s embellished on this story. When he was first trying to do
Prick Up Your Ears
years ago, I went to meet him and I suppose I was fairly bizarrely dressed. But according to him now, I went into the room and he said, “Why are you talking in a working-class accent? You’re the poet laureate’s son.” He never said that to me; he had no reason to. I wasn’t talking in a working-class accent. He just exaggerates. The letter was fairly vile, but I only wrote it to him because I knew he would understand it. He’s not easily intimidated and it wasn’t intended to intimidate him; it was just making a point and he took the point—he gave me the job! He didn’t give it to me because I threatened—
DE LIAGRE:
to break his leg, was that it?
DAY-LEWIS: Uh, both of them. He gave me the job because he understood my enthusiasm.
DE LIAGRE: You have said that one of the burdens you carry is the fear that people are going to find you out one day: “The thing about acting is that you always believe you’re a fraud.”
DAY-LEWIS: The truth is that the work you do is, at best, a rather wonderful, intricate fabrication of an untruth. The greater your powers of self-delusion, the greater will be the apparent efficacy of this untruth. My life is devoted to self-delusion—and I have a great capacity for that—but it’s the thing that gives me the most pleasure, so I can’t complain about it.
DE LIAGRE: Your first film was
Sunday, Bloody Sunday
[1971], when you were 12 years old. Is that correct?
DAY-LEWIS: Well, not entirely. I was hired as a professional footballer at that time. I was paid two pounds a day to play football in the background in Greenwich Park. Now there happened to be a camera at some distance from us, and John Schlesinger happened to be behind that camera, but as far as I was concerned I was making my debut as a professional footballer. That’s what I was hired for. Then he asked to see a few local boys and chose three particularly unpleasant-looking ones. I was one of these. We were equipped with broken milk bottles and told to wreck a row of rather smart parked cars. It doesn’t sound like film work to me. That sounds like money for old rope. [
laughs
]
DE LIAGRE: I heard something about how you once wanted to be a carpenter.
DAY-LEWIS: A cabinetmaker. It’s true. I made furniture when I was at a school which had facilities for that. It gradually became more and more important to me until I reached a point where it threatened my perception of the theater, a perception which had been unshakable from the age of 12 onwards.

Suddenly, weighing the two things, the theater seemed to be an occupation to be deeply mistrusted, as opposed to the honest, tranquil world of craftsmanship. It has to do with the fact that I met a number of master craftsmen during that time and without exception they seemed to have found the secret as far as I was concerned. They were peaceful, beautiful men and I suspected that as long as I worked in the theater I would never find the secret.
DE LIAGRE: And you haven’t?
DAY-LEWIS: No, of course not; that’s why I still doing it.
DE LIAGRE: Your mother was an actress.
DAY-LEWIS: She is an actress. It was harder for her when we were growing up and she did less work.
DE LIAGRE: You have an older sister, Tamasin—
DAY-LEWIS:
and two half brothers, Sean and Nicholas.
DE LIAGRE: What was it like being the son of poet laureate?
DAY-LEWIS: We were tremendously proud of work that he did. He died in 1972, when I was 15—before I’d had a chance discuss anything that was important to him—that’s something to be regretted. He my father. There’s nothing else to say.
DE LIAGRE: Do you have a favorite line or favorite poem of his?
DAY-LEWIS: There are a number of his which I particularly like. I like the the poem he wrote for me—for obvious reasons called “The Newborn.” He also wrote a poem for my brother Sean, called “Walking Away,” which I think is beautiful. There is a bit at the end which I think is particularly good: “I’ve had worse partings, but none so / Gnaws at my mind still. Perhaps it is roughly / Saying what God alone could perfectly show— / How selfhood begins with a walking away, / And love is proved in the letting go. [
Both poems are in
The Gate
, Jonathan Cape, 1962—ed.
] I think that’s wonderful. He wrote it for my brother, his eldest son, when he took to school for the first time.
DE LIAGRE: Your father was quite old when you were born.
DAY-LEWIS: Yes, he was 53.
DE LIAGRE: You said recently that you weren’t ready to get married.
DAY-LEWIS: No, I’m not ready… No.
DE LIAGRE: I only brought that up in terms of your father having been 53 when you were born.
DAY-LEWIS: Oh, you think I’m heading dangerously towards the time when I’ll be… [
laughs
] I wouldn’t like to be that old when I have children. While he was a very affectionate father—he was—it was difficult. His age certainly created a distance which I wouldn’t choose for my own children. But then his work created a distance as well. He was a man who needed a great deal of solitude and privacy for his work, something that we respected, but one can say that that was as much a reason as his age for that distance. One can’t dissociate the two things. I would like to have children while I’ve still got the energy. But then I have the feeling that when I have children I’ll stop performing in the same way, because you don’t really need to perform if you have children.
DE LIAGRE: Why is that?
DAY-LEWIS: Well, they’re naturals; they’re the best performers. I’ll become a director when I’ve got children and just sit and watch. [
laughs
]
DE LIAGRE: After having done these films is it important to you to get back to the stage?
DAY-LEWIS: The theater is a need for me. It’s a terrible attraction, something I’m compelled to do. And one derives a form of nourishment from the theater which you can never get from films. Making films weakens you in some way. With the theater, the work itself is a regenerative process. Now, when you make a film that costs $15 million, there’s a part of you which can’t help thinking, “Well, couldn’t this money be better spent?” I continue to make films because it still has a fascination for me, but it’s not easy to justify…
DE LIAGRE: Do you have certain heroes or role models?
DAY-LEWIS: No role models. Many heroes. I have an
enormous
capacity for hero worship. Right down to the Millwall terraces. Spencer Tracy. Montgomery Clift. Brando—how can you not worship Brando? Guinness. Richardson. Paul Scofield—
DE LIAGRE: The heroes are all men!
DAY-LEWIS: You didn’t ask me about heroines, you asked me about heroes. [
laughs

How to Wear Neon Eyeliner the Biggest Beauty Trend of Summer...