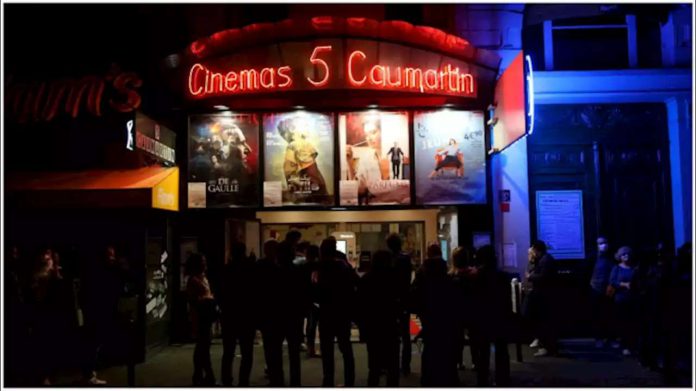 France’s culture minister Roselyne Bachelot has outlined in broad strokes the strategy for reopening cultural venues, including movie theaters, on May 19. For one thing, there won’t be …

reopening cultural venues, including movie theaters, on May 19
. For one thing, there won’t be any sales of popcorn or other food and beverage inside cinemas during the first three weeks of reopening.
Addressing the National Assembly on May 3, Bachelot said eating wouldn’t be allowed inside theaters because restaurants and bars would not either be permitted to serve customers indoors until June 9. Only outdoor areas outside cafes and restaurants will reopen on May 19.
“There’s no reason why there should be double standards in terms of restrictions imposed on ‘common’ restaurants and restrictions that would apply to restaurants tied to a cultural event (or venue),” Bachelot told the National Assembly. The underlying idea is to have everyone wear a mask indoors and have no reason to take it out.
Bachelot also pointed that the government was aware of the economic impact that seating limitations – starting at 35% on May 19 to reach 65% on June 9 and 100% on June 30 — will have on cultural venues and is currently discussing with the ministry of economy and finance to come up with funds to compensate admissions in the early stages of the reopening of cinemas, musical shows and live spectacles. All of France’s cultural venues have been shut down since Oct.

30.
Exhibitors and distributors have also been hoping that moviegoers could attend evening screenings ending after the 9 p.m. curfew (to be maintained until June 9) with a proof of ticket purchase, but Bachelot didn’t address the issue. In theory, a 9 pm curfew means that theaters should be able to schedule one evening screening, unless the movies run over two hours. It will be difficult, however, for people to get back home by that time after coming out of a screening.
Bachelot acknowledged that the French industry was “facing a wall of films” in the months to come and said the backlog included about 150 French movies and 250 foreign films. Bachelot said it was encouraging to see that the anti-trust board has recently given a positive feedback about the initiative discussed by French distribution banners to cooperate on the schedule of their respective releases. The culture minister said the National Film Board (CNC) had been tapped to draft an agreement that distributors will be able to take part in. “I trust the responsibility of all, of distributors, to (get) this agreement concluded promptly to benefit each and everyone,” said Bachelot. So far, none of the bigger distribution players –

You Guys SPOILER Really Really Wants to Be the Next Bachelor