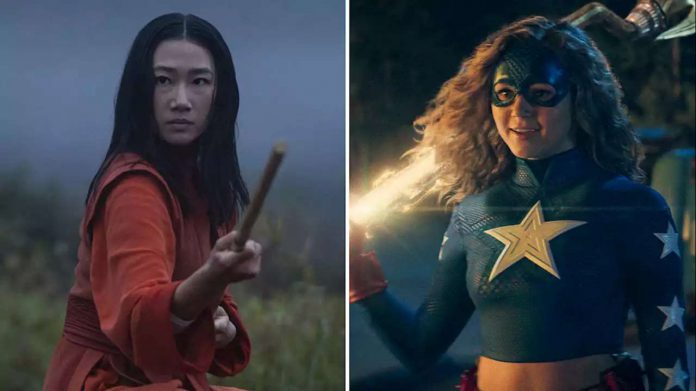 The CW
.
“We are beyond proud to continue to share the stories of Nicky Shen and Courtney Whitmore, two strong, powerful young women at the center of this new generation of hit shows for The CW in ‘Kung Fu’ and ‘DC’s Stargirl,’” said Mark Pedowitz, chairman and CEO of The CW Network. “While each boasts remarkable talent on both sides of the camera, ‘Kung Fu’ and ‘DC’S Stargirl’ have not only treated fans to some visually stunning action and high-flying heroics, but they also both strike very powerful emotional chords as they delve into the family dynamics and personal relationships at their core, and we are so excited to see what happens next.”
The renewal announcement for “Kung Fu” comes just under a month after the series premiered. It has enjoyed strong ratings on the network since then, making the renewal all but a certainty. It was also the only scripted CW series this season still waiting on word of a renewal going into upfronts.
In the reboot of the 1970s series, a quarter-life crisis causes a young Chinese American woman, Nicky Shen (Olivia Liang), to drop out of college and go on a life-changing journey to an isolated monastery in China. But when she returns to San Francisco, she finds her hometown is overrun with crime and corruption and her own parents Jin (Tzi Ma) and Mei-Li (Kheng Hua Tan) are at the mercy of a powerful Triad. Nicky will rely on her tech-savvy sister Althea (Shannon Dang) and Althea’s fiancé Dennis (Tony Chung), pre-med brother Ryan (Jon Prasida), Assistant District Attorney and ex-boyfriend Evan (Gavin Stenhouse), and new love interest Henry (Eddie Liu) as well as her martial arts skills and Shaolin values to protect her community and bring criminals to justice, all while searching for the ruthless assassin who killed her Shaolin mentor Pei-Ling (Vanessa Kai) and is now targeting her.

Christina M. Kim wrote the pilot episode and serves as executive producer and co-showrunner with Robert Berens. Greg Berlanti, Sarah Schechter, Martin Gero and David Madden also serve as executive producers. Hanelle Culpepper directed and co-executive produced the pilot episode. The series is produced by Berlanti Productions and Quinn’s House in association with Warner Bros. Television and is inspired by the original series created by Ed Spielman.
“Stargirl” follows high school sophomore Courtney Whitmore (Brec Bassinger) and her stepfather Pat Dugan (Luke Wilson) as she leads an unlikely group of young heroes to take on the legacy of DC’s very first superhero team, the Justice Society of America. The series focuses on the character that started creator Geoff Johns’ career as a comic book writer when he created her in 1999, inspired by his late sister who was killed in a 1996 plane crash. The series also stars Amy Smart, Yvette Monreal, Anjelika Washington, Cameron Gellman, Trae Romano, Hunter Sansone, Meg DeLacy, and Nick Tarabay.
Johns is the showrunner and executive produces with Berlanti and Schechter. The series is produced by Berlanti Productions and Mad Ghost Productions in association with Warner Bros. Television.
optional screen reader