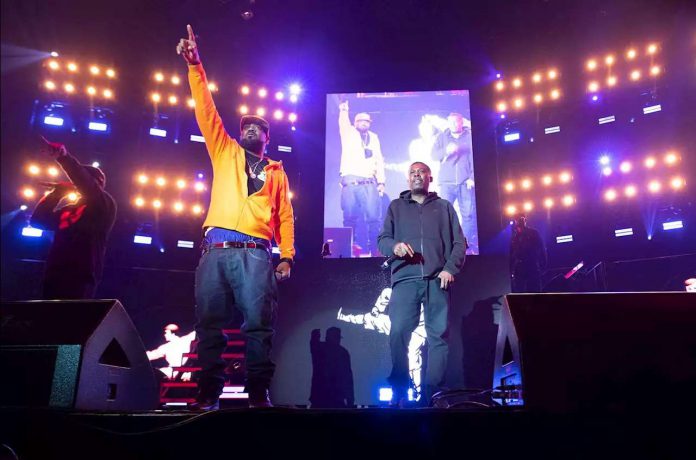 Roberto Ricciuti/Redferns
Ghostface Killah and GZA of Wu-Tang Clan perform on May 11, 2019.
A Georgia man has been sentenced to more than eight years in federal prison for using stolen credit cards to live large in hotels and limousines while claiming to have ties to the hip hop group
Wu-Tang Clan
. Walker Washington of Augusta was sentenced to 100 months in prison after pleading guilty to conspiracy to commit wire fraud, David H. Estes, acting U.S. attorney for the Southern District of Georgia, said in a news release.
U.S. District Judge Dudley H. Bowen also ordered Washington, 53, to pay about $300,000 to 19 businesses defrauded in the scheme, according to the release. He must serve three years of supervised release after his prison term is completed. There is no parole in the federal system. Washington’s co-defendant, Aaron Barnes-Burpo, 29, of Crestview, Florida, was previously sentenced to seven years after pleading guilty to the same charge and also must pay $300,000 in restitution to the businesses.

36 Chambers? Try 400 Pounds, Wu-Tang Clan Announce Massive Photo Book
“These two flim-flam artists and their phony entourage lived large for several weeks by scamming hospitality providers,” Estes said. “We commend the skeptical hotel clerk who saw through the scam and alerted law enforcement, bringing this scheme to a halt.” Barnes-Burpo and Washington admitted that they falsely claimed to be affiliated with the Roc Nation production company and the Wu-Tang Clan and used fraudulent and stolen credit cards to rent limousines, defraud hotels, caterers and production studios in multiple cities as early as September 2019, prosecutors said.
Staff at the Fairfield Inn and Suites in Augusta became suspicious on Nov. 21, 2019, and notified the FBI and the Richmond County Sheriff’s Office, the release said. “These two scammers will have plenty of time to figure out if their few weeks of unearned fame was worth several years in prison,” said Chris Hacker, special agent in charge of FBI Atlanta.
By

They’ve got the beat! Watch the first trailer for the ‘Valley...

My Sisters and I Are Also Zodiac Sisters Which Is Why...

Bella Hadid Called Out Instagram for Deleting a Snap of Her...