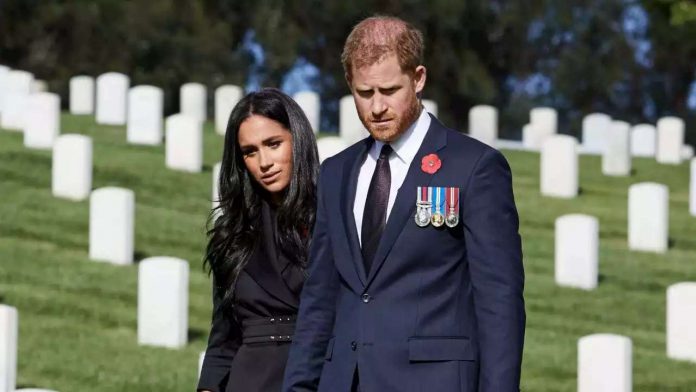 Prince Harry recalls his wife’s ‘heartbreaking’ moment before her interview with Oprah aired.

, Harry revealed that Meghan broke down crying ahead of the interview airing due to the”combined effort of the firm and the media to smear her.” Ahead of the interview,
The Times
faced a bully complaint at Kensington Palace
, claiming she”drove two personal assistants out of the household and was undermining the confidence of a third staff member.” A spokesperson for Meghan and Harry denied the allegation, calling it a”calculated smear campaign.”
“I was woken up in the middle of the night to her crying in her pillow because she doesn’t want to wake me up, because I’m already carrying too much,” Harry shared in the docuseries with Oprah.”That’s heartbreaking. I held her, we talked, she cried, and she cried, and she cried.”
Harry also talked about why they decided to do the interview in the first place.
“[It] was about being real, being authentic and hopefully sharing an experience that we know is incredibly relatable to a lot of people around the world despite our unique privileged position,” he explained.
Harry was
candid about his relationship with Meghan
in the docuseries, including sharing that his”biggest regret” was”not making more of a stance earlier on in my relationship with my wife and not calling out the racism when I did.”
“History was repeating itself. My mother was chased to her death while she was in a relationship with someone that wasn’t white and now look what’s happened,” Harry said, recalling his mother, Princess Diana’s, romance with Egyptian film producer and heir Dodi Fayed, who was also killed in the fatal 1997 car accident.

You want to talk about history repeating itself, they’re not going to stop until she dies. It’s incredibly triggering to potentially lose another woman in my life.”
He also shared how he reacted to Meghan telling him at one point during their relationship that she was
experiencing suicidal thoughts
, which she first revealed during her sit-down with Oprah.
“We had a quick cuddle and then we had to get changed, had to jump in a convoy with a police escort and drive to the Royal Albert Hall for a charity event and then step out to a wall of cameras and pretend as though everything’s OK,” he recalled.”There wasn’t an option to say, ‘You know what, tonight we’re not going to go.’ Because imagine the stories that come from that.”
Harry said that Meghan’s love for him kept her from acting on her suicidal thoughts.
“She was completely sane, yet in the quiet of night, these thoughts woke her up,” he shared.”The thing that stopped her from seeing it through was how unfair it would be to me after everything that happened to my mum and to now be put in the position of losing another woman in my life with a baby inside of her, our baby.”
RELATED CONTENT:
This video is unavailable because we were unable to load a message from our sponsors.
If you are using ad-blocking software, please disable it and reload the page.

Dwayne Johnson Will Run for President If It’s ‘What the People...