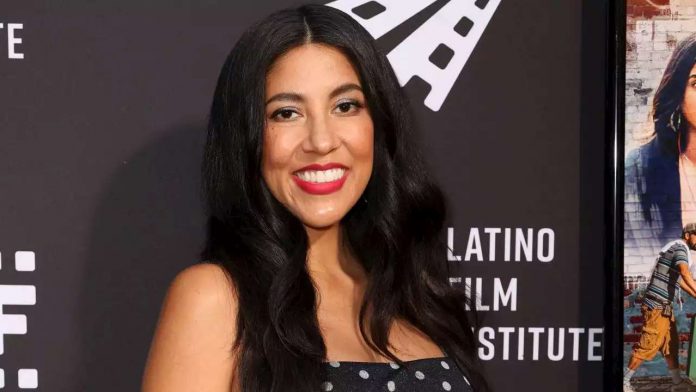 The actress showed off her baby bump at the LALIFF screening of ‘In The Heights’ on Friday.

In the Heights
in Hollywood on Friday. Beatriz, 40, spoke with ET’s Deidre Behar about how she feels about being a first-time mom, and what she’s most looking forward to when her little one arrives.
“I feel weird,” she said with a laugh.”I feel excited, grateful, sort of like a weird science experiment, like I’m not sure what’s going to happen next. Am I going to burp in the middle of this interview? I don’t know?! I’m not in control. I’m just along for the ride.”
Kevin Winter/Getty Images
Beatriz was glowing, wearing a baby bump-hugging black with polka dots dress and black platform for the red carpet event. She couldn’t help but smile while talking about welcoming her baby into the world and what she would want to teach them.
“[Director] Jon [m.] Chu actually said something really beautiful that I think about a lot, which is, I think he was speaking about being the steward of the story and helping bring it to life,” she explained, before touching on motherhood.”But I really feel like as a parent I think my job is to be the steward of this little human soul. It’s not my job to make them be this or that, or push them to fit anything. It’s literally just to try to get them to see that the world is full of beautiful things and that they’re going to have a big part of making it a better place if they want to do that.”
Chu welcomed his son, Jonathan, while filming
In The Heights
and gave his child the middle name”Heights.” When asked if she would give her baby a similar name, Beatriz said that she’s already gotten a slew of name suggestions from her cast.
“I jokingly in our cast group text was like, ‘I’m taking submissions. Feel free to give me your name ideas.’ Everyone started coming at me hard,” she said, trying to recall a funny name her co-star Daphne Rubin-Vega said.”We’ll see. We don’t know what the sex is. We’re just sort of waiting to see who shows up.”
Axelle/Bauer-Griffin/FilmMagic
couldn’t be happier
to have her character represent the LGBTQ+ community.

America Was Built by John Lewises ’ Says Barack Obama in...