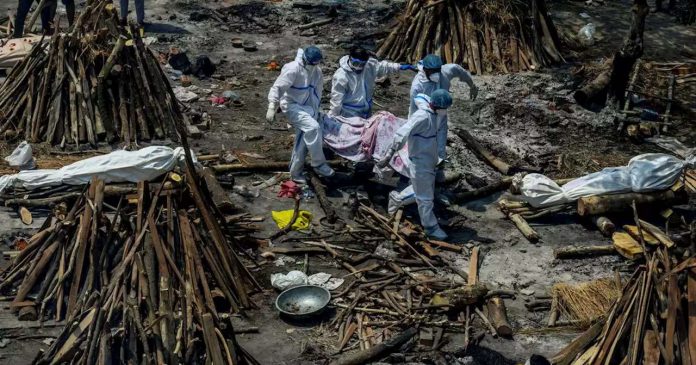 As the global north vaccinates, the rest of the world is in a grimly familiar place.

Bodies at a mass-cremation sit​e in New Delhi in April​. Photo: ATUL LOKE/The New York Times/Redux On the first day of June, Peru formally updated its COVID-19 death toll, nearly tripling a previous estimate and making the country not just the place in the world with the longest and strictest lockdown but also the one with the most lethal pandemic: 180,000 dead in a population of about 33 million. This is the equivalent of almost 2 million American deaths, and it has happened despite Peru’s closed borders, the shuttering of all nonessential businesses, and lockdowns enforced by the military in which citizens were allowed out of their homes only on alternating days of the week. Mask-wearing and driving without permission were policed, too. On Sundays last spring, no one was allowed out at all. A year later, the government abruptly added more than 100,000 names to a future coronavirus memorial.
Invisible deaths have been a morally disorienting feature of the pandemic from its beginning. In Peru, the dramatic revision was the result of incorporating estimates of “excess mortality” — fatalities beyond the expected level in a normal year. Excess deaths are not uniformly the result of COVID infection, and skeptics have argued they reflect the brutality of lockdowns more than the disease itself, but in several countries where they have been studied closely, it has been estimated that three-quarters or more were undiagnosed COVID cases. Data collection has been a bigger problem in poorer parts of the world than in richer ones, in general, but even in the U.S., where most experts agree that, after the initial spring surge, testing has been relatively robust, we may be undercounting coronavirus deaths by 100,000 or more. One recent estimate suggested we are missing as many as 300,000 American deaths.
If you are quickly doing that math in your head, what is the baseline you are adding to? The correct answer is 600,000, but the official figures long ago grew numbing for even the most informed. Some of those who could afford to follow the pandemic from their homes and their phones found their way to believing the disease was only as bad as the flu; others were so preoccupied by the failures of pandemic leadership they couldn’t see beyond the country’s borders to the experiences of nations elsewhere, many of them just as bad or worse. In India, the true death toll of the recent wave was almost certainly at least twice the official count, a recent New York Times investigation found, and possibly five times as high — enough to bring the country, once considered a pandemic success story, into line with the devastating level of Europe. There was some chance, the Times suggested, that the true Indian figure was ten times as high. Globally, the Economist recently calculated, the true total is likely between 7 million and 13 million dead — at least twice as bad as official figures and possibly as much as four times worse. Whatever your mental model of the lethality of the pandemic, you can probably safely double it and still find yourself underestimating by half.
Revisions of this kind suggest that the full scale of the brutality will soon come into view, as our statistics accommodate deaths once unseen or unacknowledged. But for Americans now breathing sighs of relief, celebrating their own vaccinations and watching national trajectories decline, the opposite is just as likely: They will turn more and more away from a pandemic that is now concentrated abroad, treating deaths in the global south as invisible. This is both understandable and grotesque, especially because, as Zeynep Tufekci has recently suggested, the deadliest phase of the pandemic may still lie ahead of us, and “it’s now entirely possible that most COVID deaths could occur after there are enough vaccines to protect those most at risk globally.

Tufekci’s essay was published in the Times the same week the newspaper discontinued the print section it had devoted to international coverage of the virus since April 2020. The following Wednesday, Brazil had its second-highest day of reported cases of the entire pandemic. On June 3, the World Health Organization warned of a third wave across Africa, where test positivity was rising in at least 14 countries, and where only 31 million, in a total population of 1.3 billion, had received even a single vaccine dose. Alarm about the Indian surge has subsided here without being replaced by concern about COVID spread elsewhere in the subcontinent. Over the past month, the infection rate in Nepal has been higher than in India; in the Maldives, it was often ten times as high.
For much of the past year, the crisis was concentrated in the world’s richest places, a sort of pandemic reversal of fortune that gave those privileged to live in “advanced economies” the unusual experience of social distress they imagined only occurred in developing parts of the world. Indeed, a widespread sense of superiority to pandemic disease was partly what produced, across the West, a fatal complacency last spring. But while it was possible then, in the depths of our own COVID struggle, to believe that the suffering of the global north might yield some sense of common humanity and vulnerability with the rest of the planet, the arrival of vaccines has tightened our circle of empathy. The pandemic may well be “over,” or close to it, from the perspective of those vaccinated in the U.S. or the U.K. But entirely turning the page on the past year amounts to a return to that unfortunate status quo ante, defined by an acceptance of even an intensified global health inequality. This is the coronavirus’s colonial period, in which the world’s thriving rich regard the dying of its poor with a smug indifference, when they even bother to contemplate it. Perhaps they even take a perverse kind of comfort from it. Thank God we’re not India, plenty of Americans found themselves muttering last month, many of them, armed with vaccine passports, planning summer trips abroad to countries where the timelines to community protection can stretch into 2023. Thank God for the vaccines. That we were India, not that long ago, and would be still, or worse, were it not for those vaccines, seemed to produce something less like national humility than a restored, entitled pride.
On June 3, following months of pleading by progressive advocates, Joe Biden announced that the U.S. would donate 25 million “spare” vaccines to countries in need, promising another 55 million to follow. There are more than a billion unvaccinated Indians. Globally, about 5 billion adults are yet to be vaccinated. Last month, the administration endorsed a WTO plan to waive intellectual-property rights on vaccines to more easily allow production in countries in need — but a month later, that plan is still being debated, indeed contested, by the E.U., and of course the legal right to produce is not the same as the industrial capacity needed to do so. In the U.S., with our first-class biotech, we had the IP by January 13, 2020, and only rolled out the vaccine to the public in December. Even when you have the resources, scaling up is hard. Not that it’s even so much money that’s required: According to a new study by the Rockefeller Foundation, vaccinating half of the world’s poorest 92 countries would cost only $9.3 billion; failing to deliver vaccines to them, the International Chamber of Commerce has calculated, could cost the global economy more than $9 trillion — a thousandfold payoff. Even a cynic or profiteer should see that the rich could get even richer through all this if we could only be bothered to care.

This Is The Correct Order to Apply Your Skincare Products