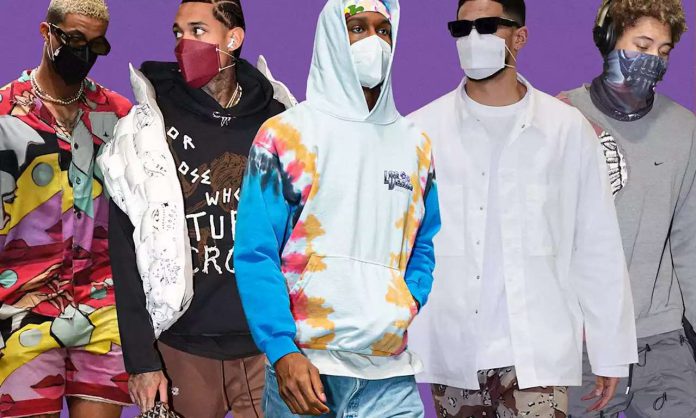 The latest crop of NBA stars is more fashionable than their predecessors because their style is more authentic and personal than before.

Fabian Gorsler
Getty Images / Carlos Goldman / Adam Pantozzi / Zach Beeker / Noah Graham / Kent Smith
The relationship between athletes and fashion has always been a tight-rope walk, where one side of the abyss is clichéd, gaudy logomania and the other side is straight up anti-fashion sportswear.
There haven’t been many professional athletes that have been able to walk the tightrope between the two extremes. Now, however, the next-gen of NBA superstars has turned that tightrope into more of a suspension bridge, with enough space to experiment authentically with their personal style, without having to worry about falling off.
In short: the new-age NBA players are comfortably more stylish than their predecessors. Their looks don’t give off the try-hard vibe that older professional athletes have sometimes inadvertently radiated. The inauthenticity that fueled
our problem with the NBA’s red carpet
in the past is evaporating and being replaced by confident, on-point fits.
It’s a trend that we’ve noticed with athletes in other sports over the past year or two, too. Football players in Europe were once a stereotype — their style was a meme, and rightly so. Skinny jeans, gaudy luxury brand logo T-shirt, and a DSQUARED Icon trucker cap, that was the look. But even that has changed thanks to players such as Hector Bellerin, Dominic Calvert-Lewin, and Serge Gnabry, all of whom have a deeper fascination and knowledge of fashion and brands.
The same can be said about the likes of Kelly Oubré Jr., Devin Booker, Shai Gilgeous-Alexander, or other players of that ilk. Their style seems effortless, well-thought-out, and — most importantly — personal. That’s not to say that some of the older guys in the NBA can’t dress. Special shout-out goes to P.J. Tucker who, as the sneaker king of the league, sometimes flies under the radar (I mean,
look at this fit
).

But too often in the past have players showed up in ill-fitting tailoring (I’m looking at you, LeBron James-led Cleveland Cavaliers) or flamboyant outfits composed of expensive brands that just screamed, “I’m only wearing this to get on Highsnobiety.” All jokes aside, this isn’t a post to dump on NBA veterans, but rather to celebrate a new generation of basketball stars and their decidedly on-point style.
While there are now a plethora of names to choose from — unthinkable only two years ago — we’ve identified five next-gen NBA players whose style we seriously fuck with. All five players, along with their best fits, are outlined below.
The new-age NBA player’s style is too nice. Here are our five favorites.
Shai Gilgeous-Alexander
View this post on Instagram
Shai Gilgeous-Alexander has somehow flown under the radar, but he has made a good case to be considered the most stylish of our top 5. The best way to describe the Oklahoma City Thunder point guard is casual. Shai is most comfortable in T-shirts and jeans or a hoodie and sweats. If that doesn’t sound stylish to you, it’s because we’ve probably massively undersold just how capable Shai is of matching these staple pieces to create an interesting outfit.
The OKC star plays with different colors, textures, and patterns to create eye-catching fits that go beyond the “cozy boy” style. He makes looking comfortable effortlessly cool. Style is all about being able to see the bigger picture and matching pieces with one another to create a type of story. Shai does just that and more. If only we all looked as good in a hoodie and jeans but, alas, we are not Shai Gilgeous-Alexander.
Shop Shai’s Look

This Is What All Of Your Favorite ‘Gossip Girl’ Stars Are...

HHS Awards 15 Million to Combat the COVID-19 Pandemic in Rural...