Home Woman Rafael Nadal Is an Artist Too 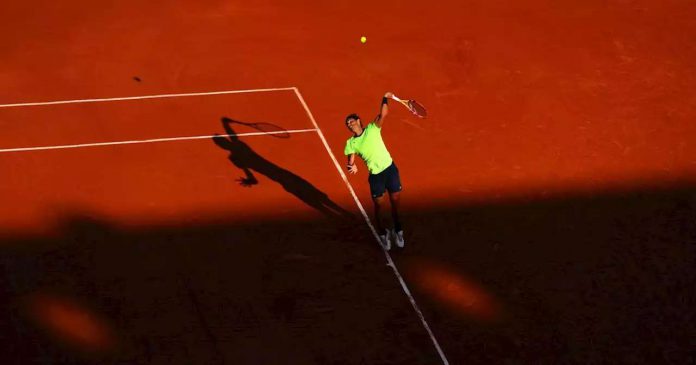 Federer gets all the odes. But there’s beauty in the King of Clay’s game — and in his foibles.

The artist at work. Photo: Javier Garcia/BPI/Shutterstock On Friday, Rafael Nadal, the undisputed deity of clay, will face Novak Djokovic in the French Open men’s semifinals. Should Nadal win and then triumph again in Sunday’s final, he will surpass Roger Federer in total Grand Slam championships and sit alone at 21. Since June 2005, when a baby-faced, long-haired 19-year-old Nadal in Capri pants played and won his first French Open, he has lost only twice at Roland-Garros: once in the fourth round to Robin Söderling in 2009 and again in the quarterfinals in 2015 to Djokovic. However these next series of matches should unfold, maintaining the courts on which they’ll be played these past 16 years has also meant brushing in another layer of Nadal history — of sweat and glory and lint and fatigue. His legacy is baked into the clay itself.
Nadal is a candidate for the greatest male tennis player of all time. But his signature quality — an otherworldly relentlessness — has helped obscure an artistry in his game that feels underappreciated. He certainly doesn’t embody the exalted refinement of Federer, for whom so many paeans have been written. But there’s beauty in Nadal’s game, in that amnesiac-style intensity to play each new moment with just the same rigor as the last, no matter how difficult it was. And there’s beauty in his actual style — in the way he drives winners from the baseline with his “lasso”-style buggy-whip forehand (named for the way the follow-through finishes up and around the hitter’s head). He opens his full self to take this shot, to parallel the ball as his left arm racks back in preparation. To see the shot in slow motion is to wince that the straightened arm will detach from his shoulder once the racquet makes contact with the ball. But it doesn’t. The racquet stays grotesquely angled, then whipped up and across his body, over the right shoulder, and finally around his head and back to earth again. He grinds out every point with topspin, with force great enough to land the ball deep enough on the court so that the opponent can’t attack it.
Clay demands endurance, the kind required to hurl toward a drop shot, then sprint backward after a lob and then speed-shuffle across the baseline four or five times to win the point. Perhaps that’s why Nadal approaches every practice as if he’s going to die at the end of it, as though every ball on his racquet will be the last it ever touches. So much of the seasoned talent on tour appears effortless.

Federer’s game is silk. Djokovic, robotics. Nadal leaves in the stress and the brutality of what it takes to win this much, for this long, for us to see. And there is grace in that transparency.
But the strangest beauty he exhibits are his tics — his “routines”. They are frequent in appearance and number, and delineate the moments of his existence on court. And he always fits them in. During the changeovers between games, he sits, shaking his leg, knitting his brow, restless and antsy to get on with it. He paces, he picks, he exudes an impatient, relatable, frenetic sense of perfectionism. Between games on the change of ends, he steadfastly (re)aligns his water bottles. Between points, he adjusts his shorts, yanking straight from the groin. Between serves, he tucks both sides of his hair and wipes his nose and smoothes his eyebrows. There is always some variant of touching, and tapping, and bouncing, and tugging happening to the very edge of the last second before he overtakes the ball. There is poetry in the reliability of these rhythms, metered by consistency.
And these routines are not separate from the game he plays — they bookend and punctuate and mark it. Over the years, they have been mocked, and pathologized. “Does Rafael Nadal have OCD?” They have been studied as proof of efficacy in the use of ritual. They’ve been listified and ranked and analyzed. They’ve been impersonated, and replicated. They’ve cost him time violations. But these visible, jarring adjustments, however scorned or accepted or misunderstood, are part of the flow to his greatness, of remaining mostly unbeatable (French Open record: 103-2) on the surface he has mostly dominated for close to two decades. He hides nothing, he filters nothing, from us, his audience; he makes no fanfare; he is unceremonious, it is just the doing of the thing that he does.
Earlier this week, Nadal defeated Italy’s lanky 19-year-old Yanik Sinner in the third-round, in three sets. It wasn’t a particularly notable match save for the sight of the tournament’s venerated champion, still winning in the way as only someone who has won it all before can do, with adapted rigor and a stockier physique and the quiet, unspoken sense that this will not last forever. That it’s as great as it can be until it’s gone — foibles transparent for the world to witness, a humanity on full display. But for now, at least, the greatest artist of the clay court surface is still in his residency.

Clear Your Schedule Michelle Obama Is Launching a Podcast

StopAsianHate Here’s How You Can Help – V Magazine

What to Watch in May ‘Pose’ Final Season New ‘Star Wars’...