Home Woman The Lasting Impact of High on the Hog’ 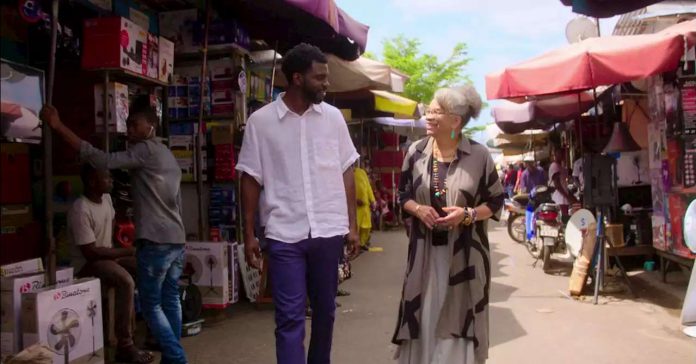 , and it was Karis Jagger and Fabienne Toback who read that volume and believed it should be a television show. And
High on the Hog
wouldn’t be what it is without the contributions of other Black creatives, including director Roger Ross Williams, whose “talent and the trust that Netflix has in him allowed the show to be greenlit,” and showrunner Shoshana Guy. “All the nuance required, all the care that’s required for the material, really needed a Black woman to be on the showrunning side,” Satterfield says. “And Shoshana did an amazing job.”
I spoke to Satterfield about the culmination of these efforts and the impact of
High on the Hog
. This interview has been lightly edited for length and clarity.
Eater: How are you feeling now that it’s out in the world?
Stephen Satterfield:
I’m very relieved. It was really strange to be in limbo with the announcement being made and the show having not yet been released, but obviously we’re past that point. The reception has been wonderful; it even exceeded my expectations.
What kind of expectations did you have going into this?
It’s funny, I knew you were gonna ask me that, but the truth is I actually didn’t have any expectations. I think what I meant to say is that I could have never expected the kind of feedback that we got. We hadn’t seen anything like this in the food and travel genre. The makers of the show, the subject of the show, was really about us reflecting our love for Black people and Black culture and appreciation for all those contributions, and I feel that Black folks throughout the diaspora felt that attention, they felt that care and love. That for me was by far the most gratifying part of the whole experience.
The show does such a great job of diving into the past and addressing that, but the overall feeling is one of joy. I think this quote from Omar Tate in the third episode encapsulates that idea: “A lot of times our history is dark, or we view it as dark. But there was just so much beauty between the lines and I feel like menus and food is the synthesis that happens in between the lines, in between history.”
Were you thinking about that as you were making it, and how did you walk that line between showcasing and acknowledging the history, but not becoming mired in the darkness of it?
We didn’t have to prepare for that, because that is really, I think, the authentic nature of Black folks in the United States, and really everywhere. This word that so often precedes any description of a Black person in the U.S., which is resilience, is there for a reason and it speaks to the kind of unbelievable ability and quality to bounce back and to have joy despite all the atrocities that our community has faced.
We didn’t have to give direction in the parts of our story that were somber or difficult. That sober feeling, that bad feeling is very easy to access. It’s always close to the surface, but that Black love and joy and community is also close to the surface. Omar is a homie, he’s someone that I respect. Filming in his company, eating his food — that’s joy, that’s a celebration in itself. Gabrielle [Etienne] is someone I love, admire, and respect. BJ [Dennis] and so many other incredible talents of our people, of our culture, and our story are reflecting it back to the world in an incredible way. It was just an honor to be able to share in that experience with them.
Stephen Satterfield and BJ Dennis filming for
High on the Hog
Netflix
Something else I really appreciated about the show was its scope. As I watched, there were parts that I learned from and others that just brought about a deep sense of recognition; as we’re going through the show, we can see you experiencing both sides of that. What were some of those learning moments for you?
Definitely in Benin everything was a revelation.

Romuald Hazoumè, the artist, I found him to be, as great artists are, so insightful and revelatory in his work with the oil cans and breaking down the geopolitics between Nigeria and Benin through that artwork.
Learning about the warrior women of Dahomey, it was a history that I had read about. But being in Dahomey, being on that red clay getting a sense of what life was like on the continent hundreds of years ago, how the many tribal groups all coexisted and lived alongside each other, and, as we see in the film, of course, are complicated — difficult complicitness is part of the story as well. These are things that you can read about, but seeing the physical environment, talking to descendants and talking to educators and historians in that place and space is a really profound learning opportunity that will stay with me forever.
In the first episode, food blogger Karelle Vignon-Vullierme says, “I don’t understand why African food is not as popular as Asian cuisine or French cuisine.” Do you feel that
High on the Hog
will move that needle?
It’s only been a week, but I do think that this show not only has the capacity and potential to change culture, but [also] show [running] culture. We’ve seen repeatedly in media and especially in the entertainment sector, when resources are given to Black creators to tell their own stories, they are extremely successful. We have seen the results of that repeatedly in Hollywood. And I hope that as far as food media and the food travel space, that this changes the idea about who can be a host as well as what kinds of ways we can tell stories about food.
You have a long and established career in food media; does the Netflix spotlight feel like a whole different arena?
It totally is, yes.
Where do you want to go from here? What’s next for you?
Well right now, I’m the CEO of Whetstone Media. I have a great deal of responsibility just running and growing our company. I will continue to focus on that, and I’m doing exactly the work that I want to do. Much like
High on the Hog
, the work that we do is about reclamation. It’s about pushing back against narrative exclusion and erasure and distortion and obfuscation and about reclaiming our own identities and power, and being connected to our history. You see this in the way that we present and promote that dialogue.
I think if anything the response for me has been validating for what has been my overall vocational thesis, which is food is a powerful way of connecting to people’s identities, of radicalizing people and of instilling some necessary pride in one’s culture that allows them to be themselves in the world. And hopefully by being secure in their own place in the world, they’re able to make the world more secure and more open for other cultures. I think this show has demonstrated that there’s a lot of truth in that thesis based on the really personal, intimate responses that I’m seeing from people all over the world.
Can you share any of those responses that particularly moved you?
One thing that I’ve been seeing a lot are letters from Brazil, from our cousins on the other side of this trade, who were statistically impacted in even greater ways than we were in the United States. That desire for connection, and the intensity and the intense gratitude of their writing, lets me know how deeply they were impacted by the show. That cousin connection for me has been the thing that hit me the hardest in the chest and also let me know how deep this material goes.
Sign up for the
Sign up for Eater’s newsletter
The freshest news from the food world every day
Thanks for signing up!
Check your inbox for a welcome email.
Email

Self-care rules these women live by