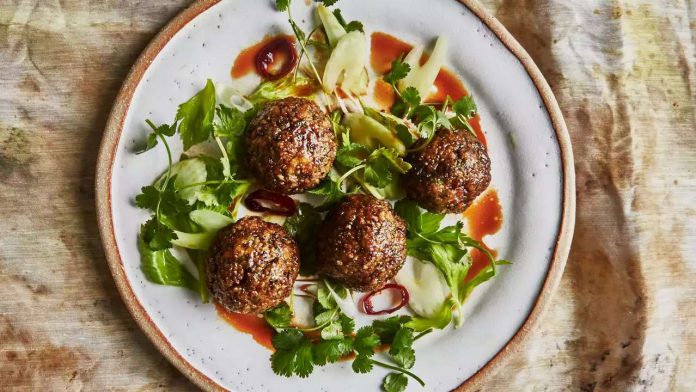 This vegetarian dinner features a spicy soy-honey glaze that caramelizes on the chickpea-mushroom balls as they cook.

I made these for my daughter who is on her way to becoming vegetarian. I followed the recipe exact and I think they are delicious. I am sure she will be asking me to make them again.
Anonymous
Rhode Island
10/23/2020
I made these and they were amazeballs. But I didn’t really follow the recipe. Since fresh shitake mushrooms are $$$ I used 1/3 lb fresh shitake mushrooms, 100 gm dried shitakes, and 1/2 lb brown mushrooms. I soaked the dried ones, sliced all the mushrooms roasted them with the chickpeas, and the finely chopped ginger and garlic and a generous squirt of sesame oil (a few tbsps?). Then I threw the roasted stuff in to the food processor with the green stuff and chopped to 1/4″ chunks. In a mixing bowl I mixed 3 eggs with 2 TBSP each white miso paste and tahini. Then added the chopped stuff with 1/2C gluten free panko. I founded I needed to add about 3/4 C of the mushroom soaking liquid to get it to the consistency of ground meat. I chilled it overnight, then rolled into 1 1/2″ balls and rolled these in panko. I then lightly oiled a cookie sheet with sesame oil and sprayed the tops of the balls with cooking spray. Baked at 425 F for 20 mins, turning once, until nicely browned all the way around.
Anonymous
Calgary, Canada
9/14/2019
I made a half recipe but used 2 eggs, for a slightly wetter mixture, and let it chill overnight in a bowl covered in plastic wrap. When I baked them, I set the oven to 325 instead of 350 and checked them after 15 minutes and keeping close eye on them until they were done.

Previous comments made me weary of dry meatballs so I think these steps helped keep them moist and flavorful. They definitely aren’t the consistency of meatballs but I really enjoyed them.
Anonymous
Miami
5/25/2019
For all the work the results are less than marginal. The oven temp is too high, there is too much salt in the recipe, the texture is more like a matza ball than a meat ball and the sauce over the balls is burnt at this temperature. I agree that it’s too expensive, not worth the effort and lacking in flavour and texture
Anonymous
Canada
10/25/2018
I enjoyed the flavour of these, but found texture just ever so slightly lacking. I may have pulsed the mushrooms a little too much. Overall they very aromatic and the sauce is super complementary to the savouriness of the meatballs. Served rather randomly with boiled new potatoes and a quick stir fry of broccoli, zucchini and chilies because CSA boxes make us do weird things for supper – but hey the potatoes soaked up the soy honey glaze really well and everything was fantastic.
toronto
8/29/2018
I think your oven temp or time is wrong. I followed this recipe exactly and ended up with the most dry, burnt veggie balls imaginable. I was really excited by this recipe because it seemed promising and I love the celery salad that went on top. In the end, after almost 2 hours of prep/cook/chilling time, I was humiliated by the outcome and threw half of it away.
kaletherine

Joseph Gordon-Levitt Roger Bomman – The Stars of ‘Angels in the...

Gogglebox apologises to Eamonn Holmes for editing scene about his dad’s...