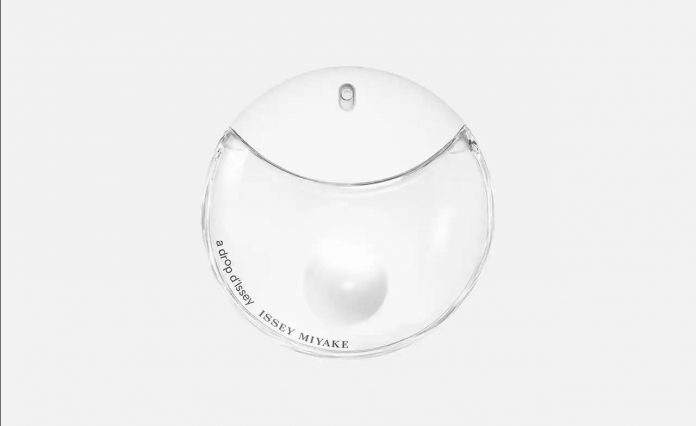 A Drop d’Issey is the new female fragrance from Issey Miyake Parfums. American designer Todd Bracher discusses his intriguing bottle design and the future of perfume packaging, as we look back at…

fragrance for women
, it was inspired by the purity of water infused with notes of lotus and rose. Compared to the heady, flavour-saturated scents of the 1980s and early 1990s, L’Eau d’Issey was a breath of fresh air and would prove to be the olfactory equivalent to the era’s minimalist aesthetic.
An original campaign image for L’Eau d’Issey, the revolutionary perfume by
Issey Miyake

A Drop d’Issey is not as impactful as its predecessor, but it carries on the brand’s tradition for watery florals. Perfumer Ane Ayo tried to capture the essence of a water droplet falling off a lilac petal by infusing lilac accord with notes orange blossom and an almond milk accord. It’s a gentle, clean
, well suited to those who prefer to go light on perfume.
Bracher’s bottle design
‘My approach was twofold,’ says Bracher about the process behind his droplet-shaped bottle design, which is intended to lie on its side rather than stand upright on the dressing table. ‘Firstly, giving a unique experience by how the bottle is cupped in hand, providing for more intimate interaction.

Todd Bracher’s bottle design for A Drop d’Issey
‘Secondly, this “lay down” approach allowed me to reduce the material for the bottle by about 10 per cent, which saves on cost while eliminating 10 per cent of the total footprint the entire Drop collection will have in our world.’
It was key for Bracher that the design have as little environmental impact as possible. ‘The glass [for the bottle] is 100 per cent recycled,’ he says.
As for the packaging, where, typically ‘much of the environmental strain is felt’, he adds, ‘this new approach made for a smaller outer box, which means more can be transported at once, and more can stock a shelf for less wholesale reordering and shipping.’
The future of perfume packaging
Bracher hopes the move towards more sustainable practices will extend throughout the perfume industry, although he recognises that process won’t happen overnight. ‘I believe the future of
will split into two paths. The traditional path is what we know now.
‘The production processes that are in place that make 99.9 per cent of all

11-year-old uses machete to defend himself against home intruder ‘I knew...

To All the Little Mustaches I’ve Loved Before