Home Woman This Bug Spray Smells So Good My Husband Occasionally Wears It As... 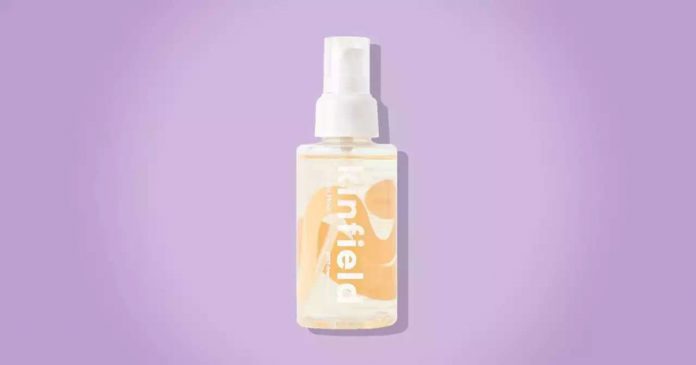 It’s citronella with lemongrass, vanilla, and a little bit of clove. And it works.

Photo-Illustration: The Strategist; Photo: Retailer After a 2011 weekend upstate when my legs sustained a constellation of mosquito bites that were so maddeningly itchy I could barely drive home, I started carrying citronella-based bug spray on most every grassy, woodsy, or watery outing. It doesn’t melt synthetic clothing like DEET does, it doesn’t leave my skin greasy like picaridin does, and unless I’m going to the Everglades, a few spritzes are typically enough to keep me bite free. As for the scent, I’ve actually started to like it. The zesty aroma reminds me of happy times playing in the sun and sitting around the campfire. There’s only one problem: My husband hates sitting near me while I’m wearing it. His first question when we get in the car to head home from camping or fishing is usually “Can we roll the windows down?”
Kinfield Golden Hour Bug Repellent $22 now 18% off $18 $18 at Anthropologie Buy $22 at Urban Outfitters Buy Since I like being bug-bite free and being near my husband, I knew I had to find an alternative. I tried CB I Hate Perfume’s 610 Outside, a lavender-geranium cologne meant to ward off mosquitoes, but it wasn’t quite strong enough for the woods. The same was true of a short-lived attempt to mix my own essential oils with vodka in a spray bottle (a trick I invented after reading one too many aromatherapy books). During my search, I saw rave after rave on Instagram for Kinfield’s Golden Hour — along with an endorsement from Strategist senior editor Crystal Martin describing the smell as “yummy” — so I finally ordered a bottle.

As soon as it arrived, I sprayed it on my arm to smell it. I thought it was downright fantastic, so I asked my husband. He agreed! The difference is, whereas other herbal sprays pair citronella with astringent notes like geranium, eucalyptus, and oregano, Golden Hour uses lemongrass, vanilla, and a little clove. The result is a much less sharp scent: more like citronella served with a dollop of whipped cream. (Basically, it smells exactly like my late-1980s Lemon Treats My Little Pony.) It smells so good, in fact, I’ve caught my husband using an occasional spritz as cologne. And it works, too. My mother, who is even more beloved by biting insects than I am, wore it on a marshy family hike and didn’t get a single nibble. And despite her applying six sprays in the car on the way to the trailhead, nobody asked to roll the windows down.
The Strategist is designed to surface the most useful, expert recommendations for things to buy across the vast e-commerce landscape. Some of our latest conquests include the best acne treatments, rolling luggage, pillows for side sleepers, natural anxiety remedies, and bath towels. We update links when possible, but note that deals can expire and all prices are subject to change.

Why A Negative Test Doesn’t Rule Out COVID

Our Son Was Killed at the Pulse Nightclub Shooting

Myleene Klass strips off to make a cast of her beautiful...