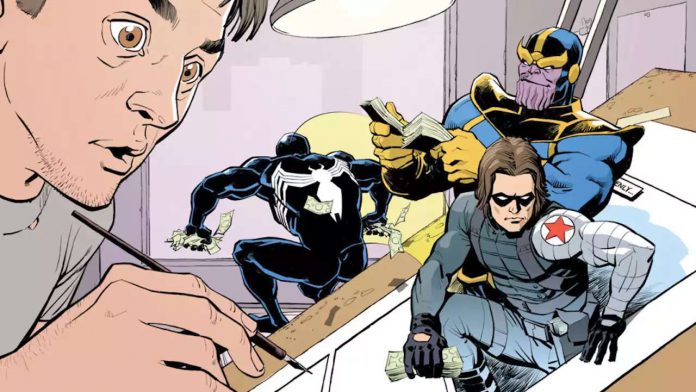 Marvel fans were flying high with the release of The Falcon and the Winter Soldier, as the Disney+ series rose to top Nielsen’s closely watched streaming chart with 855 million minutes viewed…

Why ‘Black Widow’ Writer Eric Pearson Felt Post-Credits Scene Guilt
Comic book history is full of stories of writers and artists who signed meager deals only to see their creations become icons, dating back to 1938, when Superman creators Jerry Siegel and Joe Shuster signed away the character for $130. But it was unusual to hear Brubaker and Coates, creators at the height of their careers, speak openly about the issue. It reignited a conversation about creator pay, and what obligation companies have to creators who signed contracts years before movies were grossing billions and media conglomerates were building streaming services on the backs of their characters.
Creators working at Marvel and DC sign work-for-hire contracts granting the publishers ownership over their characters and storylines. While it’s relatively simple to determine who gets compensation for a character, insiders familiar with Marvel and DC contracts note that it gets murky when it comes to storylines being adapted for film. There is no concrete policy at either company.
Multiple comic creators have publicly stated that DC’s payments for adaptations, in general, is higher. Comic creator Jim Starlin turned heads in 2017 when he publicly noted that Warner Bros. paid him more for a minor character that appeared in DC’s
Batman v. Superman: Dawn of Justice
than he received for Marvel’s major
Guardians of the Galaxy
characters Thanos, Gamora and Drax combined. After Starlin’s airing of grievances, Disney renegotiated his deal for Thanos, the villain of
Avengers: Infinity War
and
Avengers: Endgame
. Those films went on to gross $4.83 billion globally, and Starlin, while not sharing details of his deal, walked away happy. “The cliche is that the squeaky wheel gets the grease,” Starlin tells
The Hollywood Reporter
. “The way these agreements are written up, Disney can be more generous if they want. It is written right there that they can change the terms to make it better.”
There’s no legal obligation to make additional payments for adaptations, with companies such as Marvel viewing these payments as thank-you gifts — and
a way to avoid the bad publicity of warring with a creator.

“It’s ‘shut-up’ money,” as one Marvel creator who receives such payments, but also declined to share details of compensation, likes to call it. Even if companies have no legal obligation to compensate these writers and artists, paying more is akin to contract renegotiations with an actor. If a TV show or movie is a smash success, studios believe it makes sense to offer an actor more money for the sequel (or the next season of TV) to keep them happy. No one wants a bitter actor on set.
Since the 1970s, DC creators who added a new character to the mythos have been entitled to payments from film, TV and merchandising, an idea spearheaded by then-publisher Jenette Kahn. Christopher Nolan’s
The Dark Knight
trilogy, for example, drew upon the work of dozens of creators who received some form of compensation, sources say. Len Wein, the late Wolverine co-creator, said he received more money for creating Lucius Fox, the Batman character played by Morgan Freeman in Nolan’s films, than for creating the iconic X-Men hero portrayed by Hugh Jackman in nine movies.
For years, the job of determining payments on something like
The Dark Knight
fell to Paul Levitz, who served as DC’s president and publisher from 2002 to 2009. One payment category was money owed for creating a character. Other categories were murkier, such as comic storylines Nolan borrowed from, like the classic storyline
The Long Halloween
by writer Jeff Loeb and artist Tim Sale. Then there were categories even less easy to define.
“Christian Bale liked looking at Tim Sale’s work before he would go out and strike a pose,” says Levitz. “I’m not sure how you value that. But when you have a movie that is as successful as
Batman Begins
or
Dark Knight
, it says that there’s something there. And you should say thank you in some fashion.”
Conventional wisdom within the comic book industry is to go to Marvel and DC to build your personal brand, then leave, bringing that audience over to publishers that allow you to retain character rights.
“It’s copyrighted by you,” says comic book historian

Investing in the Sustainability Sisterhood

Inside Beyonce’s Private Birthday Trip to Croatia With Jay-Z and Her...