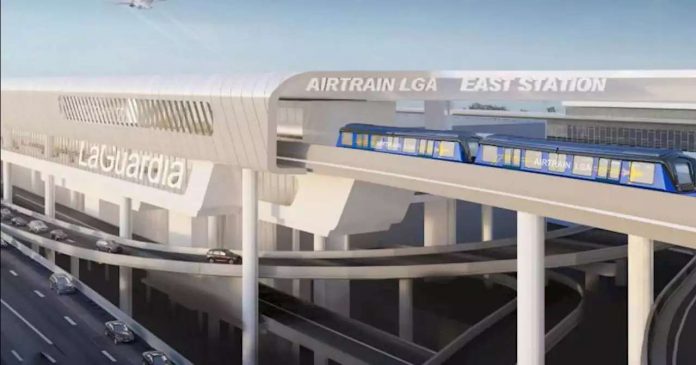 It’s not the best plan. But is “good enough” good enough?

Photo: Office of Governor Andrew Cuomo It’s official: The feds have approved the La Guardia AirTrain, and ground may be broken within a matter of weeks. It’s another win for Andrew Cuomo, who has become much more of a steamroller than the actual Governor Steamroller ever turned out to be. Among Cuomo’s big infrastructure swings, this one may be unique. It is—more than Empire Station, more than the Second Avenue line, more than the new (and extremely promising) La Guardia Airport itself—a Cuomo baby, for the simple reason that very few people besides Andrew Cuomo who care about good transit think it’s really the right thing to build.
Stipulated: La Guardia Airport needs a rail link. That has been true since it opened 82 years ago. In reality, it’s not nearly as miserable to get to or from La Guardia by mass transit as you may think — a brief bus ride from the terminals gets you to the 7 train, so if things are running as they should, you can be on the subway in 15 minutes and in Manhattan after another 20 — but, as has widely been noted, virtually every other major city lets you take a train to the airport. Nearly all have what’s called a one-seat ride: get on the train at the air terminal, step off in the central business district. The Giuliani administration got close to extending the subway to La Guardia, but funding was pulled after the 9/11 attacks. In this more recent push, there were about 30 rail schemes floated, most of them extensions of the N, the W, the 7, or the LIRR, many of them run aboveground, often ending in a subterranean station at the airport. There were also a few new trains and trolleys proposed, including the AirTrain. Cuomo seems to have settled on this one somewhat abruptly, and perhaps figured that he could coalesce support. He did get some entities lined up with him, like the Regional Plan Association, “Gridlock Sam” Schwartz, and Newsday’s editorial page. The construction trades, of course, love it, although they’d probably have backed any other plan that similarly called for a big build.
But the resistance has been wild. Both tabloids are against it, and the Times, in its Times-y it’s-news-analysis-not-opinion way, has reported about “concerns.” Also against it is Alexandria Ocasio-Cortez, in whose district it will be built and who has joked about finding herself for once aligned with the Post. So is Jessica Ramos, the state senator who represents the area around the planned train’s route.
That is, most likely, because it’s a flawed plan. The route out of La Guardia goes seemingly halfway to Great Neck, connecting to the 7 train at Willets Point, before doubling back into Manhattan. (Ben Kabak, the excellent transit writer known as Second Ave. Sagas, has nicknamed it the Backwards AirTrain.) Its cost has quintupled from an initial $500 million to more than $2 billion, or more than $1 billion a mile. Its impact on the bay is not entirely negligible, and the conservation group Riverkeeper was able to delay the FAA’s final approval of the plan — if only briefly — by unearthing documentation showing that the environmental review may have been skewed in favor of the governor’s plan. To be fair, an environmental case can be made against virtually every construction plan, and a NIMBY argument as well. But the great majority of people who study how we get around (minus the governor, who, say what you will, is clearly serious about transit) seems to think that a subway extension is a better bet than this train. Given that we get only one crack at this, and we’ll be stuck with it for a century, you’d think we’d go for a plan that’s more direct and more widely considered the best one.

Why, then, is Cuomo so stuck on it, so willing to roll over all the opposition rather than get behind a significantly more utile plan? One thing we know about him is that he is very much a believer in the art of the possible. We all, to an extent, make major decisions this way: At one end of the spectrum you have the fabulous solution that probably can’t be made to happen, and at the other end you have the practical one that is joyless and not very good and cheap and can be brought into being with barely any effort. Indeed, we all choose a spot somewhere along that continuum at times. Cuomo consistently chooses the thing he can get done soon by using the power within his grasp. He memorably demanded that the first tranche of the Second Avenue subway be opened on time, lashing his managers to get it done by his January 1, 2017, deadline; the same went for Moynihan Train Hall. (Both made their deadlines.) The project supports his preferred image, that of the neoliberal Robert Moses — a Moses without the rank and unvarnished racism, one who nominally listens, at least a little, to the neighborhoods he is affecting. (Though he plans to run train tracks through East Elmhurst, he will probably never explicitly tell the residents that sometimes you have to “hack your way with a meat ax.”)
Cuomo seems to have pegged all the plans that are smarter or more efficient as unbuildable, for one reason or another, leaving him with this as the best solution he thinks he can get done. The subway extensions were said to cost several times more than the AirTrain, which is probably why he looked elsewhere (although the AirTrain’s cost has ballooned to the point where an N train extension would now cost perhaps 50 percent more than, rather than five times as much as, the AirTrain). Avoiding the subway also avoids the MTA, a huge and sprawling organization that, although under Cuomo’s control, has requirements and ingrained habits that tend to make construction happen slowly and expensively. Dedicated bus lanes, while promising and comparatively cheap, don’t have the panache or permanence of a rail line, and they usually require that something (traffic lanes) with a dedicated constituency (car owners and car parkers) be taken away, whereas a rail line is new. Other schemes hit various other physical or organizational snags of resistance. In the traditional maxim “don’t let the perfect be the enemy of the good,” the AirTrain was the good, or perhaps the good-enough. You do really wish we could do a little better than that for our $2 billion.
Given that it is almost sure to happen now, there is this consolation: New Yorkers have, collectively, learned to live with a lot of non-ideal systems. The subway itself is the most obvious example. It was built by three separate and competing private companies, merged and taken over by the government in 1940. No sane single planner would have laid out the maze of interconnections that constitutes, say, the Times Square stop. We tolerate it; we have made it work; and if we end up with a not-exactly-ideal AirTrain that operates into the 22nd century, we will do the same. “I want projects that are real as opposed to theoretical,” Cuomo told reporters recently when asked about alternatives like subway expansion. “When the world is perfect, then I’ll do it.” The AirTrain technology has also been tried out in its Kennedy and Newark counterparts, and there, it has been proven to be pretty okay. We know — Cuomo knows — that we can build it because we’ve done it already, twice. If he runs for and wins another term, he might still be around to cut the ribbon.

How Drew Scott and Linda Phan Built Their Forever Romance