Home Woman Ariana Grande and The Weeknd Team Up for Astonishing ‘Off the Table’... 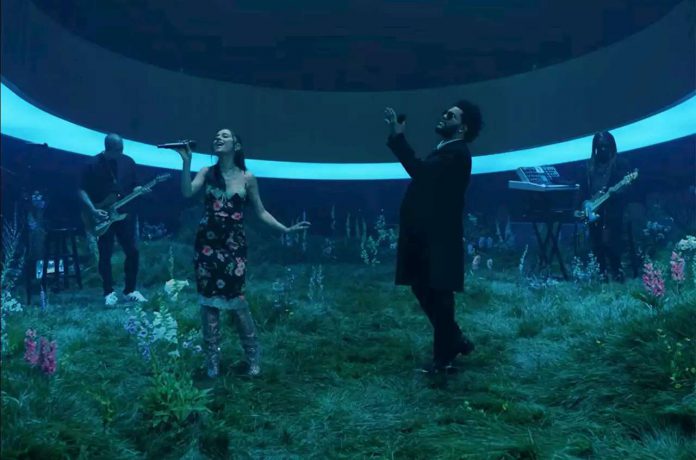 Ariana Grande teamed up with The Weeknd for her Vevo live performance video of their track ‘Off The Table,’ released Wednesday (July 21) on YouTube. Watch it.

. The two pop stars teamed up for Grande’s second-to-last set with a gorgeous performance of their
Positions
track”Off the Table,” released Wednesday (July 21) on YouTube.
The video is the fifth of Grande’s live
Positions
collaborations with Vevo and follows renditions of”POV,””Safety Net” (which featured an appearance from Ty Dolla $ign),”My Hair” and most recently,”34+35.” Next up is”Positions,” which will arrive July 22 and — to the dismay of Arianators everywhere — will mark the last of the singer’s Vevo performances.
Wearing sparkly silver boots and a floral dress to match the performance setting — a meadow of glowing flowers — Grande opens the video by herself, with The Weeknd walking into the frame only when his verse begins. Both are known for the soft-but-powerful nature of their voices, and their vocal chemistry is evident as they harmonize and trade riffs throughout the video.
Artists Mentioned

What August has in store for your star sign

Logan Paul Says Jake Paul Should NOT Have Been at AZ...