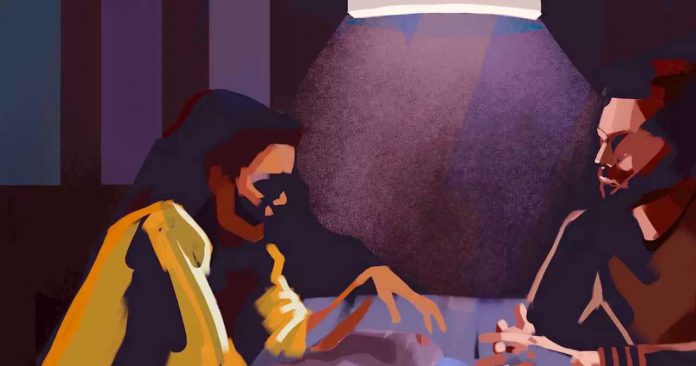 Would face-to-face meetings between a victim and an abuser — a form of restorative justice — help a society overwhelmed with toxic behavior?

TROY: Honestly, when I heard about the dialogue, I thought, If this is going to help keep me sober, I’ll do whatever it takes. To sit across from another individual and do this — if it helps them, and in turn helps me, then I’m okay with that.
Restorative justice is a modern interpretation of a very old idea: Its central principles resemble the conflict-resolution methods of Navajo and Maori people, among others. Its contemporary western form can be traced back to one spring night in 1974, when two teenage boys slashed tires and broke windows all through a Mennonite community in Ontario. A court officer named Mark Yantzi was handed the case. After the boys pleaded guilty, Yantzi noticed that the legal system offered no mechanism for them to literally repay their debt to the people whose property they’d damaged.
Yantzi proposed to the judge that they all try something new: The boys would knock on the door of each victim’s house and ask what the damage had cost them. A few weeks later, the boys would return, this time with money to repair the houses or cover insurance costs. One of the homes they visited was owned by a woman who had lived in it nearly all her life. Before, she had never locked her doors or felt unsafe. The house had a picture window, and the boys had thrown a brick through it. She told them that after the vandalism, she became so fearful that she couldn’t be at home alone. “But now I sit across from you,” she said to the boys, “and I see that I really had no reason to be afraid.” “You got a sense that they were making connections … that helped to kind of bind them back into the community,” Yantzi later said.
Yantzi’s early experiments unfolded alongside a growing awareness among progressive-minded activists that sending people to prison is a dehumanizing practice that answers violence with more violence, rather than with rehabilitation. As they searched for more holistic, less punitive ways to resolve criminal cases, community groups and allies in the legal system picked up Yantzi’s work and added to it.
Nearly five decades later, restorative justice encompasses many interconnected ways of resolving conflict, both within the traditional justice system and outside it. The idea, for example, of atoning for the destructive violence of slavery through reparations is rooted in restorative principles. Forty-five states allow some form of restorative justice into their criminal proceedings; a judge can divert a case into a restorative process — so that a young or first-time offender might avoid a conviction, for instance — or a victim’s family may ask for their case to be resolved this way. In other instances, those involved in a crime might turn to nonprofit restorative-justice programs long afterward to bring closure beyond what the courts could offer. And in cases of domestic and sexual violence, such processes could be a potential way of seeking justice in the many situations where prosecutors decline to bring charges.
The fact that restorative justice was an option available to Cheryl as a survivor of domestic violence was deeply controversial even ten years ago. In the ’70s, while Yantzi was looking for ways to resolve cases outside the courtroom, mainstream feminist activists were trying to get the legal system to take domestic violence and sexual assault seriously. The system had long told women who were abused that it was a private matter to be worked out with their boyfriends or husbands. Many activists thought that enacting laws against domestic and sexual violence would help survivors find justice and dissuade men from harming women. So they fought to pass legislation requiring arrests in domestic-violence incidents, criminalizing marital rape, and making it easier for women to take out restraining orders against men who harmed them.
The problem was this strategy mostly didn’t work. In 1995, the year after the Violence Against Women Act was signed into law, the National Institute of Justice noted that there was “little conclusive evidence” that criminalizing domestic violence actually discouraged offenders or protected victims.

Even now, as more and more people admit that legal solutions alone aren’t enough, the question of whether restorative justice is appropriate in cases of rape and domestic abuse has not gone away.
“More police and more jails are never going to solve the problem,” says Beth E. Richie, who leads the department of criminology, law, and justice at the University of Illinois, Chicago. “There was never any illusion that we could arrest our way out of this thing.” As an anti-violence activist in the 1980s, Richie saw how cops used force with Black communities: It mirrored the violence many women experienced from their partners. She and her fellow organizers instead advocated for another approach, one that acknowledged patriarchal abuses of power. They did not want to simply remove offenders from their communities. They wanted their communities to work with offenders and help them figure out how to stop being violent, and they wanted women who had been abused to be able to express what they needed. In a lot of cases, it turned out, what those women wanted was not to be questioned by detectives or cross-examined in open court but to talk about what had happened on their own terms.
CHERYL: The majority of what I wanted was to be heard. And I wanted to hear the truth, and I didn’t know if he could tell me his real truth or not. I wanted to ask, “What do you believe set you off?” I could tell he didn’t know how to talk to me about what had happened. But I just went for it. I thought, This is my time to ask those questions that have been controlling me.

These are the 70 comfy shoes