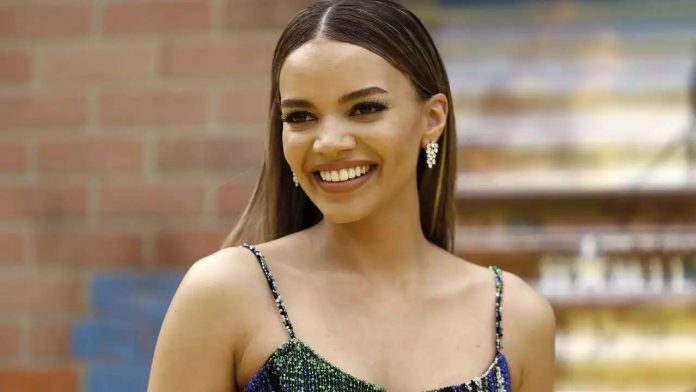 Leslie made her feature film debut in ‘In the Heights,’ but the 26-year-old singer already has a long list of accolades.

with Becky G, Roselyn Sanchez, Gloria Trevi and Aracely Arámbula.
“I am so excited to be a part of such a huge night,”
Leslie previously told ET
ahead of the awards ceremony.”It’s a special night too because we’re sending out a really big message, which is ’empowering women.’ It’s been such a huge year for women and the conversation that we have been putting out there. So I’m excited with the message we’re going to be giving audiences as co-hosts and performers.”
This video is unavailable because we were unable to load a message from our sponsors.
If you are using ad-blocking software, please disable it and reload the page.
Film Debut
In April 2019, it was announced that Leslie was cast as Nina Rosario in
In the Heights
. In the film, Nina is known as the”good girl” who is the first in her family to go to college and who the barrio knows as “the one who made it out.” However, after being away, she realizes that life outside of Washington Heights isn’t as easy.
“I auditioned about two years prior to my final audition,
back when it was under the Weinstein Company
and it was my very first in-person movie audition in L.A. I was so green and so nervous but Jon, our director, was soooo warm even then,” Leslie recalls.”After year and a half of continuing to self-tape, audition and test for a bunch of stuff while doing music, it was time to audition in front of Jon, [writer] Quiara [Alegría Hudes] and [casting director] Bernie Telsey — this time around after casting kicked back up under Warner Brothers.”
“I had learned by then that if I wasn’t right for the part of Nina, the best thing you can do in any audition in front of the same people is demonstrate growth. I made that my goal!” she continues.”Soon after that I would be asked to stay in NYC for the rest of the weekend to chemistry read in front of Lin and what became some of our incredible cast, including my bomb screen partner, Corey Hawkins.

We happened to walk into the building from opposite sides of the block at the same time… and the rest is history!”
The Best Birthday Surprise Ever
Leslie revealed that Miranda FaceTimed her on her birthday to tell her she landed the role of Nina.
“He had no idea it was my birthday and he was calling me to let me know that I got the role for Nina [in]
In the Heights
The Kelly Clarkson Show
.”It was the best birthday gift I’ve ever received.”
After wrapping the film, Leslie expressed,”It was beautiful, on my first experience as an actress to experience that.”
As for what she hopes people get from watching
In the Heights
when it hits theaters and the HBO Max streaming site? “Hope! The opportunity to celebrate life again…even in the thick of the strife it may bring!” she tells ET.”I pray it makes all those little boys and girls and grown men and women that have yet to see themselves onscreen in a feature film feel absolutely seen and celebrated in their fullness!”
What’s Next?
Leslie will definitely be pursuing an acting career and already has her next gig lined up. For her second role, she landed the coveted role of Barbara Gordon in
Batgirl.
Deadline
, the upcoming Batgirl film will debut on HBO Max, marking one of the first major DC properties to premiere exclusively on the streamer. Adil El Arbi and Bilall Fallah will direct the film from a script by Christina Hodson, while Kristin Burr is producing.
The entertainer also has new music on the way.”I plan on continuing to pursue all the ways I know how to express what I have within that I think may be worth sharing, and learn new ways to share what I’ve yet to express!” she exclaims.”So excited about what is yet to come!”
Be sure to keep an eye on Leslie as her light is shining brighter than ever. See more in the video below.
GET THE ET NEWSLETTER

How to Watch the 2020 MTV Video Music Awards