Home Woman Netflix’s Never Have I Ever’ Is a Very Good Teen Comedy With... 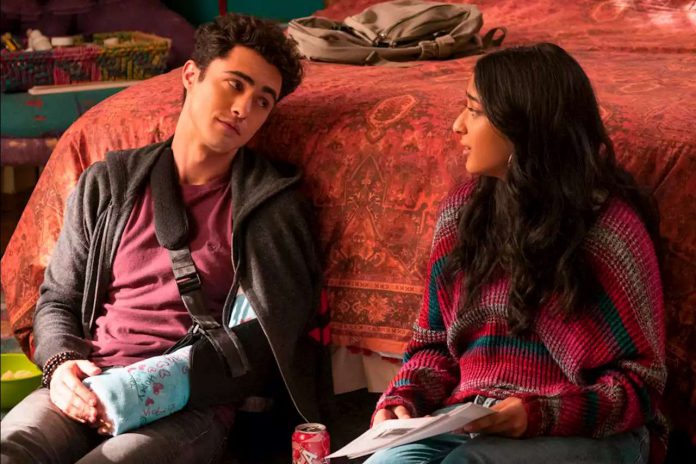 “Never Have I Ever” is a great teen comedy — with one glaring, omnipresent exception. Three episodes into the second season, a new voiceover (briefly) takes over the Netflix show. “You …

John McEnroe
voicing the innermost thoughts of Indian-American teen Devi (Maitreyi Ramakrishnan), it’s as logical a choice as any other. But Hadid’s voiceover quickly proves just as flat and unnecessary as McEnroe’s, exposing a frustrating flaw in an otherwise very entertaining teen comedy.
In the first episode of Mindy Kaling and Lang Fisher’s series, McEnroe introduces himself as our guide to Devi, eventually revealing that he was her father Mohan’s favorite tennis player before his sudden death. Waiting for that connection to reveal itself was one of the first season’s initial hooks, and on an emotional level, it pays off. Pressing play on the second season, though, I was rather hoping not to hear McEnroe’s voice. After hearing him try to express teenage excitement over the course of 10 episodes, it became clear that his commentating career didn’t necessarily prepare him for one in voiceover, a specific and trickier than meets the eye form of performance that requires more nuance than McEnroe’s flat affect ever grasps. The difference between an actor who knows how to narrate and a person enlisted for the fun of it becomes even more stark in “…been the loneliest boy in the world,” an episode that trades Devi’s inner monologue for that of her school rival Ben (Jaren Lewison), whose pithy voiceover came courtesy of comedian Andy Samberg.
At the very least, the “Never Have I Ever” scripts are self-aware about the jarring clash between the characters and their narrator counterparts. As aforementioned, Hadid immediately admits that she might seem a strange choice to narrate Paxton Hall-Yoshida’s life.

Just about every episode sees McEnroe point out how weird it is that he’s the one telling Devi’s story, whether literally or by reacting to her adolescent misadventures with a world-weary sigh. But even these winky moments don’t make up for the inherent disconnect between Devi and her thoughts as relayed by McEnroe. The show can give him a million jokes to milk the oddity of his presence, but he still has to deliver them with something like finesse.
The real reason it’s so frustrating to listen to one-note narrators like McEnroe and Hadid, though, is that they’re ultimately unnecessary. Voiceover can be an effective TV tool when used right, but it more often ends up an obvious shortcut for writers to say exactly what their characters are thinking and feeling without letting their viewers figure it out for themselves. If “Never Have I Ever” was truly determined to have voiceover, it already has excellent options in actors like Ramakrishnan, Barnet, Lewison, Ramona Young and Lee Rodriguez, all of whom have proven to be very good at what they do. When you already have extremely charming performers who know their characters inside and out, why not trust them to be the ones giving us a peek behind the curtain instead of turning to more famous options first?
The first two seasons of “Never Have I Ever” are currently available to stream on Netflix.
optional screen reader

Women Do Most Of The Emotional Labor For A Family —...