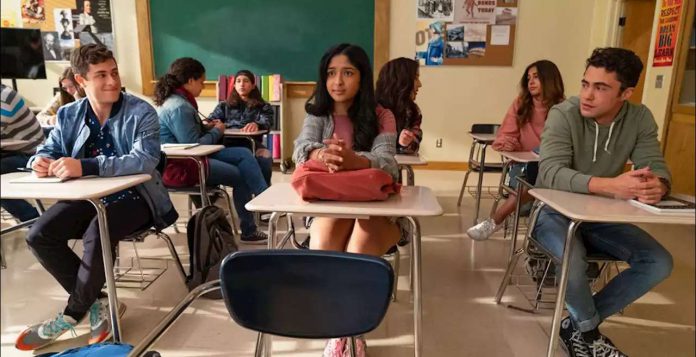 he hoped to see a Paxton-centric standalone arc.
And the writers delivered, with Episode 3 digging into the inner workings of Paxton’s beautiful mind.
While the first season’s focus on Paxton was more superficial in nature, Barnet says, “now you’re really starting to see that onion have its layers pulled back. And just like an onion, I think it can bring the tears and it can bring some joy.”
Whenever the show dips out of Devi’s point of view, the episode comes with a new narrator. In Season 1, Ben got Andy Samberg, while Paxton’s episode was
originally narrated by Chrissy Teigen.
However, just weeks before the season was set to launch, they had Hadid step in and rerecord the voiceover instead. (Samberg also returned for a quick vocal cameo in Paxton’s episode.) If “Never Have I Ever” continues the tradition in future seasons, Lee Rodriguez would like Queen Latifah as Fabiola’s narrator and Suri wants Pedro Pascal, while Poorna Jagannathan and Richa Moorjani may have to fight it out over who gets series creator Mindy Kaling to voice their characters’ innermost thoughts.
Barnet says the highlight of getting this kind of episodic treatment was “showing that there is a heart beneath the pectoral muscles that are so famous with Paxton.”
As the episode explored more of Paxton’s culture, heritage and home life, the story arc helped the actor find greater appreciation for his own multiethnic background.
“It’s made me feel so proud. And it’s allowed me to develop a voice I didn’t know I had,” Barnet says. “I get guessed as white, Latin, part Asian, part this, part that. And I never wanted to lead with, ‘I’m part Asian’ because I understand I’m not in that box when you look at me. I never, I guess, felt Asian enough, per se, to claim that as my heritage.”
“This show has given me a lot of voice in terms of [realizing] there are a lot of people like me in the United States and in the world, where you don’t know exactly what they are and they don’t fit into a certain box, and they’re kind of scared to choose one or the other,” he continues. “I’m very proud to be part Japanese. I love it — I want to shout it from the rooftops — and this show has made me a lot more comfortable with that.
Despite looking beyond the surface, Paxton’s pectoral muscles are still on full display this season, too. Barnet weighs the pros and cons of all those shirtless scenes. The pros, according to the actor, are that “They’re just hilarious and fun, and obviously it’s flattering being complimented on your physique.” But the cons are that “You get more focus on your physique than your emotion. And also it’s 60-degrees on those soundstages, and I’m getting sprayed with water, so it’s freezing.”
NEVER HAVE I EVER (L to R) COMMON as DR. JACKSON and POORNA JAGANNATHAN as NALINI VISHWAKUMAR in episode 209 of NEVER HAVE I EVER Cr. ISABELLA B. VOSMIKOVA/NETFLIX © 2021
ISABELLA B. VOSMIKOVA/NETFLIX
Nalini Gets Some Love
The new episodes offered a chance to go beyond Nalini’s (Jagannathan) role as Devi’s super-strict mother, instead offering a window into her work as a physician and more nuanced space to appreciate her as a woman and grieving widow.
“Season 2 is a deeper exploration into grief. And it’s kind of unbelievable that a YA show captures one of the most beautiful experiences of grief,” Jagannathan says. “It is also a portrayal of how moving forward is not the same thing as moving on.”
Nalini and Devi were still very much in the middle of their grieving process, she notes, despite scattering Mohan’s ashes at the end of Season 1. “They’ve accepted that Mohan has died, but they’re still in the middle of that trauma of losing someone you love, who held the family together the way he did.”
As such, the season began with Nalini hell-bent on moving the family to India, which forced her into the orbit of a neighboring physician (Common) when she tried to sell him her client list. But instead of making a deal, Nalini unexpectedly ventured back into the dating pool, with her sparring partner becoming her new crush. The storyline built from the same type of fireworks as Ben and Devi’s nemesis-turned-crush relationship, but on a more adult scale.
Jagannathan describes working with Common as “exactly how you think it is.” Explaining why she thinks the storyline is so effective, she adds, “I did not realize that Nalini actually feels immensely seen by Dr. Jackson, and that’s what I think Common brought to the role.”
“Common has so much compassion to the way he approaches life and the way he interacts with everyone,” she explains.

“If he’s talking to you, he’s only talking to you. He has that wonderful quality to him.”
However, as the series continues, Jagannathan hopes to spend more time learning about Nalini and Mohan’s love story.
A few flashback scenes pointed to couple’s personal ups and downs — including a moment when Mohan admits he didn’t show up for Nalini’s award ceremony out of pettiness and pride — but Jagannathan is particularly interested in featuring their early years as immigrants.
“I’m an immigrant — I came here for college — and the fresh immigrant experience is a very beautiful, funny, painful thing,” Jagannathan says, explaining that Nalini’s trip back to India in Episode 2, was particularly significant and familiar.
“The longing of the immigrant to go home, only to find out it’s not home anymore, [that feeling is] so universal, and so tragic,” she explains. “I do want to know what a fresh start looked like for them and all the obstacles that they faced.”
NEVER HAVE I EVER (L to R) MEGAN SURI as ANEESA and MAITREYI RAMAKRISHNAN as DEVI VISHWAKUMAR in episode 205 of NEVER HAVE I EVER Cr. ISABELLA B. VOSMIKOVA/NETFLIX © 2021
ISABELLA B. VOSMIKOVA/NETFLIX
Aneesa’s Eating Disorder
After Devi spent most of the 24-hour relay in Episode 5 trying to keep Aneesa and Ben from hooking up, she angrily (and accidentally) starts a rumor that the new girl has an eating disorder. Much to Devi’s dismay, she quickly learned Aneesa was actually battling anorexia.
Most of the plotline revolved around Devi learning that her words have consequences (she gets suspended from school after pretending to help Aneesa figure out who started the rumor) and learning how to properly apologize without making someone feel worse (as in skip the public song-and-dance number, literally, and admit that you were out of line). But the team behind the show was also cognizant of the impact the story could have on viewers.
“[Showrunner, writer and executive producer] Lang Fisher, [creator and executive producer] Mindy Kaling and all the writers consulted with doctors and made sure that the storyline revolving around anorexia was as relevant, up to date, and as realistic as possible,” Suri says.
The actor adds that she was initially drawn to Aneesa because the character wasn’t “the surface level, cool, popular teen. She’s got so much so much stuff brewing inside, and that she’s dealing with. As an actor, that’s gold.”
But she wasn’t clued into the storyline before booking the role.
“I had no idea that this was the trajectory of her whole storyline,” Suri explains. “So I did a lot of research into it as well. You combine that with the seamless writing, and it wasn’t necessarily very difficult to generate those organic emotions to hopefully portray that storyline as authentically as possible.”
NEVER HAVE I EVER (L to R) RICHA MOORJANI as KAMALA in episode 201 of NEVER HAVE I EVER Cr. ISABELLA B. VOSMIKOVA/NETFLIX © 2021
ISABELLA B. VOSMIKOVA/NETFLIX
Kamala’s Toxic Work Environment
As Devi has often pointed out, Kamala (Moorjani) is so attractive that it distracts people from realizing she’s such a nerd. But in Season 2, the double-edged nature of Kamala’s experience as a beauty with a brain comes front and center as the scientist is sidelined professionally at her new lab and forced to work, while her team of all-male colleagues go out to play.
“What Kamala goes through as a woman of color in STEM getting her PhD is a very common experience that happens to women and women of color,” Moorjani says. “Often their names are not credited for their work, their voices are completely erased, they are often invisible in these fields.”
Though Kamala eventually channels her inner Devi and stands up for herself, demanding credit for her discoveries, after her supervisor Evan (P.J. Byrne) tries to keep her name off a paper being submitted to a scientific journal.
It’s a tale as old as time Moorjani notes, but it’s something that even she didn’t realize was so prevalent until she learned she’d be tackling the storyline.
“I’m so glad I do know now because it’s infuriating,” Moorjani says, adding that she’s hopeful the storyline might have some impact. “When we talk about these things, the first step to change is awareness.”
Seasons one and two of “Never Have I Ever” are now streaming on Netflix.
optional screen reader

Will Ashwagandha Supplements Help You Sprint Past the Competition?

How Chanel’s Fit Model Is Doing Quarantine in Paris