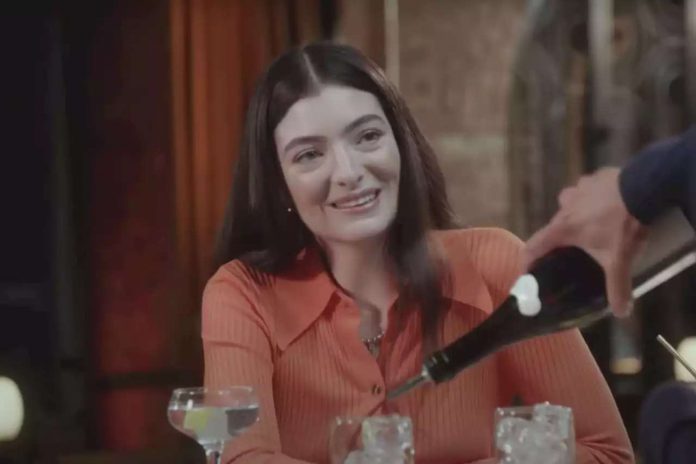 Go Day Drinking” segment, it has been “a long 18 months of sitting in our apartments.” Now that bars have reopened, Meyers revived his
Late Night
day drinking segment at Zero Bond in New York with his sole guest for the night, Lorde.
During the playfully drunken segment, the host made cocktails named after songs from Lorde’s upcoming album,
Solar Power
. They drank a “Solar Power” made with iced coffee, Red Bull, espresso beans and Four Loko. Meanwhile, “Ribs” included gin with a spare rib dunked in it.
They also played drinking games, which included guessing the meaning of New Zealand and New England slang terms, and naming different royals.

Later, they vied for who could paint a better cover of
Melodrama
and Meyers attempted to mimic Lorde’s performance of “Green Light.”
Lorde also performed her new song “
” with Jack Antonoff during the episode.
Solar Power
will arrive on August 20th via Republic Records. The singer will embark on a world tour next year. The North American leg kicks off on April 3rd, 2022 at the Opry House in Nashville, Tennessee, and wraps on May 7th at the Santa Barbara Bowl in Santa Barbara, California.
In This Article:

How To Wear Shorts When You’re Over 40 – fountainof30 com

5 Stretches That Will Loosen Your Tight Hips Fast