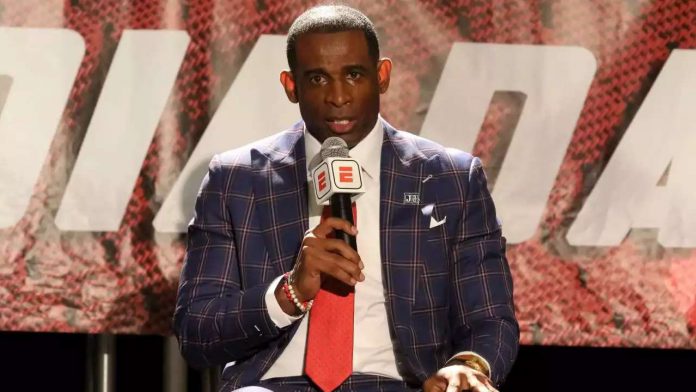 The NFL legend and head coach of Jackson State wants to be referred to as ‘coach.’

Deion Sanders Leaves Interview After Being Called Twice by His First Name and Not Coach
By
1:36 PM PDT, July 21, 2021
Michael Wade/Icon Sportswire via Getty Images
As the head football coach at Jackson State University in Jackson, Mississippi,
wants to be referred to as”Coach” and nothing else.
During the 2021 SWAC Football Media Day in Birmingham, Alabama, on Monday,
ESPN
reports that the NFL Hall of Famer made it very clear to one reporter that he did not want to be called by his first name.
“You don’t call [Alabama’s] Nick Saban, ‘Nick.’ Don’t call me Deion,” Sanders told reporter Nick Suss from the
Clarion Ledger
, referencing the seven-time national champion head coach.
The reporter apparently referred to Sanders as”Deion” twice, to which the college coach noted that “if you call Nick [Saban], Nick, you’ll get cussed out on the spot.”
He added,”So don’t do that to me. Treat me like Nick.”
According to the
, Sanders, who led Jackson State to a 4-3 record last year, walked out of the press conference after he was called”Deion” for a second time by the reporter.

Suss told the
Clarion Ledger
that”when I interview people, I call them by their first name. Whether it’s someone I’ve been working with for years or someone I’m talking to for the first time.”
Sanders, who has gone by”Neon Deion” and”Prime Time” when he was playing football, now uses”Coach Prime” as his Twitter handle. The 53-year-old coach later posted a video of the moment with the reporter and further explained his stance on not being called by his first name.
This is how all of this started, I really Pray for all of us because this was something so minimal that was hilarious to me that you allowed a FOOLISH media outlet and person to play on your Preconceived notions. I’m all about Peace,Love,Work,Commitment,Sacrifice & Forgiveness.

The Bottle Cap Challenge Spins On Helped by Cars Sandals and...

Congrats You’re a Decent Guy! Shelby Lorman Has an Award For...