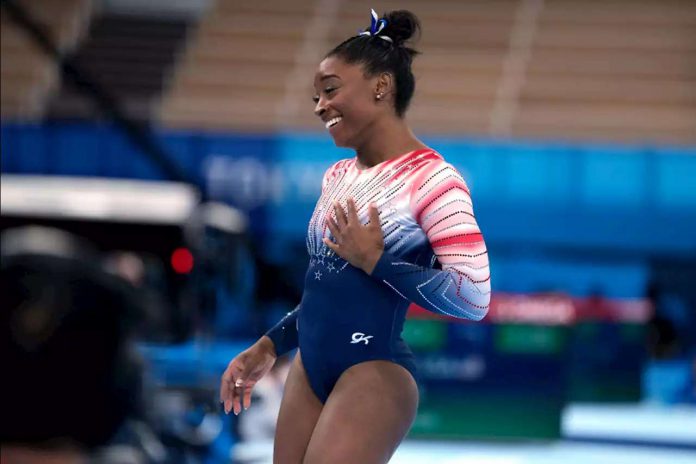 Decorated Olympian Simone Biles was back with a bang at the Tokyo Olympics today, securing a bronze medal in the beam final. Her impressive routine registered a score of 14.000, placing her third b…

Olympics
today, securing a bronze medal in the beam final.
Her impressive routine registered a score of 14.000, placing her third behind Chinese pair Tang Xijing, who won silver, and Chenchen Guan, who snatched gold with the event’s final performance.
A perfect dismount by Biles was greeted with rapturous applause from her teammates and other on-watching spectators after a difficult week in Tokyo for the U.S. gymnast. The slick routine marked an impressive recovery from the 24-year-old, who withdrew from her last four Olympic events after struggling in the Women’s Gymnastics Team Final, when she recorded the lowest vault score of her career.

Biles cited the need to preserve her mental health in not taking part in the previous events. She recently revealed that she was suffering from “twisties,” a gymnastics term that describes when a competitor is struggling to make safe landings, leaving them vulnerable to serious injury.
Watch on Deadline
Today’s result swells Biles’ trophy cabinet even further, taking her Olympic tally to a stellar eight medals, including four gold, one silver and now two bronze.
Subscribe to
and keep your inbox happy.
Read More About:

There are 3 different types of people as lockdown eases Which...