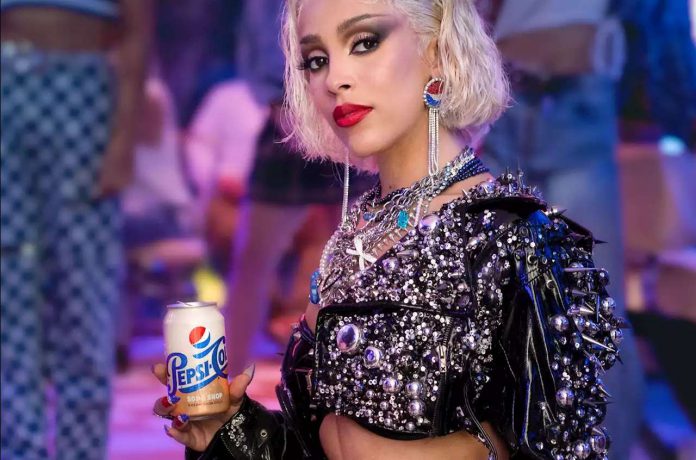 Doja Cat talks to Billboard about starring in Pepsi’s new ad, and channeling Sandy from ‘Grease’ for a modern take on ‘You’re the One That I Want.’ Watch here.

that she initially struggled with making the track her own.
Artist Mentioned
Doja Cat
“I sing, but I feel like I have a lot of trouble singing certain things, even my own songs. This was one of those songs where I had to really push and find different parts of my singing ability to make it happen,” she explains.”Back then, music was so different and so carefully done. It wasn’t just loops and beats, which is why I feel like this was a bit harder for me. I can’t believe I was able to kind of hit some of those notes because it’s a very difficult song to sing. I’m happy about it.”
Checking in with Doja Cat: VMAs Host, Performer and 6-Time Nominee
Doja revealed that she also contributed to the modernized version of”You’re the One That I Want” behind the scenes.”There were some tweaks needed for the production and that all came out amazing,” she says.”I was also working with a very, very close friend of mine for the song’s production, so I’m really happy and proud of it.

It was fun laying all the harmonies and all of those came out really nicely.”
In the commercial, Doja is surrounded by Rydell High alumni. Gone are the Pink Ladies of the past — Doja’s new girls wear shades of bright pink, a possible nod to her second studio album,
Hot Pink
. Across the parking lot, Doja spots the T-Birds’ leader cracking open a can of Pepsi and becomes filled with desire. After losing sight of her love interest, Doja heads to the bleachers to track down her man and fails. She later goes to the soda shop and captures her guy’s attention after switching to a studded leather jack and pants, signifying her transition into”bad” Sandy. Doja doesn’t want to be with him, though — by the end of the TV spot, she takes his soda and leaves.
“I just remember seeing that Sandy as a kid and that just basically defining my existence, so in that moment, I was like, ‘I need to be here [doing the commercial],'” Doja tells
Billboard

Dan Osborne cosies up to kids amid marriage drama with his...

“Why can you get fined for dropping a cigarette on the...

‘Call Me By Your Name’ Filmmaker Luca Guadagnino Will Direct a...