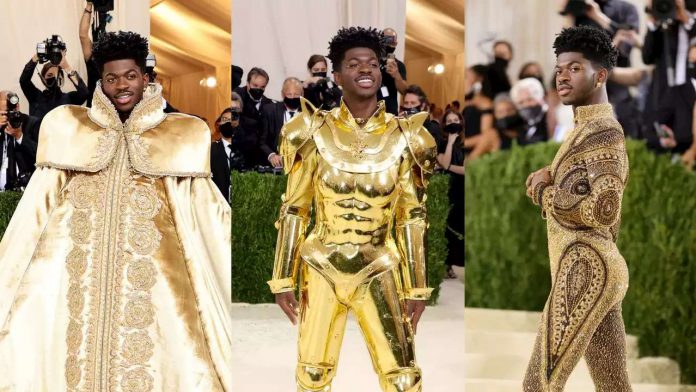 Met Gala 2021
, he put on a show. On September 13, the rapper arrived draped in an oversized silk robe that looked fit for royalty. As he made his way to the white carpet two men dramatically ripped off his cape to reveal gold body armor with an in-built six-pack. Fans only had a few seconds to pick up their jaws before he stepped out of his gold ensemble to reveal a metallic Versace bodysuit that fit him like a glove.
Lil Nas X brings an element of performance to everything he does and that’s exactly what made him one of the Met Gala’s most highly-anticipated guests this year. However, we can’t forget who did it first. Back in 2019,
Lady Gaga went the extra mile and gave us a look in four parts
.

She arrived at the Met Gala wearing an opulent fuschia cape, only to reveal a black ball gown which hid a slinky pink dress underneath. Her final look was nothing but a set of underwear, tights, and a killer pair of heels. Gaga was the blueprint and Lil Nas X was the ultimate celebrity to bring the art of surprise back.
He has always used fashion to push boundaries and the Met Gala was no exception. Unsurprisingly, social media was filled with awe. “
” tweeted one user. “We only get one chance to do it,” he told
Vogue
host Keke Palmer during his white carpet interview. We couldn’t agree more.
Check out Lil Nas X’s three looks below:
Dimitrios Kambouris

Lara Dutta and Prateik Babbar to Star in Casual’ Remake for...

Bollywood 101 10 Hindi Films to Watch in Celebration of India’s...

Gloria Vanderbilt’s Will Reveals Anderson Cooper Gets Bulk of Fortune