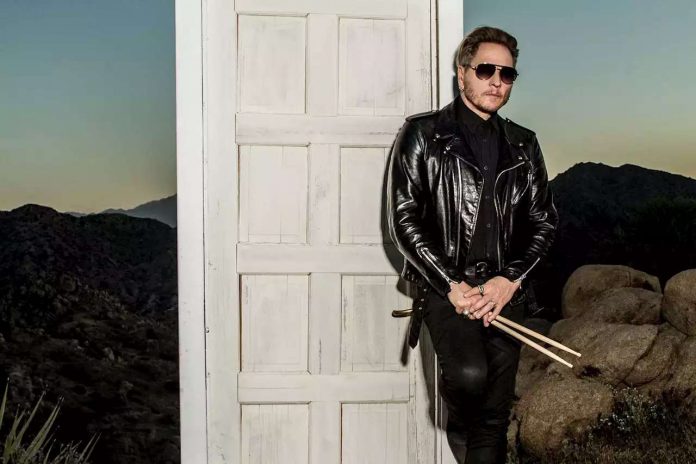 You write about the early rehearsals for
Use Your Illusion
and how you were shocked that the songs were so long. Do you think it would have worked better as a single record with all the best songs on it, rather than two records?
I think that was the intention going in. But when Axl came in and decided it should be a double record, it was a genius moment for him. I remember we’re at the studios and there was this electric door, almost like
Star Trek
; you’d push a button and it would open. Axl came in, and I feel like he had a couple of girls with him at the time. We were all sitting there and recording. He announced to us that he wanted to put out a double record.
He basically said, “I want to put out all the songs.” At that point, we were up to about 32. In our mind, we were going to cut 20 and put the best 12 or 13 onto a great record. That was going to be the next offering of Guns N’ Roses. He came up with the idea of doing two and changing the color of each and calling it the same,
Use Your Illusion I
and
Use Your Illusion II.
I was like, “Why? Why do you we have to make them separate records?” He had worked at Tower Records on Sunset. In those days, if you had a double record, you had to put it behind the cash register. It was over 20 bucks. He wanted the records to be in the bin where you could actually hold them, pick them up.
I think the main thing was that we had a lot of touring. He was like, “I want to do five years on the road. These two records are going to be the legs for that tour.”
Speaking of that tour, you talk about how much money was burned every night on that tour with elaborate parties with ice statues and whatnot. Did everyone in the band fully realize that every cent of those things was coming from your own pockets?
Yeah. We did. Everybody knew what was going on. It was excess to the highest level. In Axl’s mind, he wanted everything to be bigger than life. He wanted us to act accordingly. “When we’re playing a stadium show, why don’t we have a party backstage like the Rolling Stones? Why isn’t it bigger than life? We don’t we bring in a horn section and background singers? We need more pyro.”
The guests that we would invite onstage … Brian May, Elton … it was all these people. Axl thought by rubbing elbows with these icons, it put us in the same light as them. I understood that later on.
You talk about Izzy Stradlin’s departure and what a problem that was since he wrote so many of the songs. Do you think his absence is a big reason why Guns N’ Roses have made just one album in the past 30 years?
I can’t say. Obviously, when I came into the band, there was four original guys. After we went out and became so big, the machine kind of took over. Obviously, we all made decisions that weren’t completely clear in our minds based on alcohol and drugs. If anyone was clean, it was Axl. He was always accused of being a worse drug addict than he was. He was actually just trying to steer the ship.
Slash was very much the bandleader for the band guys. He was like, “If you’re going to party until 6 a.m., you have to be at rehearsal at noon. Don’t miss soundcheck.” A couple of times, the wheels came off for me. I started fucking up too. It was just so much craziness going on. You just fell into it. It was part of the time. It was part of the makeup of the band and everything that was around it.
As far as when Izzy left, I just don’t think he could be around it anymore at that level. It becomes this crazy rollercoaster ride that you really couldn’t get off. It almost felt uncontrollable. There was a
Rolling Stone
cover that just said, “Guns N’ Roses Outta Control.” That’s kind of how it felt at the time. I wasn’t the decision maker in that band. I was just sort of on this wild ride.
The follow-up album you guys tried to make in the mid-Nineties was clearly destined to fail. Everyone was on a different page musically and the resentments had piled up too high.

Emily Ratajkowski Takes a “Midriff Floss” Bikini To the Beach

Coronavirus How much do children spread it?