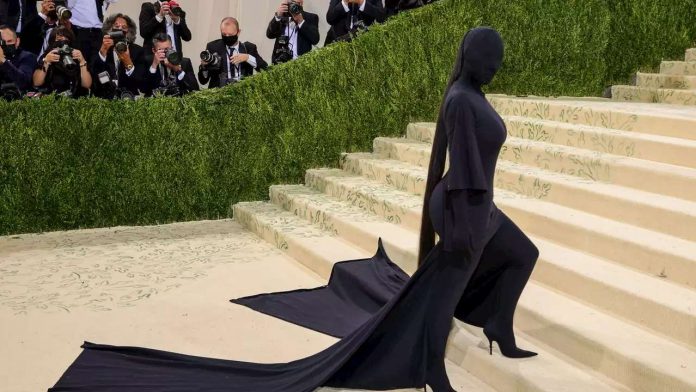 Kim Kardashian
takes her Met Gala fashion seriously. The reality star has consistently gone the extra mile with her choices, since she first stepped on the red carpet in the now iconic floral print Givenchy maternity dress in 2013. Given that, and her most recent wet-look raindrop gown that pulled Thierry Mugler out of retirement in 2019, the bar was set high for tonight’s affair.
Red carpets are all about celebrities putting their best face forward, but what happens when you can’t see their face at all? Kardashian’s stark black Balenciaga haute couture gown with matching mask and train was unlike anything Kardashian—or anyone else—has worn to the Met before.

Completely obscuring her features and famous physique, the look gave the reality star something she hasn’t had in a long while: anonymity.
Entering the gala with Balenciaga designer Demna Gvasalia on her arm—and in a matching ensemble featuring a black-out hoodie—Kardashian kept the entire crowd guessing. Granted, her sister Kendall was close by, which offered onlookers a hint, but the outfit and its mysterious aura gave the crowd something new and inventive.
Topics

Luminous Pearl Accessories to Add an Air of Elegance to Any...

Inside Duchess Meghan’s Launch of Archewell and Why She’s Speaking Out...