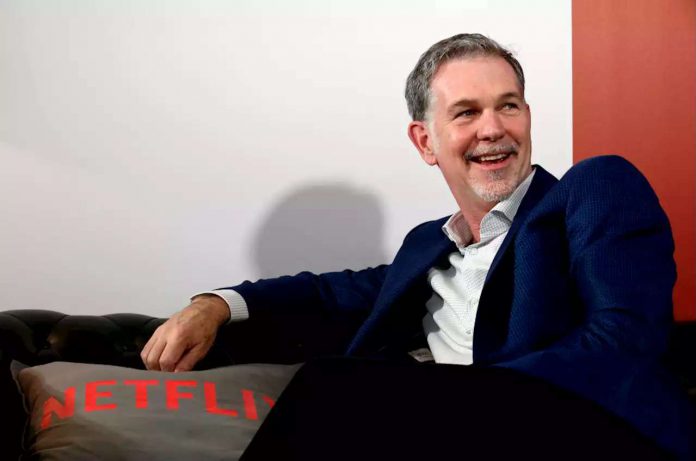 Netflix CEO Reed Hastings was in Berlin this morning to open the streamer’s new DACH Headquarters (Germany, Austria and Switzerland). Greeting a room of executives and content creators – incl…

Munich – The Edge of War
) and Edward Berger (
All Quiet on the Western Front
) – the Netflix chief talked up the performance of German content on the service to date.
“The success around the world of German content is really incredible,” he commented without drawing on specific examples. A VT played before his speech features titles such as
Dark, How To Sell Drugs Online (Fast)
, and historical epic
.
Related Story
“Producing content that Germans thrive on and spread around the world is such an opportunity,” Hasting continued, adding that the international proliferation of local language content continued to be “the really special thing about Netflix”.
Watch on Deadline
Quizzed about his view on increasing competition in the streaming space, the CEO remained sanguine about other companies’ aggressive moves into the market. “There’s nothing we can do about the competition, it exists, which is great for consumers,” he said. “All we can do is make the best series and films we possibly can. Then people can decide how much they want to view.”
As the market grows and viewers are increasingly spoiled for choice, Hastings said he wasn’t concerned by numbers, despite the company ramping up production in all four corners of the globe.

“We’re not obsessed by volume. It’s who do we want to work with, how do we tell a story?” He explained. “You have to provide variety, nobody wants to see the same thing again and again. We want to provide escape, stimulation, something that brightens your day.”
Hastings is in the middle of a European tour, having jetted in from Netflix’s Turkish office, before heading off to India next, where the streamer is making a sizeable push into a rapidly growing market.
While in Germany, Hastings did take the opportunity to visit the set of one of the streamer’s productions, he noted,
1899
, the ambitious new project from
Dark
creators Baran bo Odar and Jantje Friese.
As
Deadline
has covered previously, the show is utilizing a purpose-built virtual production stage that employs state-of-the-art technology to replace the need for green screen. Read more about it in our feature
here
.
Hastings hailed the show as a new benchmark for series production. “Right now, the most advanced production technology in the world is here [in Berlin for
1899
], it’s really cutting edge and amazing.”
Subscribe to
and keep your inbox happy.
Read More About:

Carole Baskin Takes Tumble Outside DWTS Studio- Is She Okay?