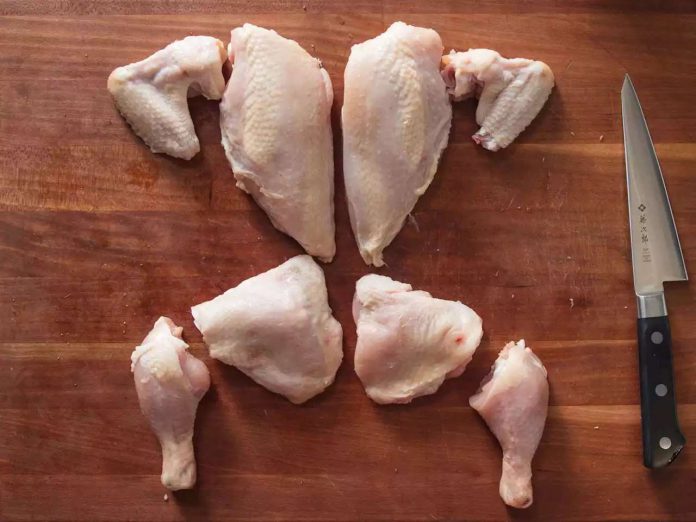 A Japanese poultry knife deserves a place in any dedicated cook’s knife set.

will do in a pinch.
So if there’s so little cutting involved in breaking down a chicken, then why buy a
knife
cutting up
chickens?
My argument is twofold: Buy a honesuki because it’s a pleasure to use and because it both rewards and demands good technique.
The first one is self-explanatory. While unitaskers get a bad rap because they can only do one thing, there’s something to be said for a tool whose sole purpose is to execute a single task better than any other. And the honesuki truly excels at taking apart birds! Something about the knife’s design makes it entirely intuitive to use; you’re able to make precise cuts from a variety of angles, due to its small size, and it comes to feel as if it’s a natural extension of your hand.
The second argument is a little more nuanced. First of all, the fact that you own a poultry knife means you’re committed to buying whole birds and taking them apart, which is a very good habit! Second, the pleasure of using a honesuki is directly correlated to how sharp you keep it, so you have to be comfortable with sharpening the blade, lest it be utterly useless.*
*On the one hand, this may sound arduous, since sharpening knives isn’t as common a skill for home cooks as it should be (
it’s really easy!
); on the other hand, because a poultry knife does very little heavy cutting, it doesn’t need to be sharpened as frequently as general-purpose kitchen knives or even other task-specific knives like a deba, a fish butchering knife.
Finally, the honesuki is terrible at tasks it’s not designed for, so it forces you to do things correctly. The best examples I have for this are the joint that connects the drumstick to the thigh and the joints between the wing’s drummette, flat, and tip: All of these joints can be separated using brute force, by pushing a knife blade through the connecting cartilage.

The tip of the honesuki isn’t really designed to do that (although the heavy heel can be used to cut through cartilage), so it’s far easier to take the time to cut away skin and flesh and expose the joint so you can slide the point of the knife between the bones.
There are some tasks that a honesuki makes even easier, like deboning legs and thighs. And, of course, the honesuki really shines when it comes to fussier work, such as butterflying wing flats or shaving the skin off areas of the back, like the bit just beneath the oyster, which, when removed with the oyster, can be wrapped around the morsel of meat, skewered, and then broiled or grilled to make one of the tastiest bits of chicken in the world.
Finally, since the knife is designed for poultry, it will obviously work for duck, turkey, quail, or other birds. But that sharp, thin knifepoint is great for a lot of small meat-butchering tasks, like cutting a rack of lamb into chops or splitting up a rack of ribs, and that heel is good for
Frenching
the bones, too.
At home, I use a Fujiwara blade that isn’t a true honesuki—instead of a single bevel, it has an asymmetric bevel, which I chose because, at the time, I wasn’t quite comfortable with the idea of sharpening a single-bevel blade. I’ve since used the single-bevel Tojiro DP honesuki we have in the test kitchen many times, and I can recommend both, both as a gift to buy for yourself this holiday season or as a gift for anyone you know who cooks a fair amount of chicken and likes to use beautifully designed tools.
Featured Video

Must Read ‘Anti-Viral-Leisure’ Could Be a 20 Billion Opportunity This Is...

Put On A Face Mask So I Know It’s Real