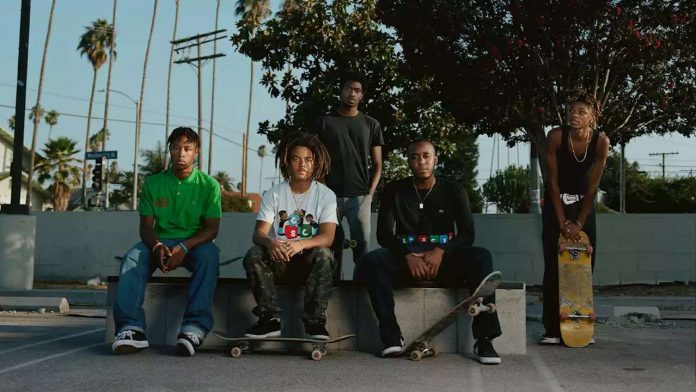 Robert Cordero
September 20, 2021 04:30
Last week, Tobias “Tobey CSC” McIntosh arrived at Stanford, one of America’s top universities. Along with a 4.8 grade point average, the 18-year-old valedictorian from Crenshaw, a predominantly Black inner-city district in South Los Angeles, has something that sets him apart from his peers: he’s a budding fashion entrepreneur.
In the last four years, McIntosh has turned Crenshaw Skate Club, a streetwear business he started when he was just 14, into a small but fast-growing skater brand with fans like Justin Bieber and Supreme, which stocks the label in its LA store.
The rise of Crenshaw Skate Club speaks to just how much the American fashion landscape has shifted in recent years, as labels selling simple T-shirts and hoodies, imbued with street cred and a sense of community, rival designer brands for fashionability. And lower barriers to entry — a wider set of upstarts can silkscreen T-shirts and sell them online than launch designer labels — mean budding fashion entrepreneurs now come from once unlikely places.
Crenshaw’s rough if rapidly gentrifying streets were famously depicted in John Singleton’s coming of age in the ghetto drama “Boyz in the Hood” and the songs of slain rapper Nipsey Hussle. The neighbourhood isn’t exactly a feeder for Stanford. Or, a hotbed of skateboarding. On the streets of South Los Angeles, it’s still basketball that reigns. Skateboarding is still more closely associated with white kids.
“If I think of a kid from Crenshaw, one of the first things that comes to mind is not going to be a kid on a skateboard,” says Chris “Spanto” Printup, the founder of LA streetwear label Born x Raised. “I thought it was very brave and very bold of him to just even call it Crenshaw Skate Club. I’m sure there’s a lot of people from Crenshaw that said: ‘Yo that’s not what we’re about over here.’”
Tobias McIntosh says Crenshaw Skate Club has “exponentially grown” the past year and a half with the bulk of revenue coming from direct-to-consumer sales. Tim Hans for BoF.
But these days, the LA skate scene is
giving birth to more diverse crews
. And the dreadlocked McIntosh says he launched Crenshaw Skate Club precisely because he did not see himself and his friends in most skate videos and magazines. “What I wanted to do was create something that represented me and my friends in the skate industry,” says McIntosh, who started skating when he was 12 years old after Spoety, one of the workers he befriended at Supreme’s store in Fairfax, gave him one of his first boards. “Also, growing up in Crenshaw, in the inner city, there’s a lot of negative activities that you could get into as a kid.

I felt that skating is a positive outlet for my friends’ time and could keep them from getting into trouble in the streets.”
This summer, Crenshaw Skate Club hired its first full-time employees. It also expanded its product assortment from T-shirts ($30) and hoodies ($72) to socks, sweaters, hats, pins and skateboards. In July, on the back of buzzy collaborations with top LA streetwear labels BornxRaised, The Hundreds and Carrots, Crenshaw Skate Club launched a line of polo shirts with French megabrand Lacoste.
Collaborations are “how you show your worth and that you are leveling up,” says Printup. McIntosh declined to reveal sales figures, but says the label has “exponentially grown” the past year and a half with the bulk of revenue coming from direct-to-consumer sales.
Although McIntosh says he took business calls during lunch breaks from high school and sometimes stayed up until 3am working on his brand, he maintains that, these days, “it isn’t hard to start a brand.” The tools are there, he explains, pointing to Instagram and e-commerce platforms like Big Cartel. “The hardest part is to not give up.”
In his first month in business, McIntosh did not sell a single T-shirt. But instead of feeling defeated, he hit the streets, foregoing traditional marketing channels in favour of guerilla tactics common to the skate community, like handing out stickers in Fairfax, a busy shopping district in Los Angeles. “I think there’s such a strong core to my brand because I establish direct relationships with people,” he says. “If people only see your brand on a computer screen or an ad, that’s not real.”
“My ambition is to empower inner-city skaters all around the world,” says Crenshaw Skate Club founder Tobias McIntosh. Tim Hans for BoF.
Another key to Crenshaw Skate Club’s success is a sense of place. “Streetwear without having roots and ties and a story about where you come from, it’s just a trend,” says Printup. “I think of brand owners like rappers. We give you the play-by-play and the story of our neighbourhood. And a lot of us grow up in poor, impoverished areas.”
For too long, the youth in places like Crenshaw have seen few pathways to a better life. McIntosh hopes Crenshaw Skate Club can help to change that.
“My ambition is to empower inner-city skaters all around the world,” says McIntosh. “They don’t just have to play basketball or rap or sell drugs. They don’t have to do that. I want to show people in my community that they can do whatever they want.”
Related Articles:

A Photo of Nicole Kidman at Keith Urbanu2019s Benefit Concert Has...