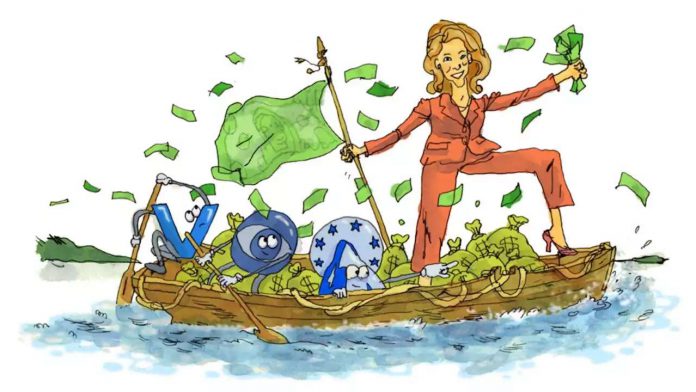 The all-in Paramount+ effort is an uphill climb, but some finance insiders are becoming less skeptical of the media giant as a buyer rather than acquisition target.

“Change That Is Long Overdue”: Why IATSE May Call for a Strike
“Historically, we have been bears and saw streaming as a show-me story,” Cahall admitted. “They’ve shown us!” By the end of 2022, he forecasts 70 million subscription VOD subscribers and 147 million subscription VOD and advertising VOD subscribers with around $8 billion in streaming revenue. “This is a stronger start than we expected and already makes the recent long-term guidance appear beatable,” Cahall concluded. But he also warned: “We expect ViacomCBS to hit or exceed our key estimates, and if that falters, our Hulu-style valuation is overly generous.”

The recent leadership change at Paramount — swapping veteran film executive Jim Gianopulos for Nickelodeon chief Brian Robbins —was seen as a sign of the company’s new aims. “There has been a wholesale pivot of virtually every major and independent studio and media aggregator to put their entire weight … behind each company’s streaming effort. It has become the singular objective,” Moody’s analyst Neil Begley says. Robbins’ “experience in digital, as well as his experience running Nickelodeon may present a greater opportunity,” he argues.

ViacomCBS CFO Naveen Chopra all but confirmed that the rationale behind the reshuffle was the change the industry continues to go through in the digital age. “To successfully navigate that change, you have to figure out how to leverage the benefits of the traditional parts of the business, including theatrical distribution, while also aggressively embracing streaming and changes in consumer behavior,” he said. “Similarly the transition of Paramount TV going to David Nevins I think will be a very accretive move.”

ViacomCBS CEO Bob Bakish and Redstone also have used dealmaking in the hunt for streaming growth. The company struck a joint venture with Comcast’s Sky to roll out a joint streaming service dubbed SkyShowtime in more than 20 smaller European markets. “ViacomCBS has made some notable strategic and operating strides since the merger” that closed in December 2019, CFRA Research analyst Tuna Amobi says, with a caveat that “there are still pockets of lingering skepticism in the investment community as to whether the combined company has amassed a scale that is sufficient” against streaming giants like Netflix or Disney.
Given the money and energy the conglomerate is spending on growing its streaming business — ViacomCBS unveiled a $10 a month Paramount+ and Showtime bundle on Sept. 21 — expanding through further acquisitions could make sense, some believe.

Indeed, ViacomCBS has recently been mentioned as a potential suitor of smaller takeover targets in the entertainment space such as AMC Networks, whose premium content hits like The Walking Dead are seen as appealing to anyone with an appetite for a deeper streaming library. (AMC also recently tapped former Showtime chief Matt Blank as its interim CEO following the planned retirement of Josh Sapan, raising speculation that the Dolan family may have tapped him to find a buyer for the niche programmer.)
Others see ViacomCBS as an attractive takeover target. Cahall wrote that it is “quite possibly the new belle at the ball” that is media M&A. Citing the planned Amazon deal for MGM, reports that Apple looked at Hello Sunshine before it sold to the company of former Disney executives Kevin Mayer and Tom Staggs, and the fact that Discovery struck its big deal for WarnerMedia “and says it won’t be done there,” the analyst argued: “Media consolidation is happening with a focus on aggregation. We see content capabilities like ViacomCBS’ studios as among the rarest gems.” Peter Csathy, chairman of advisory firm CreaTV Media, lauds ViacomCBS for its “content scale,” adding, “And that’s what the big tech streamers want.”
But who is buying? While Amazon has agreed to buy MGM, one banker notes that Facebook, Apple and Alphabet have not shown much appetite for huge Hollywood buys so far.
Comcast has been the most widely rumored deal partner for ViacomCBS. Yet RBC Capital Markets analyst Kutgun Maral suggested in a recent report that their European streaming venture may mean the companies are happy to focus on streaming growth and punting on any major M&A.
“This partnership allows each company to peek into a streaming opportunity under a service backed with far greater resources,” Maral wrote, but noted: “It’s still unclear to us if SkyShowtime is a precursor or a substitute to a larger combination.”

Some say though that investors should focus less on deals and more on how well management maximizes the streaming opportunity, which would benefit ViacomCBS whether it keeps going it alone or eventually agrees to an acquisition or sale. Former Wall Street analyst Hal Vogel adds that “there seems to be no rush” to make any M&A calls one way or another, arguing ViacomCBS management may just “wait a while to see how the streaming wars shake out.”
A version of this story first appeared in the Sept. 22 issue of The Hollywood Reporter magazine.

Brielle Biermann Is Making This the Accessory of the Summer