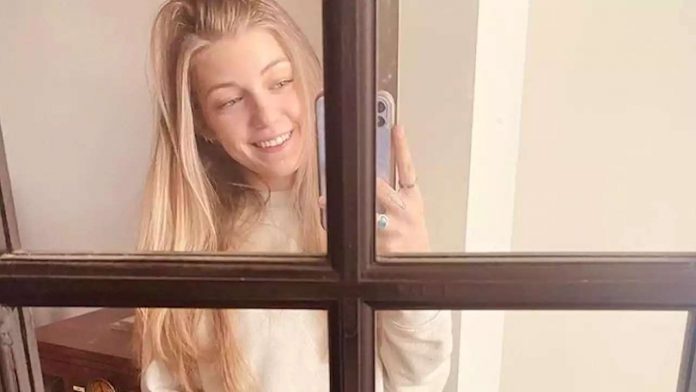 Initial reports indicate her death may have been a homicide.

USA Today
, the couple had been living with Laundrie’s parents in Florida after moving from Blue Point, New York. They were reportedly childhood sweethearts.
“After our first cross country trip in a little Nissan Sentra, we both decided we to wanted downsize our lives and travel full time,” Petito
wrote in the caption of a video blog
posted to YouTube in July. The video documented the “beginning of our van life journey,” showing the two kissing, camping, running on the beach, and other idyllic scenes. The couple talk about sleeping in their tent and show their daily routines.
The two posted extensively on social media about their trip, and had started a website (which is currently password protected) to document their travels.
According to police, Petito had stayed in regular contact with her family until the end of August, when she abruptly stopped communicating with them.
Petito and Laundrie are stopped by police after having a physical altercation
On August 12, a
USA Today
shows the couple was pulled over by police in Moab, Utah, after they had a fight outside a local store. According to the police report, witnesses saw Petito and Laundrie fighting. When they were pulled over after driving away from the scene of the fight, Petito told police that she was struggling with her mental health, which had caused her and Laundrie to have arguments all day. Laundrie said he and Petito both have similar mental health issues, and that tension had been rising between them.

After an argument, Laundrie said Petito tried to slap him, and he pushed her away as a result. Laundrie told police, according to the report, that Petito was scared he was going to leave her in Utah without a ride.
According to the report, police mediated the situation, and Laundrie and Petito agreed to spend the night apart — her in the van and Laundrie in a hotel room police helped him find. Throughout their encounter with the couple, police wrote in the report that Petito did not stop crying.
Body camera footage
released by Moab police on September 16 shows a distressed Petito talking about her efforts to start a blog, and her mental health strains. “We’ve just been fighting all morning,” a tearful Petito told officers.
In their report, police wrote that neither Petito nor Laundrie wanted the other charged with a crime, noting that they love each other. Police concluded it seemed less like a case of assault than a “mental health crisis.”
Petito stops communicating with her family and Laundrie returns home
Around the end of August, police said Petito’s family stopped hearing from her. Their last communication was on August 30, but their attorney said in a news conference according to
CNN
that they don’t believe the messages were from Petito. He didn’t share why they don’t think the messages came directly from her.
Before she stopped communicating with her family, Petito was believed to be in Grand Teton National Park in Wyoming, police

D A Could Reportedly Charge Tory Lanez With Assault Over Megan...