Home Woman In London Space for the Next Generation 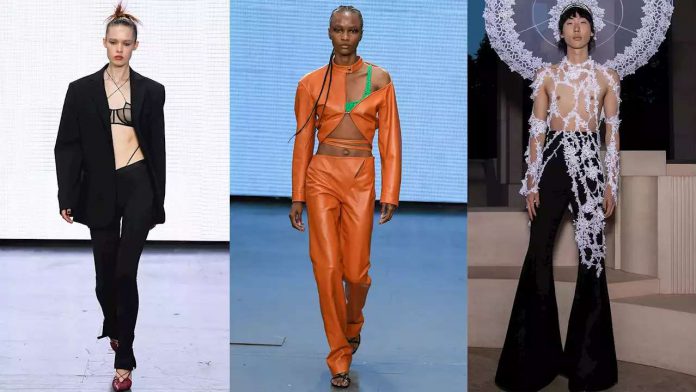 Nensi Dojaka, Supriya Lele and Harris Reed were among the upstarts that popped during London Fashion Week, but it was more experienced hands like Simone Rocha who truly triumphed.

Susanna Lau
September 22, 2021 00:15
LONDON — Could London Fashion Week hold its own without relying on the heft of Burberry and the star-power of Victoria Beckham? With both labels off the schedule, a question mark hung over the return of physical shows in the British capital this week.
But for those who remember the thrills of thronging to get into hot-ticket debuts like Gareth Pugh or Christopher Kane back in the mid-noughties, the real draw of London has always been emerging talent. And as the city’s flagship houses continue to experiment with how and when to show new collections, there was more space for the next generation to show up and step up.
It was a heavy mantle to carry.
The TikTok-sponsored space at the Old Selfridges Hotel was the primary hub of activity, playing host to many of the beneficiaries of the British Fashion Council’s New Gen funding and mentoring initiative. But poorly lit and punctuated by large video screens, the space was a rigid and somewhat uninspiring stage for showcasing young talent. Yuhan Wang’s ruffled feminine confections, which delighted on film during lockdown, lost some of their insouciant lightness to the space. The location was equally tough on Eftychia Karamolegkou, who made a curious decision to stray from her directional tailoring in favour of Y2K-esque separates.
One designer who popped despite the space was Nensi Dojaka, whose debut solo show became one of the most hotly anticipated of the week after she
. There’s a savviness to the way Dojaka has laid claim to baring skin intelligently. On show were Dojaka’s trademark lingerie-inspired constructions and fabric suspensions worked into bodies and mini-dresses alongside tailoring and high-waisted trousers. They filled out a
garde robe
in black, brown and dusty pink, but skin was still very much on the mind, and right on cue to tap a
major post-pandemic trend
. “I want to make more of a wardrobe that we can sell,” said Dojaka.
As in New York last week, hot-to-trot sexy girls were everywhere in London. They were running around in smoking cowgirl attire at designer Charlotte Knowles’ line, rebranded Knwls. Supriya Lele also bared all, in part by dropping the hips with deconstructed sari wrap skirts inspired by her Indian heritage. But it was the fit-as-fuck girl of hot summer dreams that prevailed. And Lele will do well with her nineties/noughties, ruched hole halters, skimpy dresses and tight jersey pieces.
Sex certainly sells. But these days it’s increasingly about embracing a greater diversity of bodies. See the well-rounded casting at Rejina Pyo where bodily curves bounced (as did a trio of divers plunging from platforms at the London Aquatics Centre at the edge of the city) making the clothes even more convincing.
Clever venue choices served some particularly well. Set against Raphael’s Cartoons at the Victoria & Albert Museum, Richard Malone, with the help of a Mulberry collaboration, showed why his fusing of sustainable fabric sourcing with high octane made-to-measure pieces, draped and ruched to precision is paying off. The saturated tones of reds, blues and greens in largely monochromatic sculptural ensembles stood up to the Renaissance paintings, making a vivid impact.
A few designers deviated from the traditional catwalk format after a year of experimenting with new ways to present their work, opting for performance pieces, films or low-key appointments. Roksanda Ilinčić collaborated with Holly Blakey on a Pina Bausch-inspired dance piece featuring performers wearing extreme iterations of Ilinčić’s bold colour palette and textural experimentations, with boning used to create bouncing volumes fit for movement. After a year and a half of padding around in comfort dressing, Ilinčić was keen to show that “there’s light at the end of the tunnel.”
Dance was also on Michael Halpern’s mind as he once again focused on those hit hard by the pandemic, this season the Royal Ballet dancers who have only just begun to perform for live audiences again. Presented via film, his bubble frou frou frocks and colour blocked fringing made for a moment of digital fun. Elsewhere,
Han Choong of Self Portrai
t, who said he pulled back from staging a show due to logistical challenges, made a case for candy-coated coltish femininity, rendered in cute separates, while Matty Bovan presented his patchworked crochet assemblages with a trippy film by Ruth Hogben.
If alumni of longstanding London incubator Fashion East dominated the London schedule, Fashion East’s own show at the Institute of Contemporary Arts (ICA), was a more streamlined affair. With Goom Heo and accessories label HRH presenting digitally, and Jawara Alleyne showing his draped, Caribbean-inspired pieces in a compact atrium, this season’s show featured two designers: Chet Lo and
Maximillian
. Lo, an Asian-American knitwear whiz brought his “durian” spiky machine knit technique to tropical two-tone heights, looking almost good enough to eat or drink. But it was Maximillian’s sinuous scuba-esque bodylines that were the biggest hit, echoing the sex quotient that’s clearly on the agenda for Spring/Summer 2022 but in a way that felt potent when rendered in translucent fabrics and harlequin printed silks.

The frisson of a future Fashion East alumni success story was very much in the air.
Harking back to the days before London launched a menswear week, when the city’s womenswear shows had a menswear day appended to the end, men’s designers were once again in the mix with their womenswear peers this season. Saul Nash took us back to P.E. class, school changing rooms and “cotching” (Londoners will know) at the bus stop with riffs on sportswear and modular pieces that unzipped and unfurled convincingly. S.S. Daley designed by Steven Stoke Daley, a fresh graduate, staged a truncated play centred around a critique of the British school system. “Race, class privilege. Which comes first?” yelled one of the National Youth Theatre actors trussed up in Etonian garb. It was a blend of Dead Poets Society, History Boys and Brideshead Revisited that held charm, especially when pieces looked visibly upcycled. Stefan Cooke also questioned Britishness, specifically the British High Street and its heyday, now in tatters after the economic devastation of the pandemic. High street honeys or hunks? A bit of both that will chime with a generation of Depop users hunting out Y2K, FCUK and Miss Selfridge looks. Are we ready to go clubbing again? The mayor of London, Sadiq Khan, was up for watching menswear designer Charles Jeffrey in a standing-room-only show of dystopian theatrics set in a steamy nightclub.
Spring/Summer 2022 looks from Simone Rocha and Erdem. Courtesy.
Where London Fashion Week truly shone, however, was with designers that had more years of experience under their belt.
Simone Rocha has notched up a decade
in business, a milestone feted by key stockist Dover Street Market earlier in the week, and crowned the achievement with a stunning collection that the designer created in the heady haze of sleepless nights and tides of maternal love, having had a second child earlier this year. You could see the hand of confidence in the clothes, which were utterly true to Rocha. But even though Rocha had to contend with sleepless new-mum nights, she managed to push herself to new heights. The volumes grew over the course of the show, which featured crinoline skirts, coats with bed ruffles, nursing bras and tops laden with embellishment (sign this writer up should she run the motherhood gauntlet again), patent boots and jackets dripping in blood-red and sugary almond, a colour that looked fit for a nursery. Every ensemble felt like a labour of love, a new birthing of sorts, christened in the eerie glow of St Bartholomew’s church. “There’s this physicality of being a new mum that I channelled into the collection,” said Rocha. “There’s this friction during motherhood that is challenging.” And indeed the conflicting feelings of frustration and love that come with having a child were so stupendously articulated that this writer was literally moved to tears.
Molly Goddard’s latest collection also ruminated on new motherhood (the designer is currently on maternity leave). The pieces were pared-back for a designer known for her voluminous tulle frocks. But there was something refreshingly insouciant about boyish jeans and an organdie pink smock. Between the lines, the designer hinted at her desire to show again in a bigger way — no doubt a sign of things to come next season.
Like Rocha, designer Erdem Moralıoğlu also celebrated a major anniversary this season (for Moralıoğlu, it’s 15 years in business). Under the imposing columns of the British Museum, he paid homage to Edith Sitwell and Ottoline Morrell: more eccentric ladies of yesteryear in elegant off-kilter frocks. Like Rocha, Moralıoğlu has always been true to himself, refining a consistent vision. With a double rainbow completing the pretty picture, it was clear signature style still goes a long way. (Simone Rocha and Erdem were the only shows attended by
Vogue
chief Anna Wintour).
The last day of London Fashion Week began with a bomb — a flower bomb, that is. In the basement of the newly opened Londoner hotel, Richard Quinn’s floral explosion contrasted with the polythene covered floor. Quinn was feeling the tension of lockdown and it showed in his tautly pulled monochromatic columns and heightened shoulders. It’s a shame that the outing will inevitably be compared to Demna Gvasalia’s Balenciaga, such is the short-term memory of internet commenters, who may not remember that Gvasalia was accused of referencing Quinn once upon a time!
It’s ironic that one of the most-buzzed about designers of the week wasn’t on the official schedule, but nonetheless providing a compelling coda to London Fashion Week. Harris Reed, whose extraordinary path from Central Saint Martins BA graduate to dressing Iman at the Met Gala and nabbing

Selling Sunset’s Maya Vander I Refused to Film at the Start...

Dear God This Viral Marriage Proposal Is The Literal Worst And...