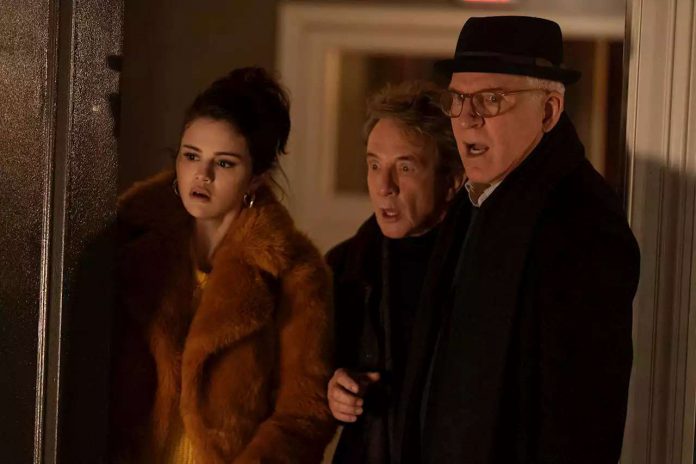 , and then when I discovered
My Favorite Murder
Crime Junkie
, and it was about sort of fans that were making podcasts about this.”
In the show, the famous podcast that draws the protagonists to each other in their shared obsession,
All is Not OK In Oklahoma,
is hosted by Cinda Canning, played by Tina Fey, whose sonorous public-radio cadence immediately calls to mind
Serial
host Sarah Koenig. Hoffman confirms she was the inspiration. “When we were coming up with the character of Cinda Canning, I was just looking at what drew Sarah to [podcasting], and her background included, obviously,
This American Life
and journalism. But also I read some interviews where she talked about, I guess she’d done some improv and wanted to be in musical theater. So there’s a part of all of that that I think dimensionalizes these people.”
The show is resonating with real podcasters. While Koenig tells
Rolling Stone
that she hasn’t watched the show (though she has heard from friends that Fey plays a version of her) Rabia Chaudry, a lawyer who appeared in
Serial
and later went on to start her own podcast,
Undisclosed,
about wrongful convictions, says she loves how the show playfully skewers stereotypes of podcasting in general — like the struggle to get people’s consent to be recorded and using closets as studios — and true crime in particular. “It does really reflect a lot of the tropes that exist for a reason about true crime,” she says. “I’m kind of tickled that Steve Martin and Martin Short are reflecting the subculture that I’m part of. It’s helping us laugh at ourselves.”
For Charles’, Oliver’s, and Mabel’s podcast, the hosts are imitating the podcast creators they love as they plan a profile of the victim for the second episode. “Every great Episode Two always makes you care deeply for the victim,” says Short’s Oliver. “Ah that’s true,” Martin, as Charles, replies. “I’ve fallen in love with so many dead people.”
Chaudry says she looked at her own work after she watched that scene and realized it’s true — but for good reason. “The very first episode has to be about the crime itself, right?” she says. “And then once you have kind of ground zero established, you naturally move to the victim and also the victim’s last movements. You want people to care about this case and know who we’re talking about here.

It can’t just be some random person.”
Then there’s the struggle to score the podcast. In some early scenes, Martin — a longtime musician in real life — plays a concertina, pitching the old-timey accordion-meets-harmonica sound to his co-producers for the soundtrack. They reject it, but it sounds a lot like something one might hear on a podcast. “For me, it was more fun that it was annoying, and we could make jokes about it,” Hoffman says. “It was only after the fact that I realized, oh, that actually is something you would hear.”
Chaudry has had her share of musical nightmares. “Scoring can make or break the sound of a show, maybe any podcast, but certainly in true crime,” she says. “You have to get it just right. You can’t be disrespectful to the victim. You have to take that into account.”
While most of the show is a lighthearted sendup celebrating the genre, Hoffman doesn’t intend to suggest podcast listeners should mount their own investigations or publish their findings, like the characters on
Only Murders
do by putting out their podcast. “The actual process by which someone might be desperate enough to put something out is really ill advised and insensitive and also creating worlds of trouble as far as a real investigation goes,” he says, and promised the characters will confront the “comeuppance” of their own decision to do that.
Chaudry, as an attorney, agrees. “They’re breaking into the victim’s house and stealing potential evidence, and I’m like, oh my God, no! You’re ruining a crime scene, you’re destroying an actual investigation,” she says, although she gives the fictional characters some leeway she wouldn’t in real life. “On the other hand, the police are already calling it a suicide and they’ve closed the case. So I kind of go back and forth on that. But it can be very risky when you don’t have any professionals involved.”
The characters on
Only Murders
also struggle with the monetization of a tragedy in a very literal way — while grasping a $50,000 check — getting at the heart of the tension of true crime as entertainment. “Those questions have to come up over and over again,” he says, then alludes to plans for the second season. “Hopefully, we get to go bigger and bolder into those questions.”
In This Article:

The Weird and Wild Anatomy of the Netflix Original Sitcom

Kylie Jenner and Travis Scott slammed after appearing to park in...

Remembering the Oklahoma City Bombing 25 Years Later ‘We Showed the...