Home Woman This is what’s behind the success of the Bautista Family Organic Date... 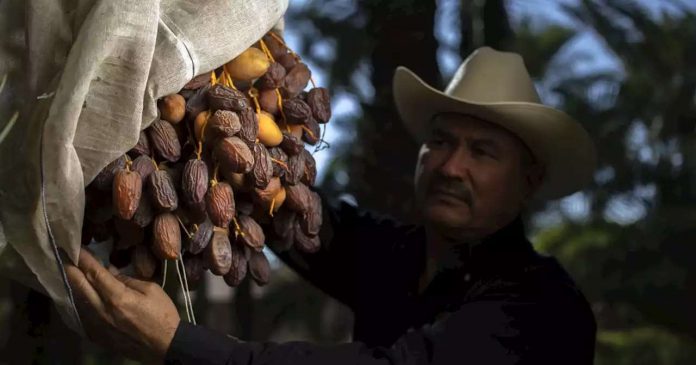 The family’s dates are praised by chefs and customers across Southern California.

Date tours, date shakes, date docs — why you need a road trip to the desert.
Advertisement
The focus of the family, of course, is on the 1,000-plus date palms — ranging in height from 30 to 60 feet — and the fruit that is praised by chefs and customers across Southern California. Each year, the trees produce 100,000 pounds of dates — Medjool, Deglet Noor, Halawy, Khadrawy, Barhi, Honey and Zahidi — with flavors ranging from wildflower honey to caramel. They’re sold online and at farmers markets including Santa Monica, Hollywood, Torrance and Studio City.
Enrique Bautista with his children, from left, Maricela, Alicia, Enrique Jr. and Alvaro, at Bautista Family Organic Dates.
(Myung J. Chun / Los Angeles Times)
“The quality … there’s really no comparison to what you’d get from a produce company,” says République chef Walter Manzke, who procures dates — when they’re in season — from the Bautistas. “Yesterday, I bought Medjools [at the Santa Monica farmers market], and we’re pairing it with cauliflower on the grill, a drizzle of olive oil, chermoula, labneh, and garnishing with their dates. There’s a touch of heat [from chile], and the rich sweetness from the dates works so well [with] it.”
Enrique Bautista and his wife, Graciela, immigrated to the Coachella Valley from Michoacán, Mexico, in the 1970s. They both had experience in farming, and in the ’90s, he became the foreman of a date farm owned by
Fred and Betty Wendler, who were both his employers and his friends. When the Wendlers decided to retire, Enrique bought the farm, and his family joined in the work.
In 2004, he was injured in a car wreck that left him in a wheelchair. At that point, his children and grandchildren took over the responsibilities of the business and kept it going, and Enrique continues to zoom around the property offering his wisdom and advice.
The business of the farm is all-consuming. For starters, dates are not easy to grow. They need to be closely monitored and require seven to nine months of intensive care. Just moving a ladder from one tree to the next can be a feat — which is why the Bautistas now use forklifts to reach the fruit on the tallest trees.

Recipes for dates and how best to cook with them
Smooth, sweet shakes, tart lemon bars, crunchy slaw and an aromatic chicken braise — these are just a few of the wonderful recipes utilizing the unique sweetness of dates.
The dates are organic, which means the Bautistas don’t use any pesticides or chemicals to keep critters at bay. And the trees need to be inspected once a year, which means maintaining paperwork (including an activity log), dealing with the California Department of Food and Agriculture and paying fees for organic certification.
During my visit, Alicia’s brother Alvaro Bautista, who runs the farmers market part of the business and works on the farm, displayed a few green dates that were two to three months away from harvest. He explained how the pollination process works and detailed the numerous ways employees try to protect the fruit while it is ripening.
Pollination, it seems, is the biggest challenge for the Bautistas. The hardest part about farming, of course, is the (extreme) climate. But pollination “needs to be done as soon as the dates start to blossom, and if we don’t get them on time, our dates will be very, very tiny,” Alicia says. (In a region with thousands of acres of date palms, tiny dates just won’t cut it.)
The Bautista farm sits on a two-lane road dotted with other date farms on the outskirts of Mecca. A long driveway unspools on one side of the property and then wraps around a complex of buildings that house offices, a packing facility and homes where some of the Bautistas live. That may seem surprising in an era when small, family-run farms are rapidly disappearing across the country, but Alicia would like to dispel that notion — at least when it comes to her own family. “We love our job,” she says. “It gives us great satisfaction to continue with what my father started — a family-owned-and-operated business.”

The Satiating Diet Is Like Keto But Safer and More Effective