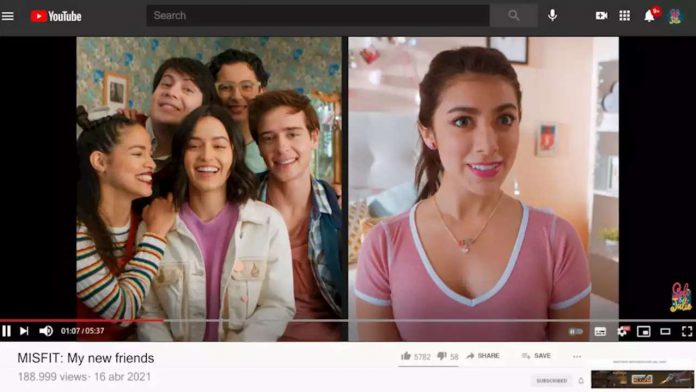 Misfit
#eresotehaces,” a Spanish-language adaptation of the popular Dutch film “Misfit,” to theaters in 10 Latin American countries on Oct. 14.
The Dutch original first hit theaters in 2017, and by year’s end was the third highest grossing Dutch film of the year, leading to two sequels and an upcoming Netflix original series. The “Misfit” franchise has now been remade in five territories, establishing it as the most remade Dutch original feature in the country’s cinematic history.
For this Spanish-language adaptation, long-time viral video powerhouse 2b, creators of the Spanish-language hit viral video platform Enchufe.tv, is making the jump to a traditional theatrical model, with longtime Enchufe.tv writer, producer and director Orlando Herrera taking the reigns as director on the ambitious new feature.
“Misfit #eresotehaces” is the story of Julia, played by Mexican actress Alicia Jaziz (Netflix’s “Ingobernable”), a Latin American teen growing up in the U.S. Not only is she popular at her school, about to be announced as Prom Queen, but she also runs a well trafficked YouTube channel. Things head south, however, when her parents decide they want to move the family back to their native Ecuador.
Once there, Alicia must start over from scratch. A new student at a tough Catholic school, she’s singled out as a “gringa,” not Latina enough after having grown up in the U.S. Shortly after her arrival, she runs afoul of “Las Reinas,” her new school’s mean girl trio who relish in bullying the newcomer. Tagged as a “misfit,” Julia’s best hope for social survival is finding a group of friends with whom she can practice strength in numbers.
Misfits #eresotehaces
Credit: 2bOriginals
As a means of establishing instant credibility with young Latin American audiences, the “Misfit” team sought out and employed production and on-screen talent from across Latin America as well as Spain, who brought with them their loyal fanbases. More than 600 actors and influencers tried out for primary and secondary roles in the film.
Leading the final cast are Jaziz, Mexico’s Gimena Gómez (“Escuela para Seductores”), Argentina’s Julián Cerati (Netflix’s “The Unremarkable Juanquini”) Spain’s Javi Luna (“Violetta”), Peru’s Raysa Ortíz (“De Vuelta al barrio”), Ecuador’s Samara Montero, Colombia’s Amy Rodríguez and Nataly Valencia and Jorgue Ulloa from Ecuador.

In total, the cast has a social media following of more than 63.4 million fans, a key factor in the casting of previous versions of the film which have been successful in other territories.
“The big challenge was to adapt the original European version to be culturally relevant in a Latin American context,” explained Herrera. “Using the universal appeal and the strengths of the original concept and giving it an authentic Latin American identity were the main objectives for the project.”
2b first acquired the Spanish-language remake rights in 2020 in a deal with the IP’s original Dutch owners NewBe and Splendid Film. When it came time for production, the production was slowed by COVID but shooting was still completed in a three-week period in Quito, Ecuador, adhering to strict health and safety protocols.
“Financing, shooting, editing and launching a movie in the middle of a pandemic has been a real challenge,” said Arturo Yepez, CEO of 2bOriginals LatAm. “For almost everyone involved in the production it was the first time in a year that they had the opportunity to work again on a movie set. Everyone worked tirelessly to ensure that we filmed in the budget and time available under unprecedented circumstances.”
“When we did the original deal with NewBe, days before the world went into lockdown, we had no idea of the obstacles ahead of us.” said Bastian Manintveld, chairman of 2bOriginals. “The end result is a testament to the talent and the passion of everyone involved in the project and we expect that audiences will have as much fun watching ‘Misfit’ as we had making it.”
“This remake takes ‘Misfit’ to a whole other level. In audience size, with a simultaneous release in so many countries, but also in target audience, humor and zeitgeist. It takes ‘Misfit’ to Latin America, but more than that, also to 2022. I’m so proud of how the great people at 2bOriginals made this work in an awesome way and can’t wait to see the response of the audience next week.” said Jeroen Koopman, founder of NewBe.
“Misfit #eresotehaces” will receive a simultaneous theatrical release on Oct. 14 in Mexico, Peru, Bolivia, Ecuador, Costa Rica, El Salvador, Guatemala, Honduras, Panama and Nicaragua before heading to streaming platforms in the region shortly thereafter.
optional screen reader

The Product Manager Who Would Sleep With Every Person in New...