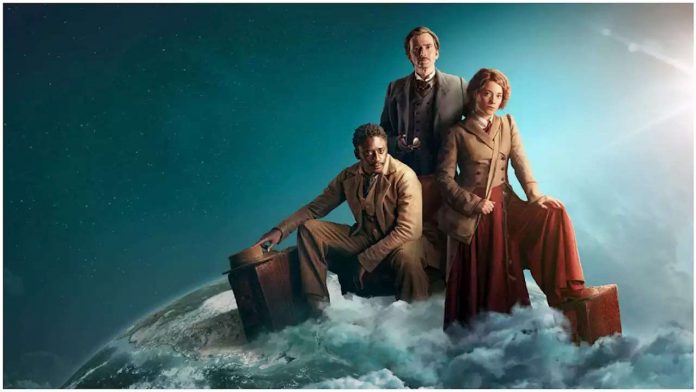 Making its world premiere on Sunday in an Out of Competition slot at Canneseries (Oct. 8-13), the French-U.K. production of “Around the World in 80 Days” has been updated for the 21st century, as l…

See All
Joe Alblas
Making its world premiere on Sunday in an Out of Competition slot at Canneseries (Oct. 8-13), the French-U.K. production of “Around the World in 80 Days” has been updated for the 21st century, as lead actor
David Tennant
(“Doctor Who”) explains.
In an interview on the Canneseries’ website, Tennant speaks with journalist Thomas Destouches about the new series, produced by Slim Film Plus Television and
Federation Entertainment
for France Télévisions, ZDF and RAI. Season 1 is composed of eight episodes of 52 minutes each.
Tennant responded to British screenwriter Ashley Pharoah (“Life on Mars”) and Caleb Ranson’s (“First Light”) update of the classic novel, written by Jules Verne.
First published in French in 1872, the original story follows an eccentric Englishman, Phileas Fogg (Tennant), who responds to a wager at his posh British Reform Club to circumnavigate the world in 80 days.
In this version, he proposes the idea himself – for undisclosed but seemingly romantic reasons – and is accompanied by a plucky female journalist, while French-Malian actor Ibrahim Koma plays the role of the valet Jean Passepartout, updating the original white male storyline. Leonie Benesch plays the newly created role of Abigail Fix, a journalist ewho rebels against writing under a male byline. In the original story, Detective Fix is a Scotland Yard detective that suspects Fogg is responsible for a bank robbery and shows up to nail him mid-journey.
The series will be broadcast on France Télévisions, ZDF, RAI and Masterpiece/PBS, which serves as a co-production partner, alongside Peu Communications (South Africa), Be-FILMS and RTBF (Belgium). Daro Film Distribution is the associate producer.
“It feels like the version of ‘Around the World in 80 Days’ for the 21st century,” says Tennant. “I had read the book, I realized, when I read the script. It is of its time. It’s wonderful but it’s probably not how you would tell the story now.”
Colonial Britain Played Forward
“I think what Ashley did with the script is that he gave it a contemporary spin without taking it out of the time from which it is set. It has things to say about us now. We look back on those times, particularly the time of Colonial Britain, with an eye that wasn’t being used at the time,” he says.
Even before Brexit, Britain looked like a peculiar place from mainland Europe.
“I do think there is something fascinating about the fact that Phileas Fogg, starting out from the Reform Club in the stuffiest corner of Old England, in a story created by a French man, that there is something about it that gives it a timelessness that perhaps it would not have had without the benefit of someone looking at it from across the English Channel,” he says.
Tennant follows in the footsteps of a string of notable actors, including David Niven and Steve Coogan, to have played the role. But this Fogg is different.
“Phileas Fogg is an interesting character in the book,” he says. “He’s very inscrutable. He’s rather aloof. He’s got a Zen-like silence about him. Nothing bothers him. Nothing ruffles him. He floats above the action, assuming that everything is going to work out, which is very different to the Phileas Fogg that Pharoah has created for this particular telling of the tale.

He’s mired in insecurity and self doubt. And I suppose that, from an acting point of view, was one of the attractions of playing someone on this journey for which he is fundamentally unsuited. And apparently incapable of achieving.”
Building Suspense
“Already, you have got a built-in tension there. Obviously, this is a story that has been told many different times, in many different ways, and I suppose that’s because it has this out-of-the-box dramatic structure,” he says. “It’s got this built in momentum. There is an actual ticking clock pursuing them around the world. You’ve got that dynamic pulsing under it the whole time, which is a great place to start. And then you go to all these exotic locations, and then you do it with people that, by definition, are out of their comfort zone. It makes sense that this is a story that we keep revisiting.”
Pharoah and Ranson had dramatic material to play with, meeting their main character on a day when everything changes on a dime.
Says Tennant: “Phileas Fogg is an unhappy man who feels that he has not fulfilled his potential, who has not lived his life, and that he has wasted his life by virtue of his privilege; he’s undoubtedly wealthy. He doesn’t have to do anything. Therefore he doesn’t. He just goes to his same stuffy club every day. He eats roasted meat. He will no doubt be hustled into an early grave with gout.”
Cross Channel Ferries
He continues: “So something snaps. We meet him on a day when a number of events occur all at once. Because of that, he’s propelled onto this journey that, otherwise, this human being would never have made. That is dramatically interesting to meet someone in that moment of crisis, especially that he didn’t see coming – that when he wakes up that morning, by that evening he will be on a boat to France. This version of Phileas Fogg has only ever been as far as Edinburgh.”
Tennant refers to the updates. “It seems almost an obvious thing to do to make one of our main characters female, it seems rather regressive not to,” says Tennant. “What I think Ashley has done is that he’s not denied the fact that it’s unusual, because it is still set when the novel is set. So to have a woman traveling around and writing about this journey for The Daily Telegraph is unusual, but that becomes part of the journey in itself.”
An Exploration of Race and Sexual Politics
“The sexual politics of the time are investigated, and it is also brilliant that Ibrahim who plays Passepartout is a black man. That’s also something that I think is right and proper that we have a diverse cast,” says Tennant. “This is an unusual cast of characters traveling the world, but we use it to look at the racial and sexual politics of the time. I think that is the right way to tell that story in the 21st century. Not to pretend that the world was some sort of wonderful melting pot back in the 1870s. It gives us a snapshot of the world then and now,” he adds.
The production was created with the support of IDC (Industrial Development Corporation) of South Africa, CNC (Centre National du Cinema) in France, the Romanian government, and the Creative Europe Program MEDIA. Sales are being handled by Federation Entertainment.
optional screen reader