Home Woman Emma Beddington tries ballroom dancing This is the closest I have been... 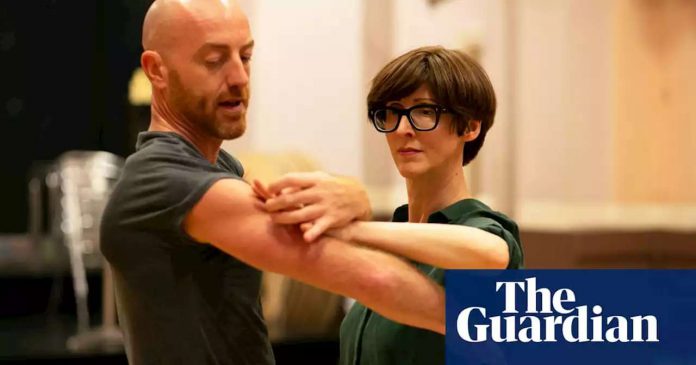 My dance instructor has students as old as 90, so he shouldn’t be fazed by a hunched 46-year-old with no rhythm and keyboard-gnarled claws for hands

Joel Chapman
. A former competitive Latin and ballroom dancer, he trained with some of the Strictly pros and started his own dance school at 21. He has taught pupils as old as 90 – one has Alzheimer’s (“She comes and we just do a few steps,” he says, rather touchingly) – so a hunched 46-year-old with keyboard-gnarled claws for hands and no rhythm shouldn’t faze him. “I prefer to teach beginners, because I’m bringing them the joy of a whole new idea of dance,” he says. I want joy; everything feels flat and hard in this weary pandemic netherworld autumn. No wonder the return of Strictly’s camp and glitz has been greeted with such delight.
Joel is teaching me to waltz. We start by walking through the basic steps: back on the right, to the side, feet together; then forward on the left, to the side, close your feet. “Waltz is all about the rise and fall. If you watch professional dancers, they’ll be creating big shapes,” says Joel, spinning round the room in a graceful arc. That means I need to lunge on the first beat, rise up on tiptoes on the second, then “soften”, all without looking as if I am circuit training, or in an oompah band. It doesn’t sound desperately hard, but, for the first time in two years, I am wearing heels. I bought these patent dancing shoes for entirely aesthetic reasons; now that I am using them for their intended purpose, it’s a wobbly business.
It’s time to try the footwork in “practice hold”: me grasping Joel’s forearms. It feels quite transgressive; this is the closest I have been to a stranger in a while. Proper “hold” is even weirder. We are millimetres apart, with bits of us touching. The last time that happened was probably on the Central line in 2019. It’s a strange blend of intimate and technical: elbows out, shoulders back, spine straight, my right thumb against his left, my left hand on his right biceps, with “flared fingers” – pinkie and index raised. Then there is the head: neck long, chin high, gaze inexplicably directed over your left shoulder, like Lady Grantham ignoring a social climber in that other show I was never allowed to watch. “Ballroom is a very antisocial type of dancing really,” Joel says. “Although we’re together, we’re not even looking at each other.”
‘I am pretty sure I look like I am trying to shoo a pigeon.’
Photograph: Richard Saker/The Observer
There is also the vexed question of leading and following, men and women.

“I have a lot of conversations with my students about what that means in the 21st century,” says Joel. Modern ballroom is apparently more egalitarian: the person dancing backwards is the “rudder”, setting the direction; the one dancing forwards is the “engine”, driving the movement. “Both are following and both are leading, and that’s what creates the beauty.” That means another thing for me to remember: power forward, then initiate the turn when I am going backwards.
Somehow, now, I need do all this while moving around to music. It’s a big ask for someone who often holds her hands up to distinguish left and right, but, as Brian Evans croons, occasionally all the moving parts come together. We can almost manage a circuit of the room, as long as Joel hisses instructions on every step. I am in good company: the Strictly pros do that, too, he says. “The little whispering … you can see them going ‘three, four, five’!”
To finish, we switch to the cha-cha-cha, so I can try “a bit of Latin”. This is less successful: I am as Latin as an eccles cake and it shows. “Push your bum out, hips back, push the pelvis back,” Joel encourages, demonstrating extravagantly; I shuffle stiffly, pelvis uncooperative. Despite this, we throw in “a couple of showy moves”. A New York step involves flinging my arms up and spinning. I am pretty sure I look like I am trying to shoo a pigeon. “Fantastic work!” Joel lies.
His enthusiasm and booming all-caps encouragement are a big part of what makes this fun. Whenever I get “BEAUTIFUL” or “LOVE IT”, I hear myself emit a mortifying high-pitched giggle. The occasional steely “NO” when I stick a leg somewhere egregiously wrong is thrilling, too, in a different way. “There’s no reason to ever be down on yourself with dance,” says Joel. “As long as you leave the studio feeling you improved something, that’s a win.”
I have definitely improved something: my mood. Researchers are still trying to untangle how and why the combination of music, memory, movement, concentration and touch in dance is so good for you (or “found to correlate with positive behavioural effects in a variety of populations”, as
). But there is some kind of joyful alchemy at work, for sure. They should make a TV show about it.
AJ Odudu or Ann Widdecombe?
I don’t see Blackpool in my future.
Smug points
I am glowing all day like a freshly spray-tanned sportscaster.
5/5