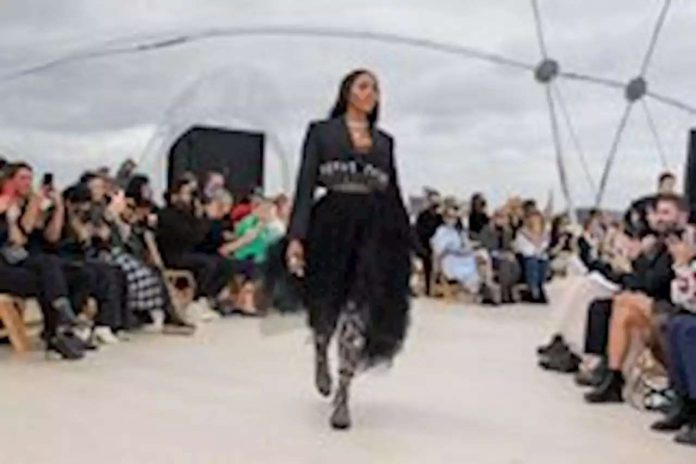 staged a homecoming of sorts in London this morning for its Spring 2022 collection — the first showed in front of a live audience since the start of the pandemic.
Related |
Paolo Roversi Reunites With Alexander McQueen for ‘Anemones’ Collection
The brand, which usually shows at Paris Fashion Week (which just wrapped up last week), set up a giant transparent bubble dome on the rooftop of a 10-story warehouse in East London, which would have been perfect in case of rainy weather but, alas, the skies were clear as day.
Courtesy of Alexander McQueen
The audience was made of mostly local press plus well-known supporters of the brand like Vanessa Kirby, Emilia Clarke and Daphne Guinness (who, according to WWD, said this was her first McQueen show since the designer’s death in 2010).

Naomi Campbell closed the show in a cropped blazer and tulle skirt ensemble with crystal embellishments.
“I am interested in immersing myself in the environment in which we live and work, in London, and in the elements as we experience them each day,” creative director Sarah Burton said in a statement of the collection, which was inspired by storm chasers.”Storm chasing is not only about the beauty of the views but also a sense of mystery and excitement – about embracing the fact that we can’t ever be sure of what might happen next.”
See the entire show in the video, below.
Top photo via Getty

Turn Up Turn Down Influencers Show 3 Ways to Wear Cozy...

Why Shaming Teens or Kids Shouldn’t Be Part of Parenting