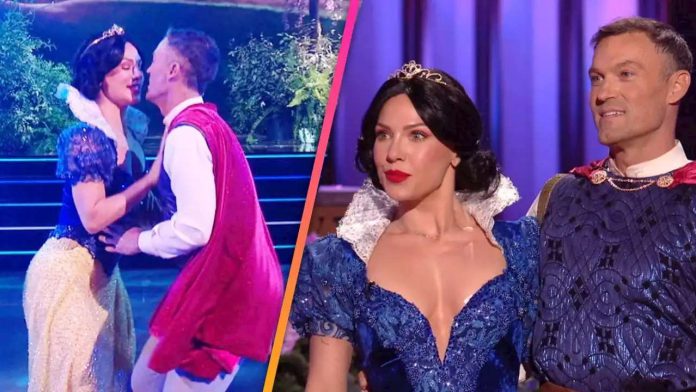 The real-life couple got booted off the show after Tuesday’s Disney Villains Night.

brutal and surprising double elimination
following back-to-back nights of Disney-themed dances.
After all 13 remaining couples delivered their performances on Tuesday’s Disney Villains Night, host Tyra Banks revealed which three couples were in the bottom two. It came down to Burgess and Green as well as Kenya Moore and Brandon Armstrong, and Matt James and Lindsay Arnold.
Having earned the lowest combined score from the judges and lowest total number of viewer votes, Green and Burgess got the axe without getting a chance to be saved by the judges. Ultimately, the judges voted and James was the second celeb of the night to get the boot.
Burgess and Green took the elimination in stride as they smiled and waved to the audience while exiting the stage after Banks revealed their fate.
The elimination didn’t seem to be too much of a surprise for the pair, which only makes sense considering their lackluster scores for their waltz on Monday and for Tuesday’s paso doble.

For Villains Night — which was better received from the judges — the pair hit the dance floor to deliver a
Pirates of the Caribbean
-inspired number. Green was decked out as Captain Barbossa, while Burgess took on the Jack Sparrow role.
Speaking with ET
, Green elaborated on what the stakes of competing as Burgess’
DWTS
partner really were when it came to their relationship.
“When we first started dating she always said that one of her dreams with me was, ‘Hey, we’ll dance together one day.’ And then [I realized], if I suck at this, she’s gonna have to write off that dream and be like, ‘Oh, we’ll get into skydiving I guess,” Green said.”I didn’t want her to have to write that dream off because I was terrible at it.”
Check out the video below to hear more.
airs Mondays at 8 p.m. ET/PT on ABC.
GET THE ET NEWSLETTER

MeghanMarkle is being accused