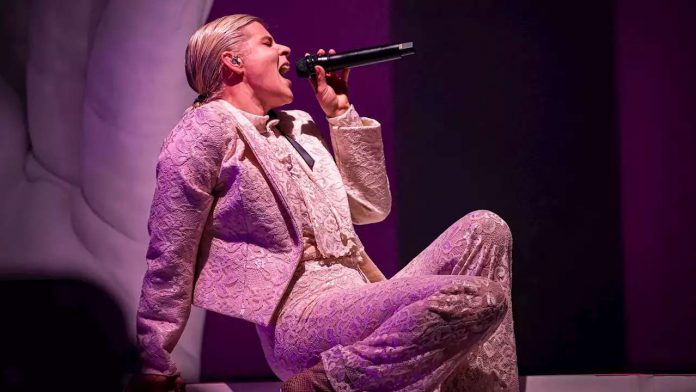 has linked up with Smile — the duo of Swedish producer Joakim Åhlund and Peter Bjorn and John’s Björn Yttling — for a new song, “Call My Name.” The track will appear on Smile’s upcoming album,
Phantom Island
, out November 19th via Chimp Limbs/Ingrid.
“Call My Name” has a peppy vintage pop vibe as the drums shuffle with a dusty tap while guitar lines and piano runs twinkle off into space. “This world might seem like a lonely place,” Robyn sings on the hook, “But anything you need, call my name/I’ve got two strong hands to keep you safe/Anything you need, call my name.”
In a statement (per
Pitchfork
), Åhlund said “Call My Name” had been kicking around for a while, “But when Robyn sang it, she really lifted it to another level, her vocal is just packed with so much emotion.” (Åhlund was one of Robyn’s collaborators on her 2005 self-titled album, as well as 2010’s
Body Talk
).

“I love singing ‘Call My Name’ and it was a true pleasure to record it and rave around in this beautiful song together with Joakim and Björn,” Robyn added.

In other Robyn-adjacent news, the singer’s perennial classic “Dancing On My Own” started making the rounds again thanks to an unexpected source — the Boston Red Sox. After the Sox beat the Tampa Bay Devil Rays to move on to the American League Championship Series, the big beefy baseball boys celebrated in their locker room with plenty of champagne and by belting the song at the top of their lungs.

Thanks to the magic of the internet, the video eventually caught Robyn’s attention, who tweeted the perfectly succinct “Bonkers.”
Bonkers

Midland on Checking Into ‘The Last Resort’ for New EP Being...